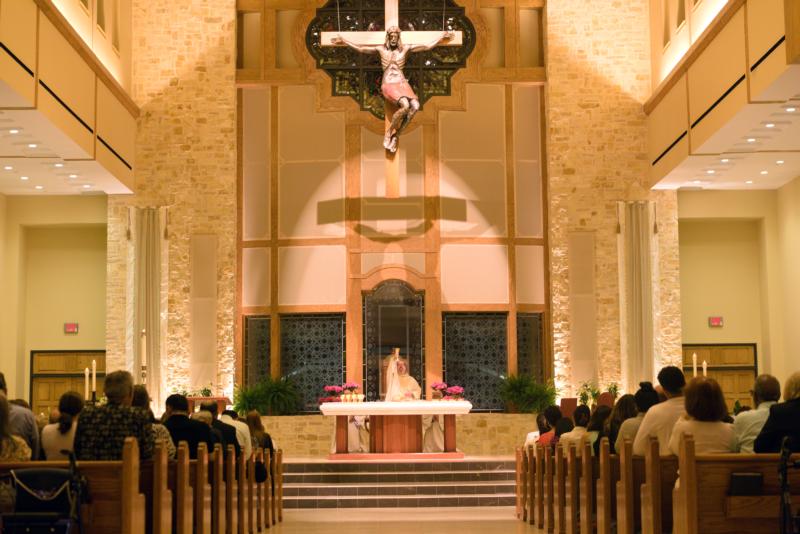 Father Sean Horrigan celebrates Easter Vigil Mass April 15, 2017, at Christ the Redeemer Catholic Church in Houston where he is pastor. A Jan. 17, 2019, shooting prompted the parish to work to console the victims of the violent incident, where a 62-year-old man shot his 66-year-old estranged wife and seriously injured their 31-year-old daughter. (CNS photo/James Ramos, Texas Catholic Herald)

HOUSTON (CNS) — The morning after a man gunned down his estranged wife and critically wounded their daughter, visitors and parishioners gathered Jan. 18 for a Mass inside the Christ the Redeemer Catholic Church, just yards away from the parish parking lot, where the shooting took place.

The “beautiful” Mass was “well-attended,” according to Father Sean Horrigan, pastor.

The quiet gathering was a stark contrast to the previous night that was shattered by gunshots: Arthur Edigin, 62, had shot into the car of his wife, Graciela Torres, 66, his daughter Penny Edigin-Zapata, 31, and his 17-month-old granddaughter.

“The reality of the evil of domestic violence played itself out in our presence last night, but we cling to the love and goodness of God in times of such trials,” Father Horrigan said. “We seek to be bearers of light and peace in the world, and work to provide a place of safety and surety for all who face such realities in their homes.”

Even though the shooting victims were not parishioners at the northwest Houston church, Father Horrigan gave his assurance the Catholic Church stands with and for them and all affected by domestic violence.

“God brought them to us and we will respond as Christ to them,” he said. “If you or anyone you know is experiencing such physical or emotional abuse in the home and don’t know where to turn, please let us know. We will work to make sure you are safe.”

During the morning Mass, Father Horrigan offered prayers for those affected by the shooting. Police said the toddler was not hurt. Edigin-Zapata was critically injured and was recovering in the hospital, according to parish officials who confirmed her condition with her husband.

“We assured him of the prayers of our community for his wife and entire family,” Father Horrigan the Texas Catholic Herald, newspaper of the Archdiocese of Galveston-Houston. “We pledged our support to the family during this time of recovery and we’ll be continuing our conversation with him on how we can best minister to the needs of his family.”

The victims were said to be attending an English as a Second Language class being hosted at the parish church by a local assistance group.

Late in the evening Jan. 17, local law enforcement mounted a manhunt for Edigin, the suspected shooter, after he fled the church grounds. The search ended the same morning of the Mass with his apparent suicide after an hours-long standoff and negotiations with officials at an extended-stay hotel some 30 minutes away.

Ministry groups on campus, such as the Ladies Auxiliary and St. Anne’s Society, immediately responded “selflessly and beautifully,” Father Horrigan said. They offered “compassion and presence to those in need. They cared for the child of the wounded mother until her father could arrive and she was in very good hands.”

While the parish’s school across campus was not in session during the evening shooting, the school was open for an open house event. Administrators and faculty immediately went into lockdown mode, Father Horrigan said.

“Our teachers and staff train for this on a regular basis and they followed procedures properly to safeguard all who were around them,” he continued. “We are grateful for (the) thoroughness and professionalism” of the local sheriff’s office.

Zapata-Edigin’s family members had set up a GoFundMe account to help cover her medical expenses and her mother’s funeral costs. It has reached more than $5,000 of its $40,000 goal.

According to local law enforcement, domestic violence homicides in Houston increased by 38 percent in 2018, with that increase accounting for 20 percent of all homicides in the city. In 2017, 136 women were killed by a male intimate partner in Texas, said the Texas Council on Family Violence.

That same year, the Centers for Disease Control and Prevention reported that nearly half of female homicide victims were killed by a current or former male intimate partner.