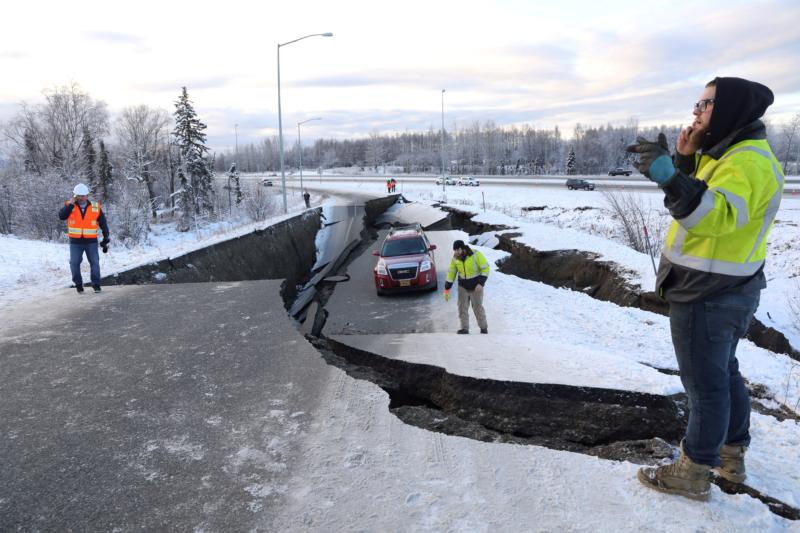 First responders stand on a collapsed roadway near the airport after a magnitude 7.0 earthquake Nov. 30 in Anchorage, Alaska. (CNS photo/Nathaniel Wilder, Reuters)

EAGLE RIVER, Alaska (CNS) — St. Andrew Parish in Eagle River, 10 miles from the epicenter of the magnitude-7.0 earthquake that shook the region Nov. 30, is facing steep repair bills as it suffered the greatest damage of any church in the Archdiocese of Anchorage.

The cost to fully repair the building will exceed the parish’s insurance deductible of about $650,000, according to Father Arthur Roraff, parochial administrator at St. Andrew, who noted that the repair bill could approach $1 million.

The parish has started a GoFundMe campaign to help raise money for the repair costs.

Despite the damage, the situation could have been worse. The day the earthquake hit, Nov. 30, is also the feast of St. Andrew. Instead of having its usual 9 a.m. Mass, Father Roraff moved the Mass time to 7 p.m. to allow more people to attend. The quake struck at 8:29 a.m. “Many more people would have been in the church preparing, greatly increasing the possibility of injury or worse,” Father Roraff wrote on the parish’s GoFundMe page.

The damage was bad enough to the 12-year-old church as it was. Chandeliers crashed to the floor, statues were smashed to pieces, stained-glass art shattered, whole pieces of Sheetrock fell from high above the pews, and furnace boiler pipes separated, spewing compounds all over the floor. The roof drain also pulled away from the wall, causing rain and water to damage the office area, and a three-quarter-inch crack opened up the floor in front of the sanctuary, running across the entire nave of the church.

The parish still has $5 million to go before it pays off the construction debt on the church.

“Despite substantial damage to our beautiful church building, the church’s structural engineer determined that the structure was still safe to occupy, so we continued with our St. Andrew’s Day Mass that evening,” Father Roraff wrote. Mass was celebrated in the church’s narthex instead, but in candlelight and with worshippers wearing their winter coats because the electricity and heat were still out.

Electricity was restored before midnight Nov. 30, and the heat was back on before the regular weekend Mass schedule Dec. 1, Father Roraff reported.

More than 100 parishioners descended upon the church Dec. 1 to clear away the debris and make the church usable for weekend Masses, according to Father Roraff.