At rally Catholic youth, young adults from near and far stand up for life 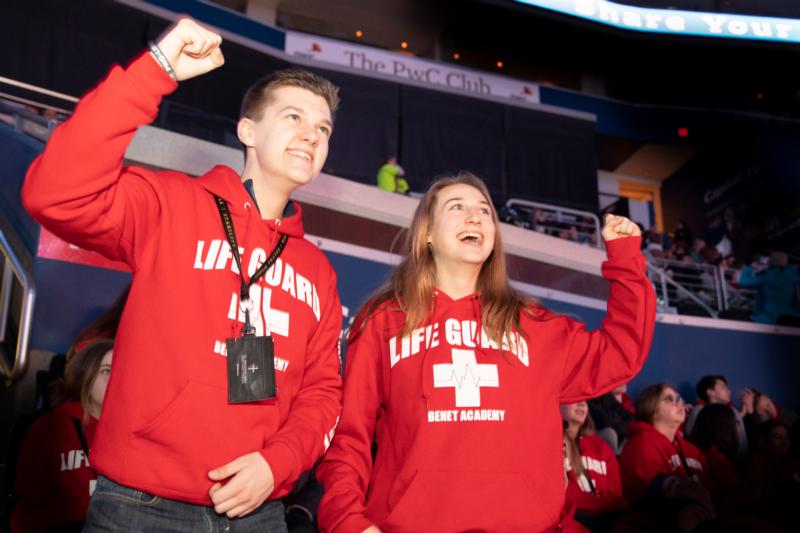 At the Archdiocese of Washington’s Jan. 18 Youth Rally for Life at the Capital One Arena, Matteo Caulfield and Caroline Rotkis, seniors from Benet Academy, a Benedictine school in Lisle, Ill., join fellow students from their school in wearing matching red hooded sweat jackets with the words “LIFE GUARD” emblazoned on the front. They had made a 15-hour bus ride to attend the rally, Mass and March for Life. (Catholic Standard photo by Paul Fetters)

WASHINGTON (CNS) — Discovering who had traveled the farthest to be at the Archdiocese of Washington’s annual Youth Rally before its Mass for Life quickly became apparent by scanning the crowd of young people near the stage at the Capital One Arena.

Among the estimated 18,000 people in the arena was Monica Pazniewski, waving a life-sized inflatable yellow plastic kangaroo with green boxing gloves. She had journeyed with a group of about 120 young adults from Sydney, Australia, who stopped in Washington to join the March for Life Jan. 18 before continuing on to World Youth Day in Panama.

The 23-year-old Catholic, who is studying physical therapy at her college Down Under, said she had come to the Youth Rally and Mass for Life preceding the march “because I believe every human life has dignity and value, and I want to stand up for everyone.”

Next to her sat a fellow Aussie, Sarah Alimangohan, who had small temporary tattoos of the Australian flag on both sides of her face. The young woman, also 23, recently earned her degree in fashion and textiles. “I want to stand up for the voiceless,” and for “the truth that there’s beauty in our lives,” she said.

Mitchell Gallagher, 20, who does catering work in the Sydney area, said: “It’s important for people to come together and support unborn children and also mothers … who sometimes feel they don’t have a choice, who feel alone and isolated.”

He added, “One day we young people will be in leadership roles. It’s important to show a strong stance of where we are, that we’re supporting life.” That might mean opposing laws or cultural trends, he said. “We can change it.”

Joining the young adults was Sydney Archbishop Anthony Fisher. “I have known about the March for Life for decades,” he told the Catholic Standard, Washington’s archdiocesan newspaper. “This is my first time. I’m excited to be here. … This is just ideal to make a pilgrimage for life on the way to World Youth Day. We’ll get double bang to the buck.”

The archbishop noted, “For us to see so many people standing up for life is inspiring. Who knows, maybe someday we might do the same in Australia.”

The pro-life cause helped inspire his own vocation when he was young, he said. “When I look at them and their idealism, it reminds me of the spark of my faith. It helps renew my ideals. … It gives me hope the next generation will do great things.”

Also near the stage were students and teachers from St. Mary’s School in the Washington suburb of Rockville, Maryland.

“I’ve always been very passionate about life because I was born prematurely,” said Olivia Crosby, who teaches religion and science to sixth-, seventh- and eighth-graders at St. Mary’s. “This is an opportunity to be here with my students. They get to see they’re not alone in their Catholic faith and in their desire to affirm life. … I hope it fills their hearts with joy and courage and a desire to be a witness for Christ.”

At the Capital One Arena, the Washington Capitals’ red 2018 Stanley Cup banner honoring the championship hockey team hung from the rafters. Many of the students participating at the rally wore colorful matching hats or sweat jackets.

In one section, 60 students from the Academy of the Holy Cross in Kensington, Maryland, wore matching purple knit caps displaying the words “AHC FOR LIFE,” and many wore pullovers or sweatpants also displaying their school’s colors.

“We all here believe in the dignity and value of every life, and we support and advocate for those who don’t have a voice yet,” said Cecilia Rogers, a senior at Holy Cross.

Asked why she had come to the rally, Jennifer Olcott, also a Holy Cross senior, said: “For me, it’s to give courage to mothers who are pregnant and contemplating whether to have a baby. When they see all the people who come to march, they’ll know they’re not alone, and there will be people for them.”

The speakers at the rally included Obianuju Ekeocha, the founder and president of Culture of Life Africa, an initiative that promotes African values of sanctity of life, the beauty of marriage, the blessings of motherhood and the dignity of family life.

“We are here to end the human rights crisis that is abortion,” she told the crowd, noting other historical assaults against humanity, like slavery, the Holocaust and the Rwandan genocide. “Laws come and go, but universal truths remain,” she said. “Human life begins at conception, without exception.”

Ekeocha encouraged the young people to stand up for life at their schools, in their families and with their friends. Noting that she studied microbiology in Nigeria, she said scientific facts about the development of the unborn child show that being “pro-life is pro-science,” which was the theme of the 2018 March for Life.

The message board ringing the arena’s middle section encouraged students to use #Mass4Life or #iStand4Life or #WhyWeMarch to use social media to promote their pro-life stance, and many students held small placards with those hash tags.

Sister Maria Juan — a Religious Sister of Mercy of Alma, Michigan, who was an emcee at the rally — led the crowd in a pro-life rap and then started a wave that cascaded through the arena, with young people jumping up and waving their arms in unison, section by section. “I’ve always wanted to start the wave!” she said.

Filling up one corner section of the arena were about 150 students from Benet Academy, a Benedictine school in Lisle, Illinois, who wore matching red hooded sweat jackets with the words “LIFE GUARD” emblazoned on the front. They had made a 15-hour bus ride to attend the rally, Mass and march.

Matteo Caulfield, a 17-year-old senior at Benet Academy, said, “I’ve been here every single year for four years. I have a younger brother adopted from China, and I know he’s an irreplaceable part of my life. I’m here because I want to stand up for lives like his throughout the world. People need to know adoption is an option.”

His classmate Caroline Rotkis, who turns 18 in February, was attending her first March for Life. “As a woman, I don’t have to buy into the lie that abortion helps women. It hurts them,” she said.

Both students said it was inspiring to be a part of the Rally for Life.

“It’s absolutely insane to see this many fellow Catholics in one place,” said Rotkis.

Caulfield added, “It’s really cool. We’re all one body in Christ, and we can really see that when we all come together.”

On the back of the Benet students’ sweat jackets was a quote from Jeremiah 29:11 — “For I know the plans I have for you … plans to give you hope and a future.”

To Caulfield, those words offered a reminder that it’s part of God’s plan “to keep my faith in my life and make it a more important part of my life, (so) I can celebrate it publicly. I know that God is opening the right doors for me. In all things I do, God can be glorified.”

NEXT: Naumann: ‘Let’s pray we can be effective witnesses’ for life, love, mercy