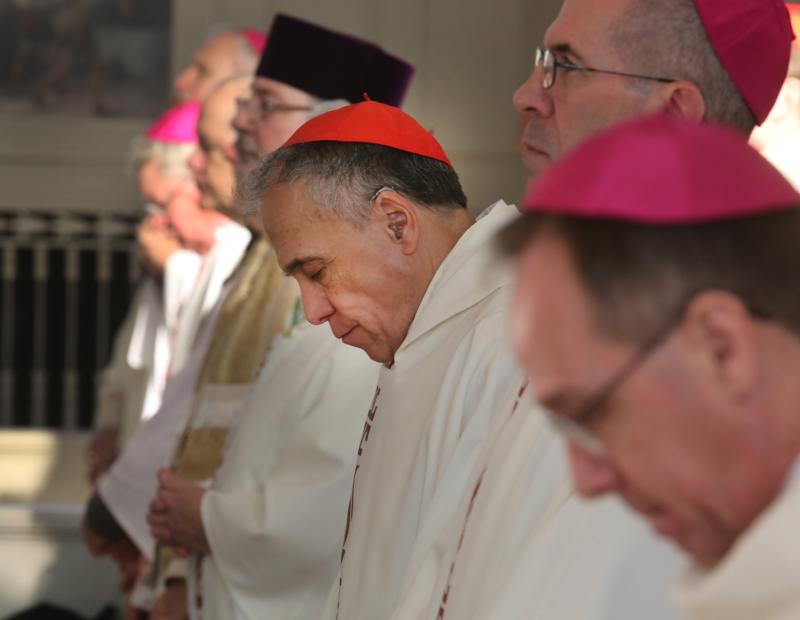 Cardinal Daniel N. DiNardo of Galveston-Houston, president of the U.S. Conference of Catholic Bishops, bows his head in prayer during Mass in the Chapel of the Immaculate Conception at Mundelein Seminary Jan. 3 at the University of St. Mary of the Lake in Illinois, near Chicago. The U.S. bishops were on retreat Jan. 2-8 at the seminary, suggested by Pope Francis in September, which comes as the bishops work to rebuild trust among the faithful as questions continue to revolve around their handling of clergy sex abuse. (CNS photo/Bob Roller)

UPDATED – WASHINGTON (CNS) — Although the weeklong retreat for U.S. Catholic bishops emphasized quiet reflection, several bishops spoke out on social media during the retreat and after it wrapped up Jan. 8 with positive reaction about it and to give shoutouts to the retreat leader, Capuchin Father Raniero Cantalamessa, who has preached to popes and top officials of the Roman Curia for nearly 40 years.

One bishop said listening to Father Cantalamessa was akin to being in the presence of the early Christian theologians. “Clear, intensely filled with the Holy Spirit, and all for the Kingdom of God,” Auxiliary Bishop Michael J. Boulette of San Antonio said in a tweet. “Let us continue to pray for one another, our church and our world. A blessing to be here!”

Archbishop Paul D. Etienne of Anchorage, Alaska, tweeted that the retreat leader was a “true instrument of the Lord” and that the Holy Spirit was at work during the retreat.

He tweeted that he was glad they had time to reflect and pray about their role as shepherds, stressing: “We must start there to be able to offer healing. I am taking this very seriously but feeling positive.”

Boston Auxiliary Bishop Mark W. O’Connell said it was a “truly blessed experience” to be on retreat with Father Cantalamessa and fellow U.S. bishops.

“The Holy Spirit was powerfully present, and I was quite moved,” he tweeted. He also thanked the pope for giving the bishops this gift.

Pope Francis suggested the bishops hold the retreat and offered the services of the 84-year-old Father Cantalamessa, who has served as preacher of the papal household since 1980. The time of prayer Jan. 2-8 at Mundelein Seminary at the University of St. Mary of the Lake near Chicago was planned largely in response to last summer’s revelations of allegations of sex abuse that reached the highest levels of the U.S. church.

In a Jan. 8 column for Angelus News, the archdiocesan news outlet of Los Angeles, Archbishop Jose H. Gomez of Los Angeles said the bishops’ retreat leader focused “our attention on the vocation and responsibility of bishops in this moment in the church.”

“We are praying together as a visible sign of our unity as bishops and our communion with the Holy Father. There is a collegial spirit here and a firm commitment to address the causes of the abuse crisis we face and continue the work of renewing the church,” he added.

The archbishop said Father Cantalamessa asked them to “trust more in the Holy Spirit. We need to have confidence that we are always living in God’s loving presence.”

He said they heard about the need to emphasize in their preaching the fundamental belief in Jesus before delving into his message and teachings.

He also said Father Cantalamessa emphasized the need to root out “love of money” and all that it implies, including material possessions, honor or power.

“If this pursuit for ‘money’ needs to be rooted out from our Christian lives, then we need to embrace a true spirit of detachment,” the bishop wrote, adding that he would add more to that topic in the days ahead.

The theme of the U.S. bishops’ retreat was “the mission of the apostles and of their successors” drawing from Mark 3:14, which says Jesus “appointed 12 — whom he also named apostles — that they might be with him and he might send them forth to preach.”

Reflections from the retreat do not seem to be about the crisis in particular, maybe for a reason.

In an email to Catholic News Service weeks before the retreat, Father Cantalamessa said he would “not talk about pedophilia and will not give advice about eventual solutions; that is not my task and I would not have the competence to do so.”

“The Holy Father asked for my availability to lead a series of spiritual exercises for the episcopal conference so that the bishops, far from their daily commitments, in a climate of prayer and silence and in a personal encounter with the Lord, can receive the strength and light of the Holy Spirit to find the right solutions for the problems that afflict the U.S. church today,” he added.

In a Jan. 9 column for the Chicago Catholic, the archdiocesan newspaper, Chicago Cardinal Blase J. Cupich said the pope’s intention for the retreat went beyond “this particular moment or challenge facing us bishops.”

“We are not leaving this retreat with all the answers to the important questions facing the church in these days,” he wrote, but he said the bishops now have a renewed sense of the importance of taking their cues from “Christ’s spirit rather than our own efforts.”

Another blessing from the week, he said, was being drawn closer to each other and to the pope.

“I have no doubt that just as the early church relied on Peter’s unique ministry to meet the challenges of the day, so we will draw strength and insight from our unity with his successor,” he said.

NEXT: U.S. can both secure border and treat migrants humanely, says bishop