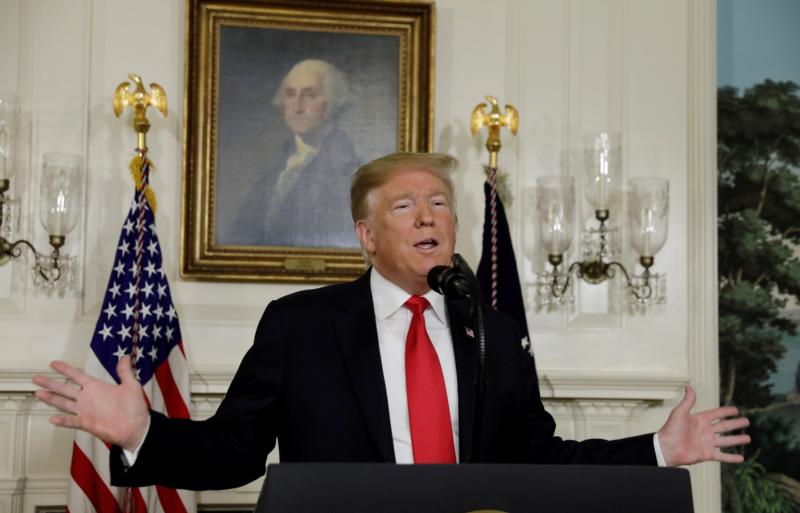 U.S. President Donald Trump delivers remarks on border security and the partial shutdown of the U.S. government from the Diplomatic Room at the White House in Washington Jan. 19. (CNS /Yuri Gripas, Reuters)

WASHINGTON (CNS) — President Donald Trump and Congress “must come together” to reach a bipartisan solution that reopens the government and “recognizes the economic struggle” now facing federal workers and their families and all those helped by federal nutrition and housing programs, said two U.S. bishops.

Cardinal Daniel N. DiNardo of Galveston-Houston, president of the U.S. Conference of Catholic Bishops, and Bishop Joe S. Vasquez of Austin, Texas, chairman of the USCCB Committee on Migration, issued a joint statement late Jan. 20 in reaction to a plan announced a day earlier by Trump.

They said they were encouraged by the president’s plan to provide protections for beneficiaries of the Deferred Action for Childhood Arrival program, known as DACA, and those covered by Temporary Protected Status, or TPS, but said such protections must be permanent, not temporary, as Trump has proposed. “A permanent legislative solution” for TPS holders and DACA recipients “is vital,” they said.

Cardinal DiNardo and Bishop Vasquez reiterated the strong objection the U.S. bishops and Mexico’s bishops have to construction of “a wall” across the U.S.-Mexico border, and expressed concern Trump’s latest proposal will make changes “in current law that would make it more difficult for unaccompanied children and asylum seekers to access protection.”

Elements of the proposal Trump announced Jan. 19 from the Diplomatic Room at the White House include $5.7 billion to fund a “steel barrier” system, including technology, in “priority areas” on the southern border as identified by the U.S. Border Patrol.

He also said he would provide three years of protection from deportation for DACA recipients and those currently protected by TPS.

“Throughout our parishes, there are many DACA youth and TPS holders, who have lived substantial parts of their lives in the U.S. contributing to this country,” Cardinal DiNardo and Bishop Vasquez said. “We listen and understand the fear and uncertainty they and their families face and the anguish that they are currently experiencing as their existing immigration protections hang in the balance and come to an end.

They said that “temporary relief will not ease those fears or quell that anxiety,” which is why the Catholic bishops “have long advocated for comprehensive immigration reform; reform that will provide permanent solutions: including border security, protection for vulnerable unaccompanied children and asylum seekers, and a defined path to citizenship to enable our immigrant brothers and sisters to fully contribute to our society.”

Cardinal DiNardo and Bishop Vasquez said they looked forward “to reviewing the president’s proposal in detail and hope to work with the White House and Congress to advance legislation that shows compassion, keeps us safe and protects the vulnerable.”

Elements of the proposal Trump announced Jan. 20 from the Diplomatic Room at the White House

Created by President Barack Obama by an executive order in 2012, DACA has helped young adults brought into the country illegally as minors. It does not give them legal status but provides a work permit, reprieve from deportation and other temporary relief to those who qualify.

In September 2017, then-U.S. Attorney General Jeff Sessions said the Trump administration was ending the program through executive action. Trump called on Congress to help find a solution to help the young adults, but Congress did not act to save the program and instead Trump’s decision to end it has faced numerous court challenges.

Various courts have ruled Trump cannot end the program, which was created by President Barack Obama via executive order in 2012. The last such ruling came in August 2018 when a federal judge in said the program must be made whole again and that includes taking new applications. That ruling has since been appealed.

The temporary status is afforded to nationals from some countries affected by armed conflict or natural disaster, allowing those eligible to live and work in the United States for a limited time.

Other provisions in Trump’s proposal are: $5.7 billion to fund a “steel barrier” system, including technology, in “priority areas” on the southern border as identified by the U.S. Border Patrol; $675 million for increased technology at ports of entry to detect entry of illegal drugs; $130 million for canine units, training and more law enforcement; $800 million in humanitarian assistance and medical assistance for migrants; $782 million for an additional 2,750 Border Patrol officers; and $563 million to hire 75 new immigration judges to address “the logjam” of some 800,000 cases in the nation’s immigration courts.

The president also said he wanted to start holding weekly bipartisan meetings at the White House to discuss immigration reform.

In a statement released before Trump’s announcement, House Speaker Nancy Pelosi, D-California, had already rejected anything the president might propose saying: “Democrats were hopeful that the president was finally willing to re-open government and proceed with a much-need discussion to protect the border.”

“Unfortunately … his proposal is a compilation of several previously rejected initiatives, each of which is unacceptable and in total do not represent a good faith effort to restore certainty to people’s lives,” said Pelosi. “It is unlikely that any one of these provisions alone would pass the House, and taken together, they are a non-starter.”

Congressional lawmakers who support for Trump’s proposal said that his offer to give DACA recipients a three-year reprieve from deportation was not unlike the proposed BRIDGE Act, or Bar Removal of Individuals who Dream and Grow our Economy Act.

The bipartisan legislation was introduced in the House and Senate in 2017 and would have allowed people who are eligible for or who have received work authorization and temporary relief from deportation through DACA to continue living in the U.S. with permission from the federal government.

House Minority Leader Kevin McCarthy, R-California, said in a tweet that “Trump has put forward a serious and reasonable offer to reform parts of our broken immigration system and reopen government. The moment now turns to Nancy Pelosi and (Sen.) Chuck Schumer. The country is watching.”

An aide to Senate Majority Leader Mitch McConnell, R-Kentucky, told The New York Times the senator was expected to introduce legislation as early as Jan. 22 that would include Trump’s proposal in a bigger package that would include billions of dollars in disaster relief “and immediately reopen the government.”

NEXT: After initial outrage, claims of racism, clearer details of exchange emerge