Donation drive at SEEK2019 gets attendees ‘more invested in mission’ 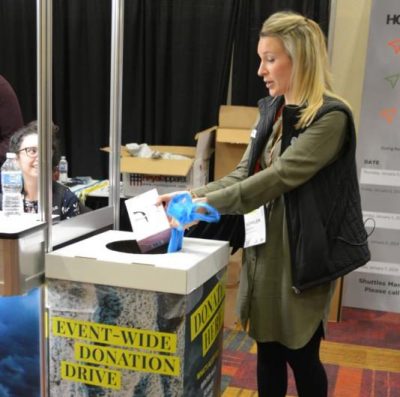 Schyler Smith places items in a donation bin Jan. 6 during the Fellowship of Catholic University Students SEEK2019 conference held at the Indiana Convention Center in Indianapolis. This was the first year a donation drive was held during the biannual conference. (CNS photo/Natalie Hoefer, The Criterion)

INDIANAPOLIS (CNS) — The unseasonably warm weather in Indianapolis Jan. 3-7 was good news for the 17,000 participants of the Fellowship of Catholic University Students’ SEEK2019 conference in Indianapolis.

It was also good news for the city’s homeless.

According to the National Alliance to End Homelessness, nearly 1,700 people are sleeping in temporary shelters, transitional housing or on the streets on any given night in Indianapolis.

Those people had more good fortune than just mild temperatures during the FOCUS conference. They benefited from a donation drive.

SEEK attendees filled 30 50-gallon bags with winter hats, gloves, scarves and socks, as well as toothbrushes, toothpaste, deodorant and other hygiene items — all to help the homeless and others in need in the city.

The items were donated to two ministries for distribution. One was the Garden Door Ministry of St. John the Evangelist Parish in Indianapolis, located next to the Indiana Convention Center where the conference was held. The other was Archdiocese of Indianapolis’ Catholic Charities, where Theresa Chamblee serves as director of social concerns.

“The SEEK participants blew me away with their overwhelming generosity of donations,” she said. “I just knew those attending the SEEK conference would be generous, but their generosity exceeded my expectations.”

Kathleen Tierney agreed. She is coordinator of the Garden Door Ministry, which feeds and clothes the homeless who live near the downtown parish.

“I’m overwhelmed by the (charity of the) SEEK participants,” she told The Criterion, Indianapolis’ archdiocesan newspaper. “But at the same time, it’s not surprising, because the people who are involved in the FOCUS movement, their faith is lived in service. We’re very grateful and very humbled by their generosity.”

This year marked the first time a service project was incorporated into the biannual SEEK conference. The drive was sponsored by FOCUS Greek, a branch of FOCUS particularly involving college students who are members of a fraternity or sorority.

A statement issued by FOCUS Greek explained that the donation drive “will provide an opportunity for Greek students and missionaries to be more deeply invested in the mission.”

“Philanthropic events and service are an integral part of Greek life, and each year, collegiate fraternity and sorority students raise thousands of dollars for their designated philanthropic charity or organization,” it said. “Similarly, FOCUS Greek is sponsoring the donation drive, (and) all conference participants are invited and encouraged to participate.”

FOCUS, started in 1998, seeks to form intentional disciples by send missionaries to colleges and universities. There are currently FOCUS missionaries serving on more than 150 campuses around the world.

Indiana University-Purdue University Indianapolis is one of three FOCUS campuses in the Archdiocese of Indianapolis. St. John the Evangelist serves as the faith home for the two universities’ FOCUS missionaries and many of its Catholic students.

Choosing the parish’s Garden Door Ministry as a recipient of the collected items was a way for FOCUS to contribute to a parish so involved in the organization’s mission.

And selecting the archdiocese’s Catholic Charities — which celebrates its 100th anniversary this year — was a way to give back to the community that hosted SEEK2019.

Chamblee noted that Catholic Charities “touches of the lives of over 150,000 people a year through numerous programs offered by our five central and southern Indiana agency locations.”

She said the items donated by SEEK2019 participants will go to four specific Catholic Charities ministries:

— Holy Family Shelter, which houses approximately 350 families and more than 500 children each year.

“We originally expected to get 25 50-gallon bags-worth of donations,” said Chamblee. “In the end, we had enough to fill 30 bags.

“Many of the donations we received such as the winter hats, gloves, scarves and hygiene items are items that Catholic Charities doesn’t regularly receive, but are so needed by many of our vulnerable neighbors within Indianapolis.”

She added that during SEEK, several people commented to her encountering many of homeless downtown Indianapolis who will receive their donations had an impact on them. “It was a humbling experience for them.”

“I know they’re appreciative from the bottom of their hearts.”

NEXT: Cardinal Wuerl wrote papal nuncio of abuse claims against predecessor in 2004