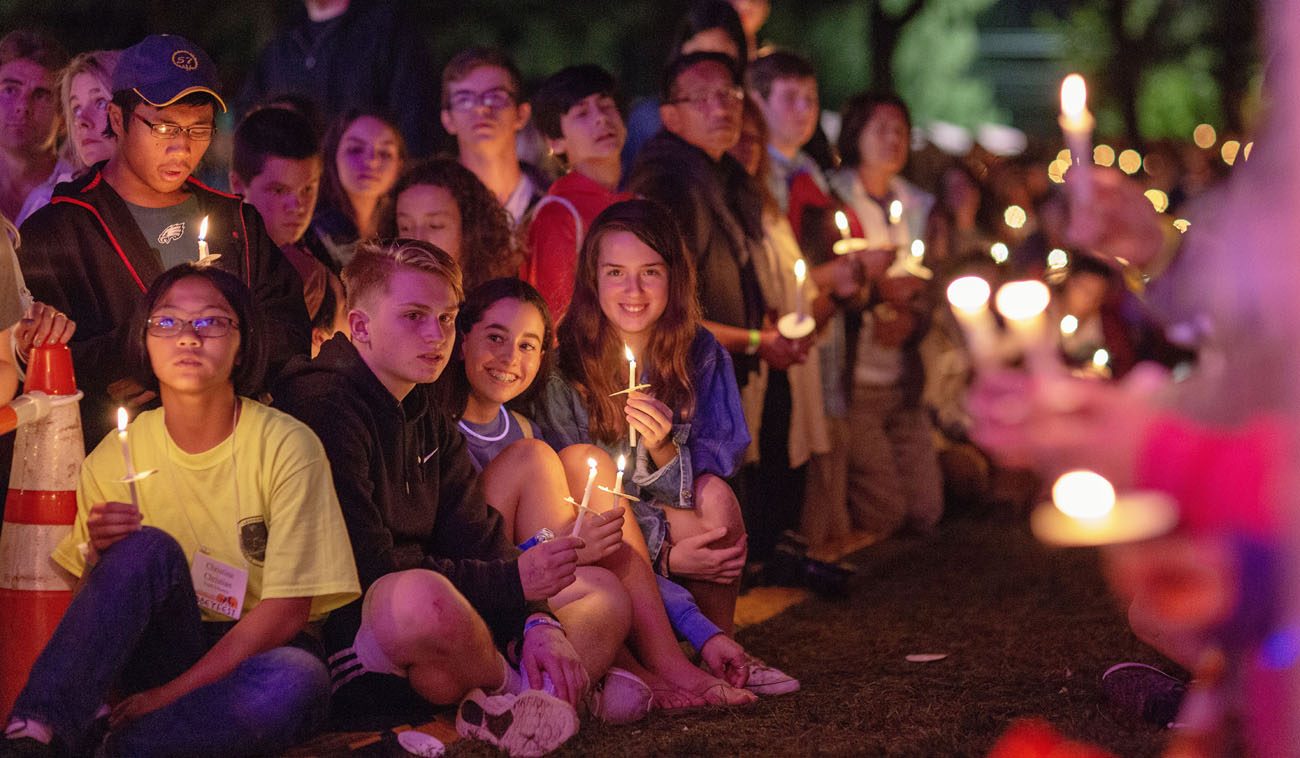 Young people pray by candlelight at AbbeyFest in September 2018 on the grounds of Daylesford Abbey, Paoli. (Photo by Michelle Kilgore)

However, the results of a wide-ranging study that surveyed the attitudes of people in as many as 35 countries suggest that happiness is tied to being religiously active.

Where Americans fit on that scale hops around a bit depending on the subject matter, according to the study, “Religion’s Relationship to Happiness, Civic Engagement and Health Around the World,” issued Jan. 31 by the Pew Research Center.

“We began with a more fundamental question about religion’s role in societal and individual well-being,” said Joey Marshall, lead researcher for Pew on the report. “That’s not a question we can definitively answer. We can’t prove religion makes people happier. But it’s an important and fundamental question.”

The research indicates, though, that happiness stretches across faith systems, as the countries surveyed embrace either Catholicism, Orthodoxy, Protestantism, Islam and eastern religions as their principal religion.

In a group of 26 nations, the United States tied for 14th in the percentage of religiously active people who say are “very happy.” Thirty-six percent of religious Americans said as much, compared to 25 percent each for their counterparts who are religiously inactive or religiously unaffiliated.

The United States finished second among 26 countries, behind only New Zealand, with 85 percent of the religiously active respondents saying they also are involved in some kind of nonreligious organization.

Those who reported being in very good health found no majority in any nation’s subgroup. However, the religiously active in the United States finished fourth out of 26, behind South Africa, New Zealand and Taiwan, in this category, with 32 percent agreeing with this description.

Abstinence from frequent drinking was reported by high percentages among all groups in all countries surveyed; the worst figure was that reported by South Korea’s religiously unaffiliated, at 78 percent. The United States finished in a five-way tie for seventh of 19 countries in this metric, with 95 percent of its religiously active population saying they do not imbibe to excess.

Nonsmokers also registered majorities across all nations and categories, although the numbers were not as high. The United States tied with China for 13th of 19 countries surveyed in this area, with 85 percent of its religiously active respondents saying they don’t currently smoke.

Pew noted that in the U.S. and 13 other countries listed in this category, the differences among these groups “are not statistically significant.” In five of the 19 countries — Czech Republic, Poland, Switzerland, Spain and France — actively religious people “are more likely than the unaffiliated to be obese.”

In a survey of 35 countries, the United States finished 11th in the percentage of people who said they were religiously active, at 40 percent. Majorities were reported in South Africa, the top finisher, and in Poland, Brazil, Peru, Ecuador, Colombia and Mexico; other nations with higher percentages of religiously active people were Slovakia and Singapore.

“We can’t exactly say which countries are the happiest. We only show in the report the estimates by those groups,” Marshall told Catholic News Service, adding that some of the data in the survey had been obtained from the International Social Survey Program or the World Values Survey.

Focusing solely on the United States, the religiously active reported better results in every category but obesity.

But when reporting being in very good health, not currently smoking, avoiding drinking, exercising several times a week, belonging to at least one nonreligious organization, and always voting in national elections, the U.S. religiously active topped their fellow Americans.

There is a phenomenon in surveys called by some researchers “social desirability,” but which others call — ironically, given the subject of this study — the “halo effect,” in which survey respondents answer questions in ways they that will make the interviewer think better of them.

“It is possible that people over-report things like their happiness or church attendance but that doesn’t make their data less important or less useful,” Marshall said. “We’re still learning something about that person,” he added, though it may be “the kind of person who intends to attend church that often (as reported). We’re learning something about their religious self, even if there is an over-reporting about it.”