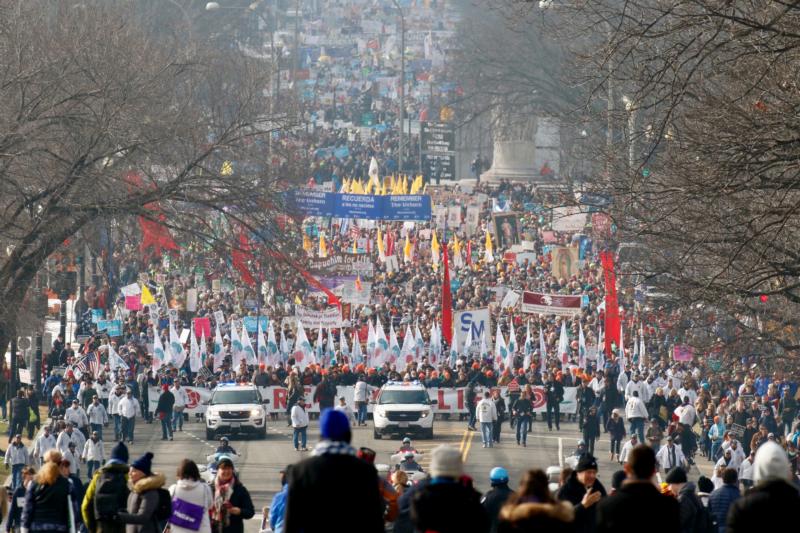 People walk up Constitution Avenue headed toward the U.S. Supreme Court while participating in the 46th March for Life Jan. 18 in Washington. (CNS photo/Gregory A. Shemitz)

WASHINGTON (CNS) — Those who stand up for the dignity of life in all its stages and want to see this respect for all life enshrined once again in U.S. law have a friend in the Pence family and the Trump administration, Vice President Mike Pence told the March for Life crowd on the National Mall Jan. 18.

Pence and second lady Karen Pence were a surprise addition to the roster of speakers at the rally, and after his remarks, the vice president introduced a videotaped message by President Donald Trump, which also was unexpected.

“We’re the Pences and we’re pro-life,” the vice president said to the cheering crowd.

“We gather here because we stand for life and believe as our Founding Fathers did that life born and unborn is endowed with certain unalienable rights, and the first of those is life,” Pence said.

In his message, Trump said the pro-life movement is “founded on love and grounded in the nobility and dignity of every human life. I will always defend the first right in our Declaration of Independence: the right to life.”

Jeanne Mancini, president of March for Life, welcomed the crowd and thanked them for coming once again to march to end abortion, what she called “the greatest human rights abuse of our time.”

She asked the crowd if they will keep marching to fight abortion, to march for the “poorest of the poor” and those who cannot march for themselves until “we no longer need to march” and abortion “is unthinkable.” She received a resounding “yes” to each question.

Looking out from the speakers’ platform, she declared the crowd to be bigger than she has ever seen in her seven years as head of March for Life.

No official crowd counts are available for such events, but ahead of this year’s rally and march, organizers expected more than 100,000 to participate.

“We must keep marching for life every day of the year,” Mancini said, and she asked each marcher to share his or her pro-life story on social media because even of those stories about “why we march” can change others’ minds about abortion. 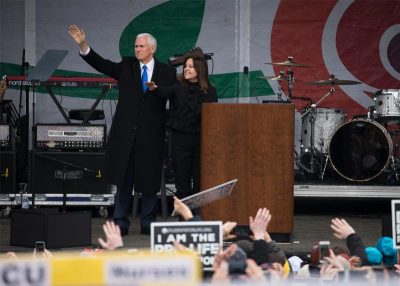 Before she gave her remarks, Mancini introduced Archbishop Joseph F. Naumann of Kansas City, Kansas, chairman of the U.S. bishops’ Committee on Pro-life Activities. He offered the opening prayer for the march and also urged the crowd to go “change the world!”

In a statement issued later in the day to mark the upcoming Jan. 22 anniversary of Roe v. Wade, Archbishop Naumann called on the faithful “to pray for an end to the human rights abuse of abortion, and for a culture of life, where through God’s grace all will come to know they are made in his divine image.”

The theme for this year’s March for Life was “Unique From Day One: Pro-life Is Pro-science,” focusing on how scientific advancements reveal “the humanity of the unborn child from the moment of conception.”

In his remarks, Pence urged the pro-lifers to stand up for God’s creation, spread their message with compassion and hope, and not let their detractors dissuade them.

In 1973 with its Roe decision, he said, the Supreme Court turned “its back on life” but the pro-life movement was born, “motivated by love and truth,” and has been “winning hearts and minds ever since,” he added.

“We know in our heart of hearts, life is winning in America once again,” he said, pointing out the many pregnancy centers helping women across the nation, adoptive families “who open their hearts and homes,” and pro-life leaders who have stepped up to serve in the government.

Shapiro said the Democratic Party has “embraced abortion as a sacrament,” but he also was critical of Republicans in Congress for not stepping up to halt federal funding of Planned Parenthood.

He said the pro-life movement has been deemed to be “out of line with society,” noting that Canadian Prime Minister Justin Trudeau just said that recently. The media “will ignore us,” Shapiro continued, and will pay more attention to “the five who show up tomorrow,” referring to the Women’s March scheduled for Jan. 19 in Washington.

But it’s OK to be “out of line,” Shapiro said, because “righteousness doesn’t have to be popular, just righteous.”

Smith told the crowd that the new Democratic majority in the House “has made it clear that they want to eviscerate all pro-life protections including the Hyde taxpayer abortion funding ban which alone has saved over 2 million people from death by abortion.”

After the rally, the massive crowd began heading up Constitution Avenue to the Supreme Court. Marchers carried signs big and small — and some had huge banners proclaiming respect for life.

It was a multicolored sea of people, old and young, with some sporting bright blue knit hats, others wearing neon yellow hooded sweatshirts. Mixed in were Franciscans and Dominicans and other men and women religious in their habits.

Some predicted the partial government shutdown would alter the plans for the March for Life, or at least keep crowds from coming. Some worried bad weather predicted for parts of the Midwest and the Washington region would impede travelers heading East and reduce the numbers.

But there was no weather event to speak of, and the sun even shined for a time midday. The worst obstacle was a muddy Mall and some mounds of icy snow here and there — the result of a snowstorm early in the week, and as Mancini told the crowd, pro-lifers come whether it is raining, sleeting or blizzarding.

As the March for Life rally was about to get underway, Caitlyn Dixson of Des Moines, Iowa, stood not too far from the main stage. It was her first March for Life.

She told Catholic News Service how five years ago she came close to getting an abortion but changed her mind while she was at a Planned Parenthood clinic.

Today her baby, Caden, is 4 years old and Dixson recently became executive director of Iowa Right to Life, so, she noted, it was time for her to make the march.

“Now I spend every day of my life to help young girls like me to make it possible for them to save their babies like I did mine,” she said.

PREVIOUS: Youth at Mass for Life thanked for offering sign of hope for the future

NEXT: Crowd comes to march for different reasons but same message: Defend life