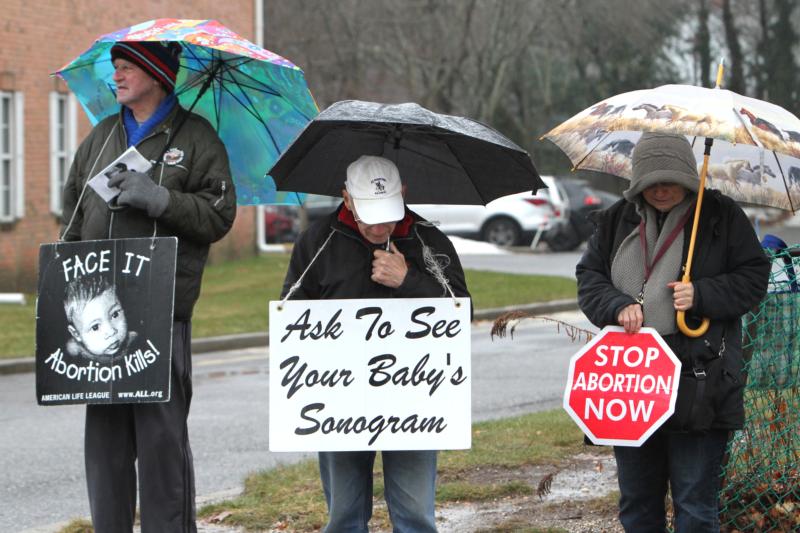 Pro-life advocates gather in silent witness near the entrance of a Planned Parenthood center in 2018 in Smithtown, N.Y. A proposed abortion law for New York state that would allow more health practitioners to provide abortion and remove all state restrictions on late-term abortions “is not progress” as lawmakers argue, said New York’s Catholic bishops. (CNS photo/Gregory A. Shemitz)

“The so-called ‘Reproductive Health Act’ will expand our state’s already radically permissive law,” they said in a statement released Jan. 17. “With an abortion rate that is already double the national average, New York law is moving in the wrong direction.”

They said “words are insufficient to describe the profound sadness we feel at the contemplated passage” of the measure. “We mourn the unborn infants who will lose their lives, and the many mothers and fathers who will suffer remorse and heartbreak as a result,” they said.

“We renew our pledge to offer the resources and services of our charitable agencies and health services to any woman experiencing an unplanned pregnancy, to support her in bearing her infant, raising her family or placing her child for adoption,” the bishops said. “There are life-affirming choices available, and we aim to make them more widely known and accessible.”

New York Gov. Andrew Cuomo, who is Catholic, and legislative leaders “hail this new abortion law as progress. This is not progress,” the bishops said. “Progress will be achieved when our laws and our culture once again value and respect each unrepeatable gift of human life, from the first moment of creation to natural death. Would that not make us truly the most enlightened and progressive state in the nation?”

Introduced in the Legislature the week of Jan. 7, the Reproductive Health Act, or RHA, is known as S. 240 in the state Senate and A. 21 in the state Assembly. It is expected to pass within the first 30 days of the legislative session, as promised by Cuomo.

Dennis Poust, director of communications for the New York State Catholic Conference, said the numbers needed to prevent the bill from passing “just aren’t there.”

“The Assembly is overwhelmingly Democrat, and the governor is the one who has been proposing it. (Senate Democrats) ran on this and were swept into office, so they’re not going to not pass it,” he told The Evangelist, Albany’s diocesan newspaper, in a recent interview.

The bill refers to abortion as a “fundamental human right,” which is cause for concern, said Kathleen Gallagher, director of pro-life activities and the Catholic Action Network for the conference. She argues that because of the bill’s strong language, the measure could be used to block religious organizations from advocating for life, or prevent doctors from abstaining from performing abortions on religious or moral grounds.

“It foresees a time in New York where it’s a crime to be pro-life,” she told The Evangelist.

Renee Morgiewicz, coordinator of Respect Life Ministry and parish services and for the Albany Diocese, echoed that concern.

“‘A fundamental right’ is a right that could supersede everything, even the right of conscience and religious freedom,” she said.
The Reproductive Health Act also would repeal both the current state requirement that only a licensed physician can perform an abortion and the current law that states third-trimester abortions can only be performed in cases where the mother’s life is in danger.

Physicians and other health care practitioners in neighboring states that still hold strict laws on late-term abortions, such as Pennsylvania, could see this bill as “a green light” to come to the state for work, added Gallagher.

PREVIOUS: Naumann: ‘Let’s pray we can be effective witnesses’ for life, love, mercy

NEXT: Rev. King called ‘artisan of peace’ and ‘true witness to power of Gospel’