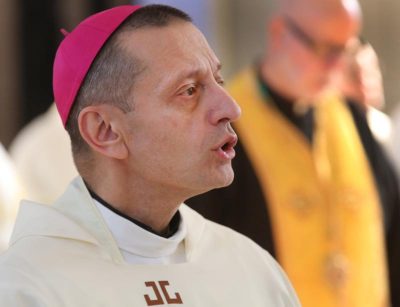 Bishop Frank J. Caggiano of Bridgeport, Conn., sings during Mass in the Chapel of the Immaculate Conception at Mundelein Seminary Jan. 3 at the University of St. Mary of the Lake in Illinois, near Chicago. (CNS photo/Bob Roller)

BRIDGEPORT, Conn. (CNS) — Police are investigating vandalism at St. Augustine Cathedral in Bridgeport where someone painted a swastika on the cathedral doors.

Bishop Frank J. Caggiano of Bridgeport, who has been on a seven-day retreat with the rest of the U.S. bishops in Mundelein, Illinois, said he only learned of the incident the afternoon of Jan. 5.

In a statement issued later that day, Bishop Caggiano said: “I am appalled and outraged by this act of vandalism against the mother church of our diocese and this brazen and disgusting display of anti-Semitism, which is morally abhorrent and an affront to our Catholic faith.”

He added, “I am deeply disturbed and outraged that someone would violate the sanctity of our church.”

Bishop Caggiano also reached out to Jews in the Bridgeport area. “My thoughts and prayers are with our Jewish brothers and sisters in the city of Bridgeport and beyond,” he said. “We stand with you and condemn every form of anti-Semitism, racism, and bigotry wherever it may be found.”

The bishop added, “To use a clearly anti-Semitic symbol is participating in unspeakable evil. I know I speak for everyone at the cathedral parish and the diocese as we condemn the act, we condemn what it signifies, and we hope the perpetrator will be found.”

He said it was “deeply distressing to see such a display of hatred at a time when we need to strengthen our efforts to come together as a community in mutual respect and support,” adding, “I am deeply disturbed and outraged that someone would violate the sanctity of our church.”

The Connecticut Post reported that anti-Semitic acts and symbols have appeared in Connecticut in recent years.

In November, students at Amity Regional High School in Woodbridge reported they felt unsafe because of hate speech and anti-Semitic symbols appearing there. In 2017, the headmaster of Greenwich Country Day School found two swastikas in a hallway and in a school lounge. In 2014, two 14-year-olds were arrested for allegedly painting swastikas on a vacant home, a tree and several public signs in Putnam, in the northeastern part of the state. Schools in Stratford, Danbury, Greenwich, Ridgefield and Wilton have also seen drawings of swastikas over the years.