Priest apologizes for funeral homily that focused on suicide 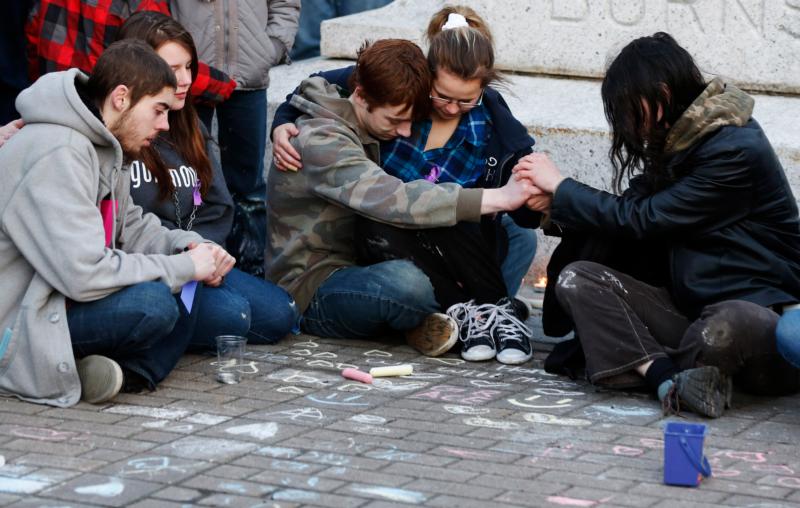 Teens comfort each other during a vigil for a friend who committed suicide. A Michigan priest, criticized for emphasizing suicide during a recent homily at a teenager’s funeral, has apologized and said he “fell well short” of providing the family with the comfort they desperately needed. (CNS photo/Paul Darrow, Reuters)

WASHINGTON (CNS) — A Michigan priest criticized for emphasizing suicide in his homily during a recent funeral for an 18-year-old who took his own life has since apologized.

“As with any funeral, it was my intent to serve this family in their time of grief, but I fell well short of providing them the comfort they so desperately needed. Instead, I added to their pain. I deeply regret that, and I am sorry,” said Father Don LaCuesta, pastor of Our Lady of Mount Carmel Church in Temperance, Michigan.

He expressed his remorse in remarks to parishioners a week after the Dec. 8 funeral of Maison Hullibarger, which received extensive media coverage. His remarks were released Dec. 17 by the Detroit Archdiocese along with its own statement of apology.

The archdiocese said it regrets that one of its parish priests “was unable to bring comfort to a grieving family at the recent funeral of their beloved son. Our hope is always to bring comfort to situations of great pain, through funeral services centered on the love and healing power of Christ.”

The statement added that what happened made an unbearable situation “even more difficult” and noted that Father LaCuesta will no longer be preaching at funerals and will have all other homilies reviewed by a priest mentor.

In his homily at the Dec. 8 funeral, also released by the archdiocese with names redacted, Father LaCuesta did not say, as some media reports have indicated, that the teen’s Dec. 4 death would prevent him from going to heaven.

His homily focused on suicide and God’s mercy without mentioning any details about Hullibarger, a freshman at the University of Toledo, Ohio, who was studying criminal justice, who was a brother to five siblings and who loved football, camping and his mom’s cooking.

His parents told the Detroit Free Press that they met with the priest days before the funeral to tell him about their son, stressing that they wanted him to talk about his life.

“We wanted him to celebrate how Maison lived, not how he died,” said his mother, Linda Hullibarger.

The priest began by saying there was “hope in eternity even for those who take their own lives.”

He went on to say that “taking your own life is against God who made us and against everyone who loves us. Our lives are not our own. They are not ours to do with as we please. God gave us life, and we are to be good stewards of that gift for as long as God permits.”

The priest also said the “finality of suicide makes this all the worse. You cannot make things right again,” adding that the pain for the family now is that so much is unresolved when they would like to “turn the clock back and say, ‘Please don’t give up. We can work through this pain together.'”

He said the family now will have to work through this pain by themselves or “with those close to you now who will need to lean on you even as you lean on them.”

He ended by repeating what he said earlier in the homily: “Nothing — not even suicide — can separate us from the unconditional love of God.” But by that point Maison’s father, Jeff Hullibarger, frustrated with the repeated message of suicide, had already gone to the pulpit asking the priest to stop.

Jeff and Linda Hullibarger said they spoke to the media about what happened so that something similar wouldn’t happen to other families. They also have asked the archdiocese to remove Father LaCuesta as their parish pastor.

The Hullibargers received phone calls from the archdiocesan vicar for clergy and an auxiliary bishop as well as Detroit Archbishop Allen H. Vigneron, who also planned to meet with the couple in person.

In the priest’s message to his parish, he said: “I know there have been some calling for my removal from the parish — or from ministry altogether. I understand the pain behind these calls. It is my preference to stay and to serve the parish community I love so much. I want all of you to know that I am working with the archdiocese to ensure that I can serve more effectively in the future.”

He also said he will work on “deep interior reflection” alone and with others about how he could have “missed the mark so completely in this case.”

“Many of us know how painful it is when you unintentionally hurt somebody you are trying to help,” he added. “I ask you to please join me in praying for the family involved, that they may find healing and comfort during this difficult time.”

Although some Christian denominations maintain that suicide results in automatic and eternal damnation, the Catholic faith does not despair of God’s mercy for those who take their own lives and it recognizes the complexities of mental, emotional and physical health in its stance on suicide.

“The Catholic Church doesn’t ever decide or declare that someone is in hell,” he added. “What’s important here is hope — hope in the love of God, and in his divine mercy.”

The Detroit archdiocesan statement said it acknowledged that the Hullibarger family “expected a homily based on how their loved one lived, not one addressing how he passed away.”

It also said the family was hurt by the priest’s “choice to share church teaching on suicide, when the emphasis should have been placed more on God’s closeness to those who mourn.”