Without a voice at home, Nicaraguans ask Washington-based OAS for help 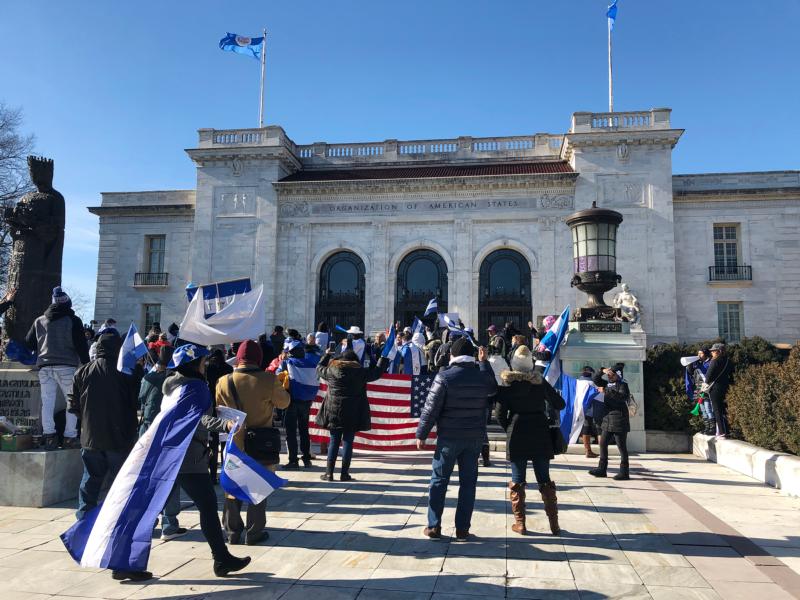 Demonstrators gather outside the Organization of American States building in Washington Jan. 11, as diplomats and an array of officials from the three American continents weighed whether to take diplomatic action against the Central American country of Nicaragua. The country descended into turmoil in April 2018 and Catholic bishops in Nicaragua have attempted to engage the government in dialogue to broker peace. (CNS photo/Rhina Guidos)

WASHINGTON (CNS) — For a few hours, Gio Gomez left the warmth of the Florida sun and headed north toward an arctic blast in Washington. She protected herself from the winter breeze while wrapped in a yellow and white Vatican flag outside the building of the Organization of American States, the place where diplomats and an array of officials from the three American continents Jan. 11 were weighing “the situation in Nicaragua.”

She made the trek from her home in the Miami-Dade area to Washington, she told Catholic News Service, to show support for the Catholic clergy in the Central American nation of Nicaragua.

Her native country has, for almost a year, been undergoing a crisis involving a government accused by detractors, like Gomez, of killing and injuring its citizens, violating their human rights (as well as their right to free and fair elections), threatening independent media and usurping power.

In the middle of it all, the Catholic Church in Nicaragua, from its bishops to the laity, has been in the thick of the drama. The country’s bishops attempted to dialogue with the government after massive protests and unrest erupted in April 2018 when Ortega administration officials announced a plan to reduce pensions as a cost-cutting measure while increasing employee contributions to the social security system.

Though the government rescinded the proposal, the violent reactions toward it yielded hundreds of deaths and thousands of injuries after police and pro-government forces clashed with dissenting civilians.

The country, which had showed modest but stable economic growth, also plummeted financially, resulting in even more public demonstrations of discontent. Those demonstrations migrated beyond the borders of Nicaragua. They regularly occupy space on Twitter via the hashtag #SOSNicaragua and expanded abroad in places like Washington and Florida, where Nicaraguan expats who feel they cannot be heard at home, are urging multilateral organizations such as the OAS to act against the government of President Daniel Ortega and his wife, Vice President Rosario Murillo, whom they largely blame for the crisis.

“Gentlemen, ladies, don’t be indifferent, they’re killing people,” Gomez shouted in Spanish. She was with about 200 other Nicaraguan immigrants outside the OAS building in Washington, as the regional forum met to weigh what action, if any, to take.

Luis Almagro, secretary-general of the Washington-based OAS, an organization of 35 independent states from North, Central and South America, called for the urgent session in January to address the allegations against Nicaragua, an OAS member state.

During that meeting, Paulo Abrao, executive secretary for the Inter-American Commission on Human Rights (CIDH for its Spanish acronym), said the organization had determined that 325 Nicaraguans had died and at least 2,000 had been injured since anti-government demonstrations began in April 2018.

At least one of those deaths included the killing of a student from a Jesuit high school in the Nicaraguan capital of Managua. Alvaro Conrado Davila, 15, a student at the Loyola Institute, died April 20, 2018, after being hit in the throat by a rubber bullet.

But Nicaragua Foreign Minister Denis Ronaldo Moncada Colindres disputed the accusations against his government. In a scene reminiscent of the Cold War, he accused the OAS secretary-general during the meeting of being a pawn of the U.S., reminded representatives of member states gathered in the room of “Yankee troops” marching into other Latin American countries and of past interventionism in the region, and said if illegal action was taken against Nicaragua, they could be next.

“The government of Nicaragua rejects and condemns this convocation,” he said, accusing Almagro of supporting terrorist groups that advocate overthrowing legitimate governments such as the one run by Ortega and Murillo.

But even the legitimacy of the Nicaraguan government is in question. The Ortega administration, which has ruled the country for more than a decade, has been accused of using the country’s judicial system to quash any significant political opposition groups. The administration exerts control over all branches of government.

Moncada Colindres classified those opposing Ortega as terrorists or as paid actors of the “ultra-right” of the United States, posing as pacifist workers for nongovernmental organizations, he said, but intent on attempting a coup. He used the example of a priest in Nicaragua threatening violence against local police. Media reports said the priest was trying to calm the situation by marching through the streets with the Eucharist.

Though the relationship between the government and a church on the side of the Nicaraguan people seems tense at best, it wasn’t always so.

In a Jan. 3 telephone interview with CNS from Managua, Catholic journalist Israel Gonzalez Espinoza explained that in the past Catholic authorities had worked with the Ortega government, including in an effort that resulted in 2006 with getting a national law approved that banned abortion. The relationship between the church hierarchy and government was “cordial,” Gonzalez said, and differences were discussed privately.

In 2014, the country’s bishops met with Ortega and presented him with a document, an “X-ray,” of the country’s problems, Gonzalez said, including the need to guarantee free and fair elections in 2016. They also pointed out in the document the need to stop “political manipulation of religious symbols for political interest” and the “appropriation of terminology and values of the Catholic religion” incorporated into partisan slogans.

“They never received a response” from the administration, said Gonzalez, who covers the Catholic Church for the Spanish-language online site Religion Digital.

By the time the Nicaraguan bishops met with the Ortega administration last year to try broker peace and open a dialogue following the protests, government officials had dug in their heels.

“They just wanted to talk about the economic situation, that was their ‘war horse,’ saying that at the international level, Nicaragua was an economically stable country” and the government shouldn’t be questioned, Gonzalez said.

But since then, the economy contracted. The Inter Press Service news agency reported in September that “more than $900 million have fled the financial system” in Nicaragua since the conflict started. The economic instability seemed to fuel public shows of discontent.

Catholic churches have served as places of refuge during some of the clashes, especially since young Nicaraguans, many of them Catholic, have been involved in some of the demonstrations.

Prelates such as Managua Auxiliary Bishop Silvio Baez have come under fire and even physical attack by pro-government groups for speaking out against the Ortega administration. That’s what prompted Nicaraguans abroad, such as Gio Gomez, to seek help abroad, not just for other Nicaraguans, but also the Catholic Church as an institution in Nicaragua.

“Their rights are under attack,” said Gomez, waving a blue and white Nicaraguan flag as OAS members left the building. Though no action was taken against the Ortega administration Jan. 11, the OAS is considering various upcoming diplomatic options.

Though OAS representatives from Venezuela and Bolivia backed Nicaragua, many seemed to side with Secretary-General Almagro, who offered strong rebuke during the meeting saying that the “grave” situation in Nicaragua prompted a deeper look at the country because democracy cannot exist amid repression and violation of human rights.

When a government openly violates basic human rights, he said, “it’s obvious that it has forgotten that sovereignty is rooted in the people.”

Referencing the OAS meeting, Nicaragua’s Cardinal Leopoldo Brenes said to online news site Confidencial in early January that “if an observation has merit, I think it has to be evaluated well, and those things that need to be changed, well, they need to change, for benefit of the country.”

NEXT: No place for ‘religious test’ in government, says Senate in unanimous vote