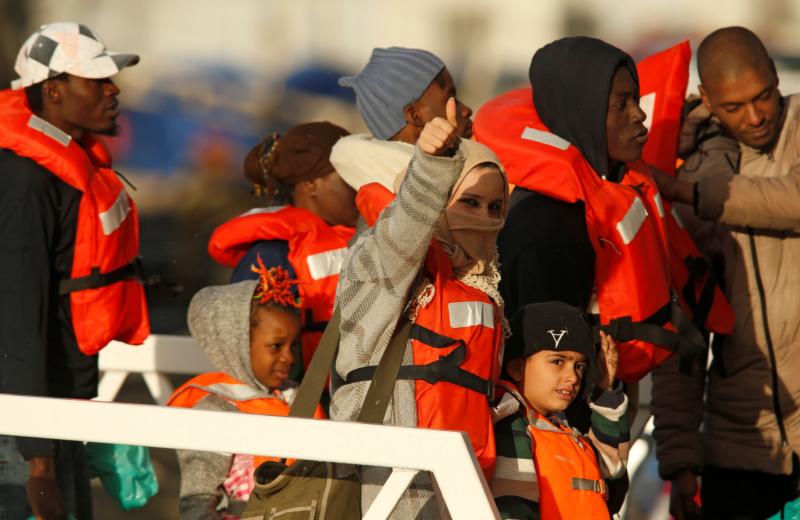 Migrants who were stranded on the nongovernmental organization migrant rescue ships Sea-Watch 3 and Professor Albrecht Penck disembark Jan. 9 from an Armed Forces of Malta patrol boat at its base in Valletta. Pope Francis issued a plea Jan. 6 to European governments to work together to find a way to assist the migrants. (CNS photo/Darrin Zammit Lupi, Reuters)

ROME (CNS) — Migrants rescued from the Mediterranean were taken to shore in Malta Jan. 9 after being kept at sea while European nations argued over who was responsible for them.

Pope Francis had issued a public plea Jan. 6 for European governments to demonstrate “concrete solidarity” with the 32 migrants rescued Dec. 22 and 17 others rescued Dec. 29.

The 49 people, including several children, were rescued by boats operated by the Germany-based Sea-Watch humanitarian organization.

Joseph Muscat, prime minister of Malta, announcing that the migrants would be transferred to Maltese military boats and brought ashore, said Jan. 9, “Malta, the smallest European Union state, is once again being called upon to shoulder responsibilities way beyond its remit.”

The rescues performed by the boats Sea-Watch 3 and Albrecht Penck “took place outside Malta’s area of responsibility,” he said. “We were not the responsible authority, and we were not the nearest safe port of call.”

Italy refused to allow the boats to dock or to transfer the migrants to an Italian military ship, and the humanitarian organization refused to hand the migrants over to the coast guard of Libya, where they had boarded boats hoping to reach Europe.

Muscat said Malta should not have to provide for the 49 migrants when, in the past few weeks, it had “unilaterally rescued a further 249 persons at sea whose lives were clearly in danger.”

An agreement, he said, had been reached with eight other European countries to relocate the 49 migrants rescued by Sea-Watch and 131 of those rescued by Malta.

However, while Italian Prime Minister Giuseppe Conte said Italy would accept some of the migrants, Matteo Salvini, the country’s deputy minister and minister of the interior, insisted that would not happen.

“I am and remain absolutely opposed to new arrivals in Italy,” Salvini tweeted. “I will continue to work to expel the already too numerous illegals already present.”

Speaking at a news conference in Warsaw, Poland, Salvini said he would clarify the agreement with Conte. But “whether it’s eight or 88 migrants, I will not authorize any of them to enter Italy.”

PREVIOUS: Be a devotee of Black Nazarene, not a fanatic, says Cardinal Tagle

NEXT: Vatican leaps into the world of sports