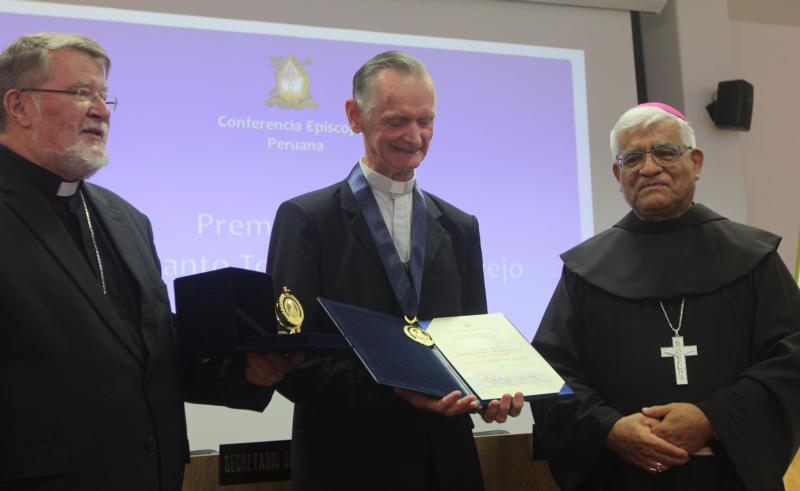 Bishop Daniel Turley of Chulucanas, Peru, a Chicago native, center, receives the St. Toribio of Mogrovejo Medal Jan. 17 from the Peruvian bishops’ conference to mark the 50th anniversary of his ordination to the priesthood. (CNS photo/Barbara Fraser)

LIMA, Peru (CNS) — In the mountainous Diocese of Chulucanas, on the border with Ecuador, accompanying people in hard times can be dangerous. But Chicago-born Bishop Daniel Turley has been doing that for nearly five decades, since his arrival as an Augustinian priest shortly after his ordination.

Missionaries are called “to walk along with the people with the Lord, in all their struggles, in all their happiness,” said the tall, lanky, soft-spoken bishop.

Bishop Turley received the St. Toribio de Mogrovejo Medal Jan. 17 from the Peruvian bishops’ conference. The award, named for the 16th-century Spanish missionary who was the second archbishop of Lima, celebrated the 50th anniversary of Bishop Turley’s ordination to the priesthood.

Bishop Turley, who arrived in Peru shortly after his ordination in 1969, told Catholic News Service that the past five decades have been a time of constant learning. The first lesson came immediately upon arrival.

“You were taught in the seminary that you’ve got to be a missionary to bring Christ to the people,” Bishop Turley said. “Then you get here, and you find that Christ’s already here, he’s already with the people. You learn the beauty of the people. That’s the most important thing of all.”

Bishop Turley arrived in Peru as a young priest just after the Second Vatican Council and shortly before the Second Conference of Latin American Bishops in Medellin, Colombia, in 1968, where church leaders called for a preferential option for the poor.

In Chulucanas, that meant forming laypeople to play a more active role in the church, he said.

“A very important part of missionary work is to empower the people,” he said. “One of the most beautiful things (is) when you get the laity empowered, and the laity begin to exercise that power, especially outside of the church, in society.”

Like other parts of Peru, Chulucanas suffers from corruption, domestic and crime-related violence, and drug trafficking, and it is important for laypeople to infuse politics, education and other areas of public life with Christian values, he said.

In the mountainous Diocese of Chulucanas, on the border with Ecuador, accompanying people in hard times can be dangerous. That was especially true in the 1980s and early 1990s, when Peru was gripped by terrorist violence.

As a priest, Bishop Turley worked in Pacaipampa, a farming village accessible only on foot or by horse or mule.

It was impossible to hold meetings or classes in the evenings, when people had finished work, he said, because they shut themselves in their homes by 6 p.m. out of fear of terrorists. The diocese was also the scene of one of the largest massacres of police by terrorists, when 17 officers and a civilian were killed in an ambush in 1993 in the district of Huarmaca.

During those years, ordinary people were caught in the crossfire between terrorists, who especially targeted community leaders and local government officials, and security forces, who would detain anyone they suspected of collaborating with subversives.

To avoid being targeted by either side, men would often sleep in the fields or in the hills at night, Bishop Turley said.

People who were arrested were sometimes offered freedom in exchange for identifying others. During those years, church workers labored to free many innocent people who were accused unjustly, the bishop said.

The political violence died down in the 1990s, after the leaders of the country’s two main terrorist groups were captured, but its legacy lives on in distrust between neighbors, he said. And terrorist violence has been replaced by violence related to illegal gold mining and drug trafficking in the northern Piura region, where Chulucanas is located.

“You’re walking with people who are very wonderful people, but they have a lot of suffering in their lives, too,” Bishop Turley said.

The prelate has supported the right of people to speak out against actions that affect their lives. That position put him at odds with politicians and mining company executives more than a decade ago, when highland communities opposed plans for an open-pit mine.

The project was postponed after a conflict that included the abduction and torture of more than two dozen local people by security forces in 2005, but government officials have said work on the mine could resume within the next few years.

Bishop Turley’s “generosity, and the patience he has to listen to anyone who seeks him out” have made him beloved by the people of the diocese, Bishop Robert Prevost of the coastal city of Chiclayo told CNS.

Bishop Prevost, a Chicago native and former prior general of the Augustinians, worked in Chulucanas in the mid-1980s as a young priest, when then-Father Turley was the local Augustinian superior.

“We used to joke among ourselves that if you wanted to travel somewhere, if you were traveling with Father Turley you’d have to have a lot of time on your hands, because he never went directly from one place to the other,” Bishop Prevost recalled. “Whether he was driving or going on a horse, he would stop to greet everyone, and people would come out to greet him.”

When Pope Francis visited Peru in January 2018, Catholics from throughout northern Peru traveled to Trujillo carrying sacred images from their communities to be blessed at an open-air Mass in the beach community of Huanchaco.

Bishop Turley made the journey with pilgrims from his diocese who carried the Captive Christ, an 18th-century image of Jesus as a prisoner before his crucifixion, which draws thousands of pilgrims to the town of Ayabaca every October.

Arriving in Trujillo the day before the open-air Mass celebrated by Pope Francis, instead of seeking comfortable lodging, Bishop Turley spent the night on the beach with the other pilgrims, Bishop Prevost said.

NEXT: Pope says it’s ‘grave sin’ to deny God has blessed other Christians