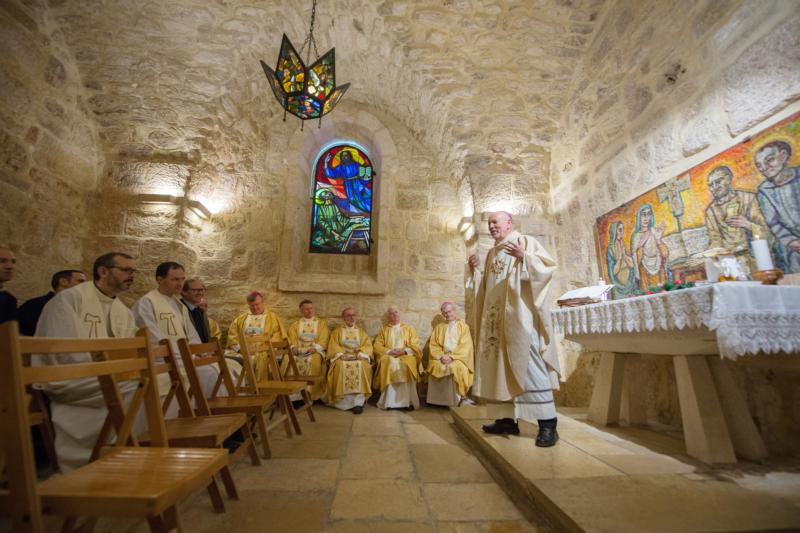 Bishop William Nolan of Galloway, Scotland, delivers the homily during Mass in St. Jerome’s Cave in the Church of the Nativity in Bethlehem, West Bank. The Mass was part of this year’s Jan. 12-17 Holy Land Coordination, which focused on the challenges and opportunities for Christians in Israel. (CNS photo/courtesy Marcin Mazur via catholicnews.org.uk)

JERUSALEM (CNS) — Bishops from North America, Europe and South Africa who joined this year’s Holy Land Coordination reiterated their solidarity with all of Israel’s Christians and called for their equal inclusion in Israeli society.

“Throughout our visit, we have experienced how there are Israeli citizens from many different backgrounds who coexist and work together for the common good of their society. We recognize that Israel was founded on the stated principles of equality between all its citizens. This urgently needs to become the lived reality,” they said in the final statement, issued Jan. 18. “We stand with Israel’s Christians and all those challenging discrimination, in support of their call to protect the country’s pluralism.”

The nation-state law, which was passed as one of Israel’s Basic Laws by the Israeli Knesset last July, holds Israel as “the national home of the Jewish people” and states that “the right to exercise national self-determination in the state of Israel is unique to the Jewish people.” In addition, it downgrades Arabic from Israel’s second official language to one with a “special” status. Though the law will have little short-term effect, opponents are concerned about its long-term impact, which will depend on the character of future Israeli governments and how they choose to implement the law within government policy. Though Israel has already historically defined itself as the Jewish homeland, opponents say by enshrining it into a Basic Law, they have been effectively relegated to second-class citizens.

Taking place this year in the northern Israeli city of Haifa Jan. 12-17, the coordination focused on the challenges and opportunities for Christians in Israel. The bishops visited Christian hospitals, schools and villages in Israel. They also met with Christian religious leaders, Christian mayors from Israeli towns, members of the Israeli Knesset, academics and people displaced from the Melkite Catholic village of Ikrit.

In their statement, the bishops also noted the deepening humanitarian crisis facing Palestinians in the West Bank due to cuts in humanitarian funding by the U.S. administration.

“Health care, education and other basic services for refugees are being increasingly threatened, exacerbating the ongoing violations of their fundamental human dignity. This cannot be ignored or tolerated,” they said in the statement. “We call upon our own governments to help meet the funding gaps now faced by the U.N. Relief and Works Agency and redouble their efforts toward a diplomatic solution, with two democratic sovereign states of Israel and Palestine existing in peace.”

They expressed their admiration of the Christians of the Holy Land for not giving up hope and committed themselves to keeping the hope alive “through prayer, pilgrimage and practical solidarity.”

NEXT: A ‘manifesto’ at World Youth Day calls attention to environment