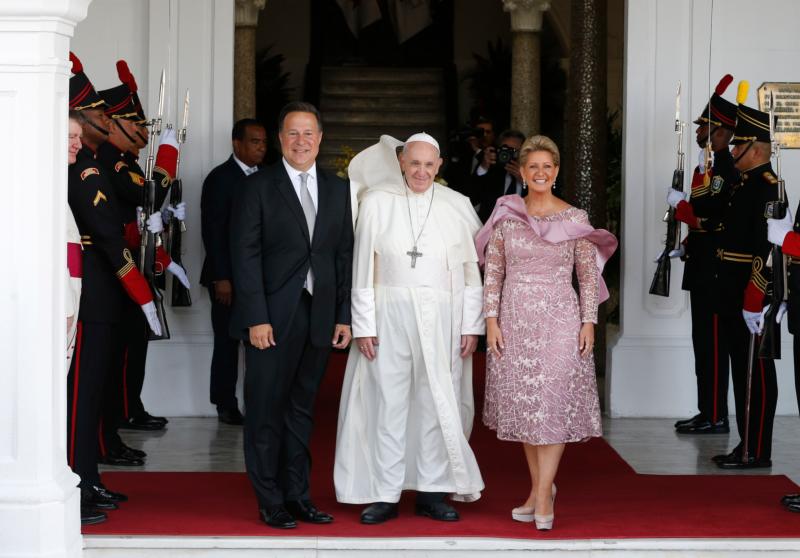 PANAMA CITY, Panama (CNS) — Panama’s geographical position as a bridge between land and ocean is symbolic of its ability to broker peace and hope in an area marked by violence and conflict, Pope Francis said.

In his first official speech in the Central American country Jan. 24, the pope said Panama’s privileged location makes it “a strategic enclave not only for the region but also for the entire world.”

“A bridge between oceans and a natural land of encounter, Panama, the narrowest country of the entire American continent, is the symbol of the sustainability born of the ability to create bonds and alliances,” he said at meeting with the country’s government authorities and diplomats at Bolivar Palace. “This capacity shapes the heart of the Panamanian people.”

The pope began his first day in Panama with a visit to the presidential palace, Palacia de las Garzas. After greeting hundreds of pilgrims gathered outside from the palace balcony, the pope went inside for a private meeting with Panamanian President Juan Carlos Varela.

Anticipation grew as hundreds of members of the Panamanian government and diplomatic corps gathered in the indoor courtyard of the palace.

Arriving at the presidential palace to greet the pope was an ecumenical delegation from the country. Argentine Rabbi Gustavo Kraselnik, who has lived in Panama for the past 16 years, told journalists the Central American country was and continues to be “an example of interreligious dialogue” for the world.

“So many religions coexist without conflict (in Panama). What is normal here is extraordinary in other parts of the world,” Rabbi Kraselnik said.

Among those waiting for the pope at the gathering was Father Claudio Caruso, a priest from the Archdiocese of Buenos Aires, Argentina, who was ordained by then-Cardinal Jorge Mario Bergoglio.

Wide-eyed and cheerful, Father Caruso carried a thermos of hot water and a traditional calabash gourd filled with mate tea, hoping that the pope would not be able resist a sip of the Argentine specialty.

“I don’t know if the pope will want some (mate tea). If the pope wants it, he can have it,” Father Caruso said.

Above the balcony of the immense courtyard were nearly a hundred elementary school children from a nearby province, who were invited to sing at the gathering. Making his way to the courtyard, the pope was greeted with applause as the children sang a Spanish version of Friedrich Schiller’s “Ode to Joy.”

In his address, the pope said Panama has a distinct vocation as “a land of convocation and encounter,” notable for “the richness of its indigenous people.”

“To be a land of convocation means celebrating, acknowledging and listening to what is specific about each of these peoples and of all those men and women who make up the face of Panama and work to build a future of hope,” the pope said.

The pope called on government leaders to set an example to young people in Panama by showing that public service synonymous with “honesty and justice and opposed to all forms of corruption.”

By opening their doors to thousands of young people for World Youth Day, he added, Panama will “turn into a hub of hope,” where young men and women can rekindle “their desire and commitment to building a more humane world.”

“Another world is possible,” Pope Francis said. “We know this, and young people urge us to take our part in building it, so that our dreams do not remain ephemeral or ethereal, but can promote a social contract in which everyone has the chance to dream of a tomorrow. The right to the future is also a human right.”