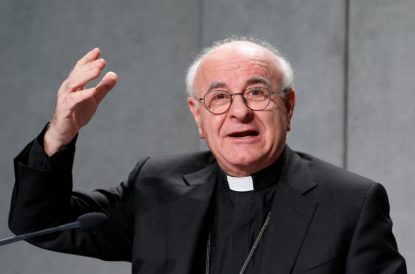 A sense of fraternity between people and nations has been weakened with an erosion of mutual trust and “remains the unkept promise of modernity,” Pope Francis said.

“The strengthening of fraternity, generated in the human family by the worship of God in spirit and truth, is the new frontier of Christianity,” the pope said in a letter addressed to Archbishop Vincenzo Paglia, president of the pontifical academy.

Speaking to reporters at a Vatican news conference Jan. 15, Archbishop Paglia said the letter’s title, “The Human Community,” indicated how the pope wants pro-life concerns to include a concern for human relationships — in the family, in society, among nations as well as with creation.

“Life is not an abstract universal concept, it is the human person,” and the way human beings live embedded in a specific context interwoven with others, he said.

Christians must rebuild and strengthen human bonds and relationships, the archbishop said, because “the weakening of fraternity, whether we like it or not, contaminates all the human and life sciences.”

The pope sent the letter to mark the 25th anniversary of the academy’s establishment by St. John Paul II on Feb. 11, 1994.

St. John Paul, the pope said, recognized the “rapid and sweeping changes taking place in biomedicine” and saw the need for greater research, education and communication aimed at demonstrating “that science and technology, at the service of the human person and his fundamental rights, contribute to the overall good of man and to the fulfilment of the divine plan of salvation.”

Pope Francis said the academy’s new statutes, issued in 2016, were meant to encourage its activities, expand its fields to include the rapid and complex discoveries and changes unfolding in science, medicine and technology, and recognize the social and relational effects of these new developments.

Today, the pope wrote, the human dimension is being lost.

“Mutual distrust between individuals and peoples is being fed by an inordinate pursuit of self-interest and intense competition that can even turn violent. The gap between concern with one’s own well-being and the prosperity of the larger human family seems to be stretching to the point of complete division,” he wrote.

People’s estranged or strained relationship with others and with the earth is “the result of the scarce attention paid to the decisive global issue of the unity of the human family and its future,” the pope said. It reflects the existence of an actual “anti-culture,” which is not only indifferent to the community, it is “hostile to men and women and in league with the arrogance of wealth.”

People’s awareness of this paradox often leaves them “demoralized and disoriented, bereft of vision,” he said, and in even greater need of the hope and joy offered by Christ and of a taste for the beauty of a life lived in fraternity with others on the earth as a common home.

“It is time for a new vision aimed at promoting a humanism of fraternity and solidarity between individuals and peoples,” Pope Francis wrote. “We know that the faith and love needed for this covenant draw their power from the mystery of history’s redemption in Jesus Christ.”

But, he wrote, Christians must reflect whether they have been “seriously focused on the passion and joy of proclaiming God’s love for the dwelling of his children on the earth? Or are they still overly focused on their own problems and on making timid accommodations to an essentially worldly outlook?”

“We can question seriously whether we have done enough as Christians to offer our specific contribution to a vision of humanity capable of upholding the unity of the family of peoples in today’s political and cultural conditions,” he said.

Perhaps, he said, “we have lost sight of its centrality, putting our ambition for spiritual hegemony over the governance of the secular city, concentrated as it is upon itself and its wealth, ahead of a concern for local communities inspired by the Gospel spirit of hospitality toward the poor and the hopeless.”

The Pontifical Academy for Life has an important role to play in facing this difficult challenge, the pope said. Its scientific community has shown for the past 25 years how it can enter into dialogue with the world and “offer its own competent and respected contribution.”

“A sign of this is its constant effort to promote and protect human life at every stage of its development, its condemnation of abortion and euthanasia as extremely grave evils that contradict the spirit of life and plunge us into the anti-culture of death,” the pope wrote.

“These efforts must certainly continue, with an eye to emerging issues and challenges that can serve as an opportunity for us to grow in the faith, to understand it more deeply and to communicate it more effectively to the people of our time,” he said.

Pope Francis expressed his hope that the academy would be “a place for courageous dialogue in the service of the common good,” a dialogue unafraid of advancing “arguments and formulations that can serve as a basis for intercultural and interreligious, as well as interdisciplinary, exchanges” along with discussions about human rights and duties, “beginning with solidarity with those in greatest need.”

The pope’s letter, “Humana Communitas” can be found in English here.

NEXT: Philippine president open to talks despite ‘murderous words’