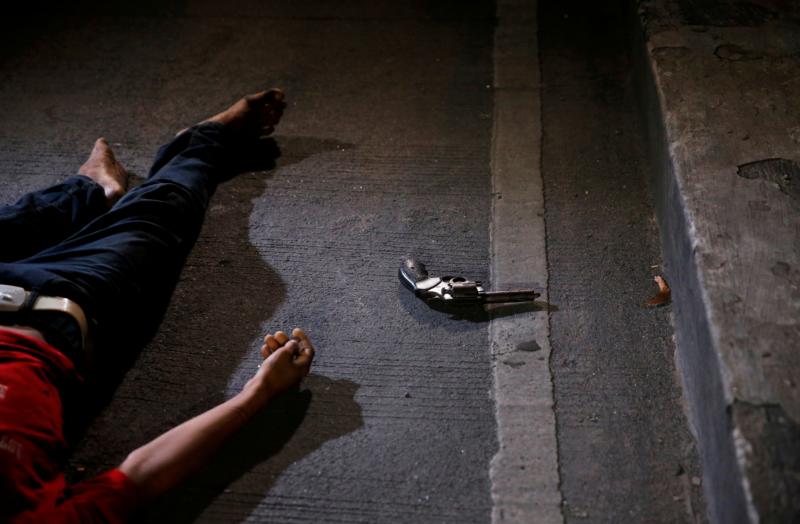 A revolver is seen near the body of a man killed by police after drugs were found in his pockets in Manila, Philippines, Aug. 17, 2017. Catholic bishops in the Philippines broke what they described as their “collective silence” over “many disturbing issues” that have confronted the country in recent months. (CNS photo/Erik De Castro, Reuters)

MANILA, Philippines (CNS) — Catholic bishops in the Philippines broke what they described as their “collective silence” over “many disturbing issues” that have confronted the country in recent months.

In a pastoral statement issued at the end of their meeting in Manila Jan. 28, the bishops asked forgiveness from the faithful “for the length of time that it took us to find our collective voice,” reported ucanews.com.

In the statement “Conquering Evil With Good,” the bishops admitted they have observed how the “culture of violence has gradually prevailed in our land.”

They said the Jan. 27 bombing of the cathedral in Jolo was “further evidence to the cycle of hate that is destroying the moral fabric of our country.”

The prelates also said “cruel words” aimed at church leaders “pierce into the soul of the Catholic Church like sharp daggers.”

In recent weeks, the president urged people to either rob or kill bishops.

“We have silently noted these painful instances with deep sorrow and prayed over them,” read the bishops’ statement.

They said they took their cue from Pope Francis, “who tells us that in some instances the best response is silence and prayer.”

The bishops said they respect the “freedom of conscience and religion” of people, including Catholics who may have already renounced their faith.

The church leaders, however, said “freedom of expression does not include a license to insult other people’s faith, especially our core beliefs.”

The bishops admitted that when people do not understand the doctrines of the church, “we have also ourselves to blame. … Perhaps we have not been effective enough in our catechesis about the faith?”

“Like the leaders and members of any other human institution, no doubt, we, your bishops and priests, have our own share of failures and shortcomings as well.”

“We have long acknowledged that illegal drugs are a menace to society,” they said. They only began wondering about the direction of Duterte’s drug war when it was only poor people reportedly linked to the illegal drug trade who were killed.

“As bishops, we have no intention of interfering in the conduct of state affairs, but neither do we intend to abdicate our sacred mandate as shepherds to whom the Lord has entrusted his flock,” they said.

“No amount of intimidation or even threat to our lives will make us give up our prophetic role, especially that of giving voice to the voiceless.”

The bishops then urged the faithful to “be sober and alert” despite the threats.

“As members of God’s flock, we must learn to be brave, to stick together and look after one another,” they said.

“Let this moment be a time to pray, to be strong, wise and committed. Let this be also a teaching moment for us all, a moment for relearning the core beliefs, principles and values of our faith, and what it means to be a Catholic Christian at this time,” read the statement.

NEXT: CAFOD, other NGOs urge prayer for desperate situation in Yemen