Ireland agrees to reassess claims of workers in Magdalene laundries 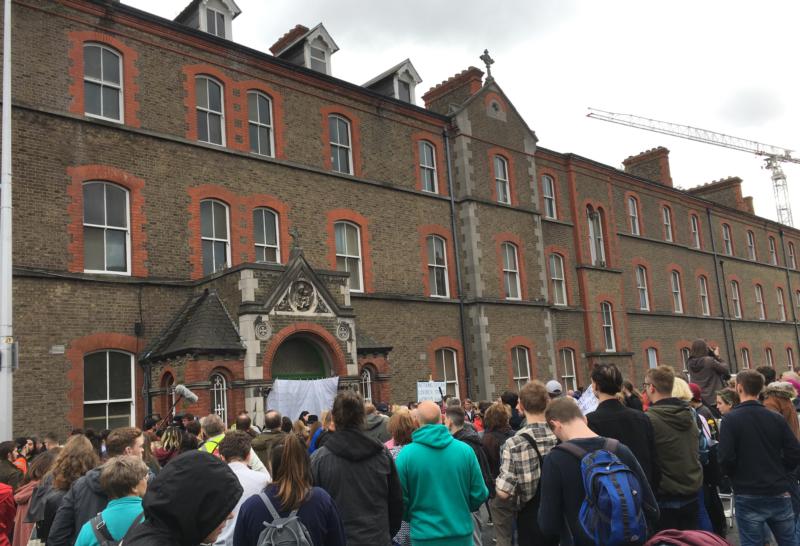 After the Stand4Truth rally Aug. 26, participants were led to the doors of Dublin’s last Magdalene Laundry, which closed in 1996. (CNS photo/Jamie Manson, NCR)

DUBLIN (CNS) — Women who worked in Ireland’s “Magdalene laundries” but were denied compensation under the state’s Magdalene Restorative Justice program have won their long-running battle to have their applications reassessed.

New legislation will ensure that payments to the women, many now over age 70, will be fast-tracked by the Irish state in an effort to make amends for the delay over their disputed compensation for their time working in the laundries.

Women were sent to these laundries by the state or by their families, usually for the “crime” of being pregnant outside marriage. Some were confined because they were unruly, orphaned or did not fit in. The laundries were part of Ireland’s architecture of moral constraint, along with mother and baby homes, industrial schools and psychiatric hospitals.

The need to extend the government’s redress program was highlighted in 2017 by Peter Tyndall, Irish ombudsman. In his report on the Magdalene Restorative Justice program, Tyndall highlighted that 15 of the complaints under investigation by his office concerned the Department of Justice’s rejection of redress applications by women who had worked in one of the 12 institutions listed as Magdalene laundries in the McAleese Report. The complaints were rejected because the women had not lived in the laundry itself, but in a training center or industrial school in the same building or located on the same grounds as a Magdalene laundry.

Some of the women took their cases to the High Court to try to force the Department of Justice to recognize that they were entitled to be part of the redress program.

In 2018, the Irish government relented and took the ombudsman’s recommendation and extended its Magdalene Restorative Justice Scheme to include those women who worked in the laundries but resided in one of 14 adjoining institutions. Ireland’s Department of Justice and Equality said that, by mid-December, 79 women had applied, including 52 whose earlier claims had been denied.

The Irish government, the congregations who ran the laundries and the women who worked in them are still reckoning with this painful part of the country’s past. Measures include the compensation program; a reconciliation ceremony held in June; and plans for a memorial to honor the 10,012 known entries by women and girls to Magdalene laundries from 1922 until the closure of the last laundry in 1996.

By late 2018, the Magdalene Restorative Justice Scheme has paid about $33 million to almost 700 women who worked and resided in 12 listed Magdalene Institutions.

Pope Francis’ visit to Ireland in August placed the spotlight on Magdalene laundries once again following his meeting with representatives of clerical and institutional abuse. At the Aug. 25 meeting at the apostolic nunciature in Dublin, Paul Redmond, chairman of the Coalition of Mother and Baby Home Survivors, gave Pope Francis a brief history of the Magdalene laundries. The pope told survivors that there was no parallel in Argentina for that sort of institution.

The congregations who ran the laundries have said that they were given charge of the women without any compensation from the state or families. The laundries, in which the sisters also worked, were not profitable but a means of support, they said, which the McAleese report also acknowledged.

None of the four congregations contacted for this article provided an interview, but several referred to their 2013 statements.

For instance, at that time, the Mercy Sisters said: “We acknowledge fully the limitations of the service we provided for these women when compared with today’s standards and sincerely wish that it could have been different. We trust that the implications of the changed context are understood by the wider society.”

None of the congregations have contributed to the restitution fund.

The Irish government’s decision to overturn its exclusion of some women from the compensation program may ease some of the anger of the former Magdalene residents, said Katherine O’Donnell, spokeswoman for the Justice for Magdalenes research group. But the delay in compensating them left some wondering if the state was serious about righting the wrongs of the past, she said.

In an interview with Global Sisters Report, O’Donnell outlined several concerns with Department of Justice officials’ administration of the compensation program. Women who formerly worked in the laundries, she explained, were not “given the full time allotted to them to recount their testimonies, and the word of a nun seemed to count for more,” she said.

O’Donnell stressed that much more is needed to be done to bring closure to this painful part of the women’s past.

“The Department of Justice was supposed to have a dedicated unit to help these women access all the kinds of services such as housing, health care, counselling, and they haven’t done that. There is a myriad of ways in which they are reneging on the redress scheme,” O’Donnell said.

The McAleese report was critical of the religious orders but also found evidence of substantial state involvement in the Magdalene system. This finding led then Prime Minister Enda Kenny to apologize in 2013 in the Irish Parliament on behalf of the state.

The report documented involuntary detention at the laundries and a failure to inform the women and girls why they were being detained or when they might be released. The median duration of stay according to the report was about seven months, but in many cases it was much longer. It noted that the women were stripped of their identities, unpaid and forced to work constantly. They were denied education and contact with the outside world, and some were subjected to humiliating and degrading punishments.

Yet the report also noted that “a large majority of the women who shared their stories with the committee said that they had neither experienced nor seen other girls or women suffer physical abuse.”

Mac Donald is a freelance journalist based in Dublin.