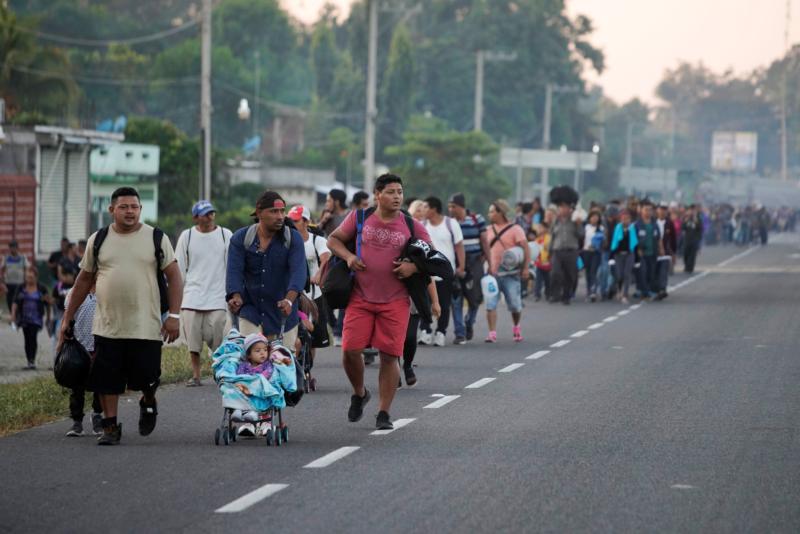 Part of a caravan of Central American migrants walk along a road in Ciudad Hidalgo, Mexico, Jan. 18, 2019, on their journey toward the United States. (CNS photo/Alexandre Meneghini, Reuters)

CIUDAD HIDALGO, Mexico (CNS) — At this normally bustling border crossing between Mexico and Guatemala, Central American migrants — part of a caravan that set out Jan. 15 from San Pedro Sula, Honduras — sat patiently on folding chairs in the shade. Mexican immigration officials distributed bottles of water, while members of the navy served meals of simple stew and slices of white bread.

When their names were read from a list, they proceeded to pick up one-year humanitarian visas, which allow them to freely travel through Mexico, work in the country and claim social benefits such as health care and education.

“I didn’t know they’d give us a visa,” said Josue Giron, 22, a welder from Honduras, who fled with the caravan after not being able make extortion payments.

“We didn’t believe it,” he added, pointing out that police in Honduras and border officials in Guatemala tried to stop the caravan’s progress. “We thought it was a trick. No government has wanted to help us.”

Mexico awaited the arrival of past caravans by deploying police and closing the border, prompting migrants to ford the Suchiate River, which separates Mexico and Guatemala.

This time, however, the new administration of Mexican President Andres Manuel Lopez Obrador has promised humanitarian visas, which are supposed to be processed within five days. Applicants can also wait in shelters set up for them while their paperwork is processed.

More than 14,000 migrants have applied for the humanitarian visas, Mexico’s National Immigration Institute tweeted Jan. 27. Long lines of applicants were still forming on the bridge connecting Mexico and Guatemala, according to media photos.

The issuing of humanitarian visas on the southern border comes as Mexico prepares to receive migrants applying for asylum in the United States.

Under the scheme known as “Remain in Mexico,” migrants with asylum claims in U.S. courts will have to stay south of the border as their cases proceed. Mexican’s foreign ministry objected to the plan but was going along with it.

Scalabrinian Father Pat Murphy panned the idea of returning asylum seekers to border towns, saying such places are often rife with violence, and migrants are targeted.

“It’s a joke to say it’s a safe country, and these people will be taken advantage of,” said Father Murphy, director of a migrant shelter in Tijuana. “The government here couldn’t take care of the last caravan in a decent way. It’s a mystery to me what they think they’re going to do with all these people arriving.”

Some Catholics working with the Central Americans traveling through Mexico welcomed the issuing of humanitarian visas, however, even as they expressed misgivings over the formation of caravans — something Father Murphy said gave many migrants “false hope” about crossing the border quickly.

“The treatment the government is giving to migrants is correct: welcome, registration, migratory status regularization and offers of work,” Father Alejandro Solalinde, a well-known migrant defender, tweeted about the humanitarian visas. “They can travel securely to wherever they want and in the way they want to.”

Father Solalinde has emerged as an unlikely critic of the caravans crossing the country. He previously told Catholic News Service that participants in past caravans — which were accompanied by the migrant-advocacy organization Pueblo Sin Fronteras — disregarded information offered to them on the difficulties of crossing the U.S.-Mexico border. The priest also counseled migrants that conditions were not favorable for trying to cross the border.

“There’s no reason to ‘caravanize’ the flow of migrants,” he said. “It would only help Trump.”

U.S. President Donald Trump has tweeted his displeasure with the caravans attempting to reach the U.S. border and accused governments in Mexico and Central America of doing nothing to stop them.

The church there has been serving 600 meals twice a day to migrants and providing shelter to them as they wait to apply for visas in Mexico.

Despite the difficulties, caravans continue to form, which migration observers attribute to poverty, violence and drought in Central America. The caravans also offer perceptions of protection as migrants move in large numbers, along with a way to cut out the cost of hiring a smuggler.

“The people traveling in the caravan are the poorest migrants,” said Carlos Lopez, an official with the Scalabrinian migrant shelter in Guatemala City. “They’re the ones that can’t pay for ‘coyotes,'” as human smugglers are called.

Travelers in the most recent caravan do not seem dissuaded by the possible problems at the U.S. border.

Giron, the Honduran migrant from near San Pedro Sula, said he had to pay $12 a week to gangsters in a country where work was irregular and he was having a hard time making ends meet.

He hopes to work in northern Mexico, where factory work is abundant, and earn enough to pay a smuggler to help him cross into the United States.

“If they capture me,” he said of crossing into the United States, “I’ll claim asylum.”

Others held out hope Trump would have a change of heart.

“If President Trump gives us the opportunity to work, that’s what we’ll do,” said Orlando Moran, 53, a bricklayer from El Salvador. “I’m sure God will allow it.”

NEXT: Vatican doctrinal official steps down amid investigation of solicitation