On flight to Panama, Pope confirms November trip to Japan 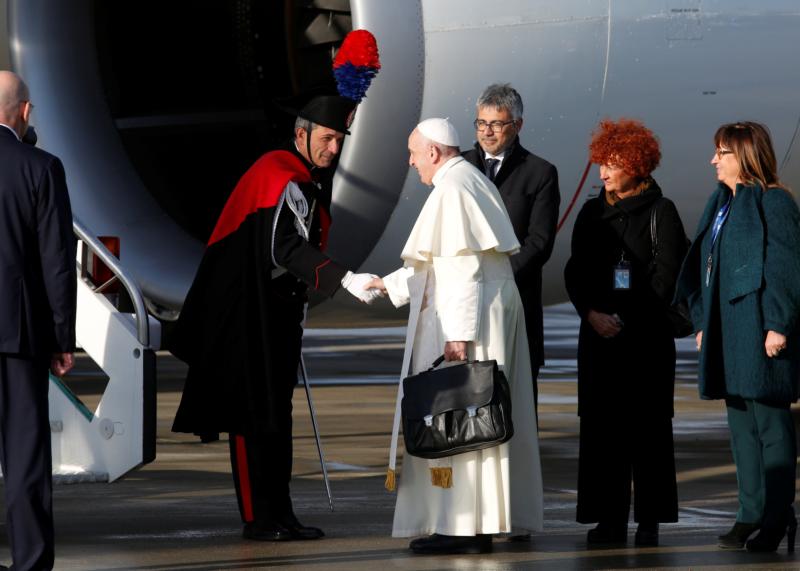 Pope Francis greets an officer of the Carabinieri, the Italian military police, as the pontiff boards the plane Jan. 23, 2019, at Fiumicino Airport in Rome for his visit to Panama for World Youth Day. (CNS photo/Remo Casilli, Reuters)

Pope Francis was greeted by dancers and was accompanied on the tarmac by Panamanian President Juan Carlos Varela and first lady Lorena Castillo Jan. 23. There were no speeches; because of the 13-hour flight from Rome, the official welcoming ceremonies by government officials and World Youth Day participants were scheduled for Jan. 24.

Panama City Archbishop Jose Ulloa Mendieta accompanied the pope through the streets of the capital to the apostolic nunciature, waving to pilgrims from a popemobile built in Panama with the help of young Panamanians.

The highlight of the visit was to be the vigil and closing Mass of World Youth Day, but Pope Francis also was scheduled to celebrate a penitential liturgy Jan. 25 with young inmates at Las Garzas de Pacora Juvenile Detention Center in Pacora. He also will visit Casa Hogar el Buen Samaritano (Good Samaritan Home), a center dedicated to helping people with HIV-AIDS.

During the flight from Rome to Panama, Pope Francis was asked by a Japanese journalist if he will be visiting the country.

“I will go to Japan in November. Get ready!” Pope Francis replied.

He also told another journalist aboard the flight that while there are no immediate plans to travel to Iraq, he hopes to visit one day.

“I want to go, I told them that I wanted to go, but they were the ones who told me, ‘Not right now, it isn’t safe,'” the pope said. “But I do want to go and I am following the situation closely.”

The pope, who is visiting Panama Jan. 23-27 for World Youth Day, thanked the journalists for their work in covering the event and led them in a moment of silence and prayer for Alexei Bukalov, a journalist for the Russian news agency ITAR-TASS, who died in December.

His voice trembling with emotion, Pope Francis remembered Bukalov as “a man of great humanism,” whom “I cared for very much.”

“He was a man capable of synthesizing reports in the style of Dostoyevsky. I am sure that we will all miss him,” the pope said.

As is his custom, Pope Francis greeted each of the 70 journalists on the plane, smiling and exchanging words with each one, accepting letters and posing for photographs.

An Italian journalist told Pope Francis of a recent visit he made to Tijuana, Mexico, where he witnessed the plight of the caravan of migrants making their way to the U.S. border, only to find a wall that “reaches all the way to the ocean.”

A wall that goes to the ocean “is madness,” the pope said. “It is fear that makes us crazy.”