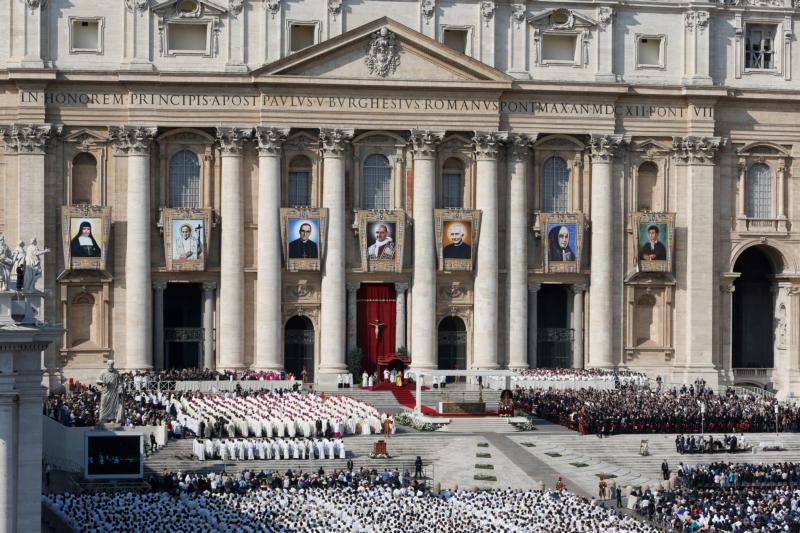 Pope Francis celebrates the canonization Mass for seven new saints in St. Peter’s Square at the Vatican Oct. 14, 2018. Pope Francis advanced the sainthood causes of three women and recognized the martyrdom of 14 religious sisters who were killed during the Spanish Civil War. (CNS photo/Paul Haring)

VATICAN CITY (CNS) — Pope Francis advanced the sainthood causes of three women and recognized the martyrdom of 14 religious sisters who were killed during the Spanish Civil War.

The pope formally recognized a miracle needed for the canonization of Blessed Marguerite Bays, a laywoman from Switzerland known for her spirituality in the face of great physical suffering and for bearing the stigmata of Christ.

Born in 1815, she grew up helping the peasant farmers in her small village and became a professed member of the Secular Franciscan Order.

She was particularly devoted to Our Lady and discovered she was cured of colon cancer on Dec. 8, 1854, when Pope Pius IX proclaimed the dogma of the Immaculate Conception. The same year, she started to show signs of the stigmata on her hands, feet and chest.

In other decrees signed at the Vatican Jan. 15, the pope:

— Recognized the martyrdom of Sister Isabella Lacaba Andia, who was known as Mother Mary del Carmen — the mother superior of a community of Franciscan Conceptionist nuns — and 13 of her companions. They were murdered “in hatred of the faith” in Spain in 1936. The move clears the way for their beatification.

— Recognized the heroic virtues of Mother Soledad Sanjurjo Santos of the Servants of Mary. Born in Arecibo, Puerto Rico, in 1892, she was known as the “Pearl of the Antilles” as she served as provincial superior of the Antilles and extended the congregation’s work in caring for the sick throughout Cuba, the Dominican Republic and Puerto Rico. She died in 1973.

— Recognized the heroic virtues of Polish Sister Anna Kaworek, who lived 1872-1936, and co-founded the Congregation of the Sisters of St. Michael the Archangel.

NEXT: New migrant caravan has left Honduras; why do they flee?