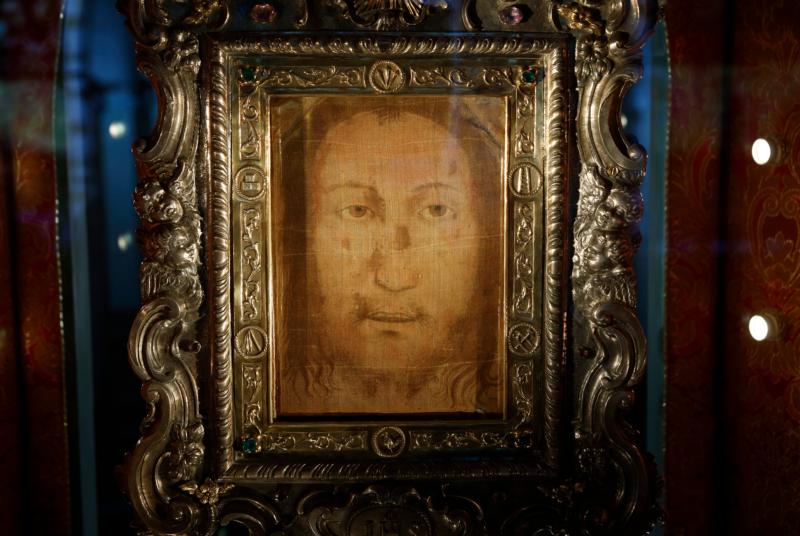 The Holy Face of Manoppello is pictured on display at the shrine in Manoppello, Italy, Jan. 11. Devotees believe that the almost transparent cloth was one of the burial shrouds that covered the face of Jesus in the tomb and that the image was formed miraculously at the moment of the resurrection. (CNS photo/Paul Haring)

MANOPPELLO, Italy (CNS) — At the Shrine of the Holy Face in Manoppello, visitors see a transparent cloth encased between two glass panes within an ornate silver frame above the sanctuary’s altar.

Once light is shined on the cloth of byssus fiber, the image of a bearded man, eyes open and mouth seemingly taking a breath is revealed.

Devotees of the Manoppello veil claim that it is “Veronica’s Veil” and that it was secretly moved to the little hilltop town in Abruzzo on orders from Pope Clement VII to protect it following the Sack of Rome in 1527.

Another image of Christ’s face known as “Veronica’s Veil” is displayed at St. Peter’s Basilica on Palm Sunday each year to bless pilgrims at the start of Holy Week.

Although the traditional Stations of the Cross include “Veronica wipes the face of Jesus,” none of the Gospels recount a woman wiping Jesus’ face as he carries his cross to Calvary.

A pious legend says Veronica later went to Rome to leave the relic with St. Clement, one of the early popes.

However, German journalist Paul Badde is convinced that the veil displayed by the Vatican for the past 400 years is a copy and that the true veil is in Manoppello.

“Every year on Passion Sunday, they show a hoax, I would say,” Badde told Catholic News Service Jan. 14.

The Capuchin friars at Manoppello have been the custodians of a veil since 1630.

For centuries, few people outside the small town knew of the cloth and its image of Jesus. But a Capuchin priest, Father Domenico di Cese, made it his life’s work to spread devotion to the Holy Face of Manoppello.

When he first saw the veil as a young priest in the 1930s, he knelt in shock. The face on the ancient linen looked like the same unidentified man who had rescued him from the rubble of a church after a major earthquake in 1915 when he was a child.

Father Cese died in 1978 and it wasn’t until 1999 that the veil really caught the world’s attention. That was when Jesuit Father Heinrich Pfeiffer, an art historian at Rome’s Pontifical Gregorian University, announced at a press conference that the cloth was the true “veil of Veronica,” stating that after conducting research, he discovered that the image on the veil could be perfectly superimposed on the face of the Shroud of Turin, the relic many believe is Jesus’ burial shroud.

Some devotees maintain the image’s connection to “Veronica” is not related to a woman who tried to soothe Jesus but is actually a form of the phrase “vera icona,” meaning “true icon.”

Capuchin Father Paolo Palombarini, parochial vicar of the shrine, told CNS, “Both pupils are open. But one can see that the right pupil is more closed than the one on the left because this is the first instance of the Resurrection and it happened just at it does when we wake up in the morning.”

“When we sleep,” he said, “we don’t realize it, but our pupils are completely dilated. In the morning, when we open our eyes and see the light, our pupils react by closing because they need some time to settle when passing from darkness to light.”

The Vatican does not formally recognize the authenticity of relics like the Veil of Manoppello or the Shroud of Turin. However, public veneration of such relics by popes often draw the attention of the faithful.

Such was the case when Pope Benedict XVI became the first pope to visit the Manoppello shrine in 2006 and venerate the image, Badde said. He told CNS that Pope Benedict had read his book on the veil and “decided to go there against enormous resistance in the Vatican.”

Still, during what Pope Benedict himself described as a “private pilgrimage,” he made no pronouncement about the image. Addressing priests, religious and pilgrims who packed the shrine, he said those who seek the true face of Christ can find it in their brothers and sisters, “especially the poorest and those most in need.”

“If we persevere in our quest for the face of the Lord,” Pope Benedict said, “at the end of our earthly pilgrimage, he, Jesus, will be our eternal joy, our reward and glory forever.”

Badde said, “He was the first pope after more than 400 years to get on his knees in front of this image, that’s what he did. That’s what will remain of his pontificate.”

Pope Benedict’s visit increased attention to the image, which continues to draw more pilgrims each year.

Cardinal Gerhard Mueller, former head of the Congregation for the Doctrine of the Faith, was scheduled to visit the shrine Jan. 20 to celebrate the feast of “Omnis Terra” (“All the Earth”), named after the first words of Psalm 65, “All the earth worships you, O God.”

Archbishop Salvatore Cordileone of San Francisco and Archbishop Bruno Forte of Chieti-Vasto, the diocese where the shrine is located, also were scheduled to attend.