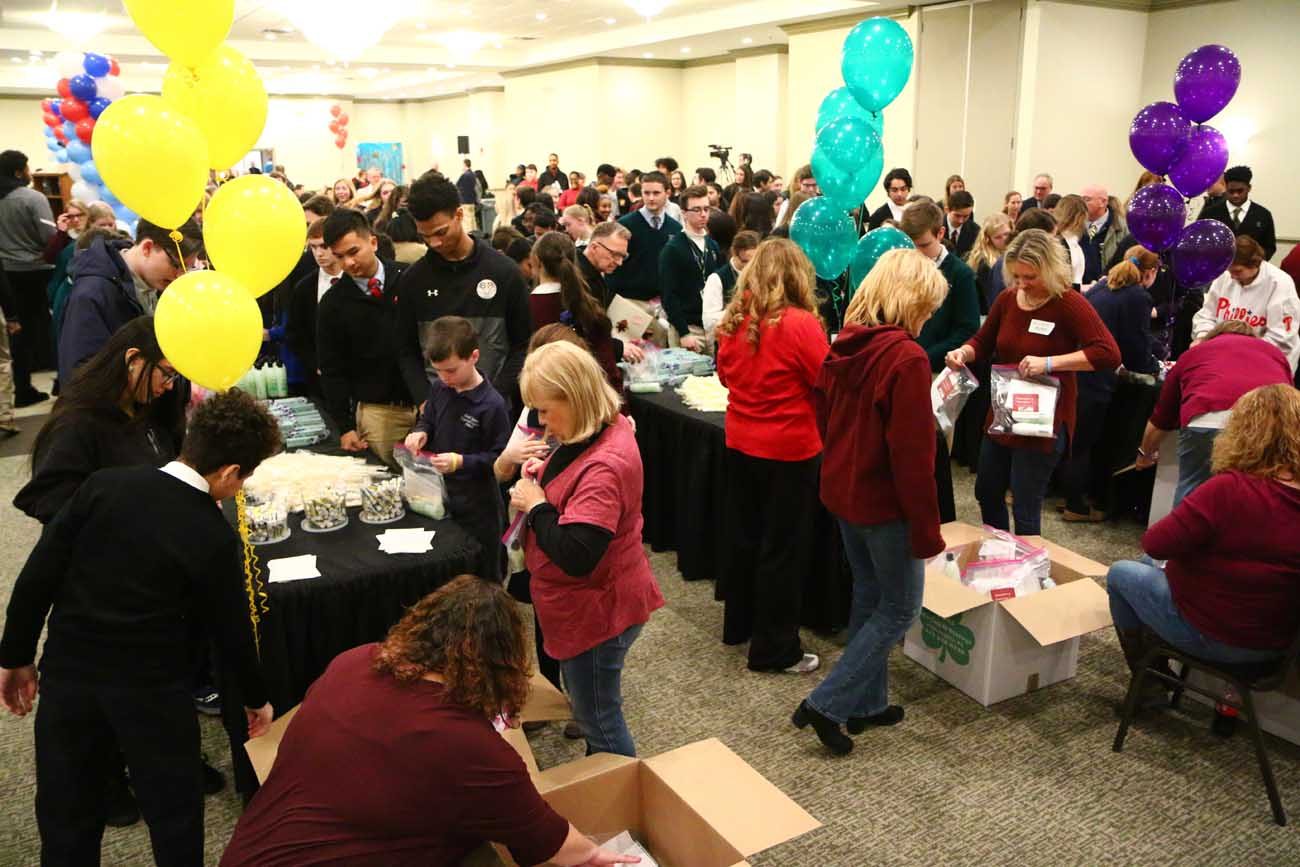 Approximately 450 students representing parish-based elementary schools, archdiocesan high schools and schools of special education gathered Feb. 2 at the St. John Neumann Center at the National Shrine of St. John Neumann to participate in a day-long service event, “From Generation to Generation, Sharing Our Faith Through Services to Others.”

The location had special significance. The center is located in what was one of the buildings of St. Peter the Apostle School, and St. John Neumann, as Bishop of Philadelphia, is credited more than any other with firmly establishing Catholic schools in parishes throughout his diocese, and he had a special fondness for St. Peter Parish.

His idea was not just learning the faith but sharing the faith; not just by word but by action, and that’s what Catholic Schools Week (Jan. 27-Feb. 2) is all about.

Over the course of the day young people combined to package 3,000 bags with personal  items to benefit individuals served by Catholic Housing and Community Services (CHCS).

(See our photo gallery of scenes from the day here, and watch a video on Facebook here.)

As a division of the archdiocesan Secretariat of Catholic Human Services, CHCS serves older adults through programs running throughout the Philadelphia region.

Presiding over the event was Bishop Michael Fitzgerald, who oversees Catholic education in the archdiocese. In his view, the event relates to something Pope Francis talks about all the time.

“It’s the relationship between the elderly and the young,” the bishop said. “Bringing the generations together, all of us can appreciate the wisdom of the elderly, mentoring the young people.”

One of those young people was Abigail Golemboski, a senior at Pope John Paul II High School in Royersford. This was her third time coming to the annual event.

“It’s wonderful to see how many of our high school peers are willing to serve like this,” she said. “There are so many different Catholic organizations. It is amazing to see them.”

Jason Bozzone, the president of her school, was also on hand with his students. “It’s not only the impact they are going to have on other people in the community, but it is also the impact of giving,” he said. “This is living the motto and mission and the great Christian values we have at John Paul II.”

But it wasn’t just the young people at the event. For example, Bonney Dos Santos, director of St. Monica Eldercare in South Philadelphia, was a representative of the elderly beneficiaries of the outreach. “We serve about 90 home-bound elderly,” she said. “It’s wonderful to see something like this.”

Hers is just one of the growing number of parish-based and community-based programs for seniors throughout the archdiocese.

The whole event was part of Catholic identity, bringing together Catholic Social Services and Catholic education, according to John Wagner, deputy secretary for Catholic Human Services and CEO of CHCS.

“This is a lesson the students can have for the rest of their lives,” he said, “to be part of the solution. It shows what can be done. We are focusing our energy on supporting seniors in the neighborhoods where they live.”

But while charity begins at home, it doesn’t end there. At this event another group was making rosaries for the Pontifical Mission Society, which spreads the Good News and performs both charitable and spiritual works in 120 countries around the world.

Whether at home or abroad, Catholic education plays a vital role in the mission of the church.

PREVIOUS: Each painful step brings them closer to holiness