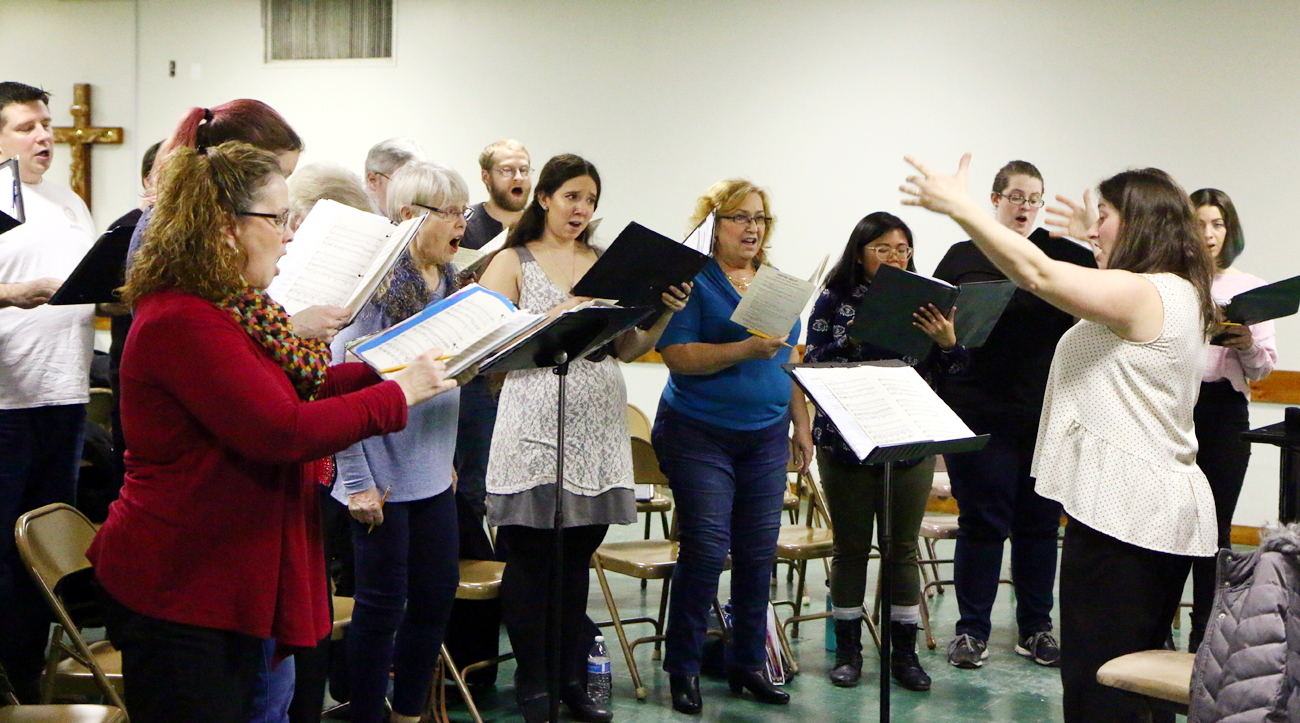 The choir of the Cathedral Basilica of SS. Peter and Paul rehearses with director Charlene Angelini, who said that membership in the semi-professional ensemble is on the rise. (Photo by Sarah Webb)

Liturgical music is alive and well in the Archdiocese of Philadelphia, according to Charlene Angelini, the archdiocesan director of liturgical music.

Angelini has a fitting surname for one who nurtures the angelic voices of the young, among her other duties in overseeing all of the musical activities of the Cathedral Basilica of SS. Peter and Paul.

A natural musician in her own right, Angelini manifested her talents as a pianist and cantor while still a child, and continued to develop them as a young adult. A graduate of the University of West Virginia with a degree in music, she served as a cantor at the Cathedral before being appointed to her present position in 2016.

As Angelini’s role at the Cathedral has expanded, Danielle Molan, who has a master’s in music from Westminster Choir College, has taken over the children’s choirs, while Mark Loria has become the Cathedral’s principal organist.

Children’s choirs require constant recruitment to replace members who outgrow them. Last summer, the liturgical music office conducted a very successful two-day “Cantate Domino” (“Sing to the Lord”) choir camp at the Cathedral. The camp attracted 55 kids, ages 8 to 16, from local parishes and schools, as well as home-schooled youth.

“We are able to reach children throughout the diocese,” Angelini said.

(Watch a video of the Cathedral Choir of SS. Peter and Paul in rehearsal.)

The camp, which will be repeated this year, attracted new members to the choir. The ensemble’s $100 tuition is modest, considering that it includes 28 two-hour rehearsals, an introduction to music theory and the opportunity to perform at an evening concert.

The backbone of the Cathedral music program is the adult choir, a mix of both professional and volunteer singers. The group is already rehearsing for the major events of the coming months, starting with the St. Katharine Drexel feast day Mass on March 3, at which the choir will perform the Bach Motets.

A musical celebration for this feast is especially appropriate since St. Katharine’s father, Francis Drexel, was an accomplished organist himself and a major donor to the Cathedral who at times played the Cathedral organ. The March 3 liturgy will be the first feast day Mass for St. Katharine since her remains were enshrined in the Cathedral last November.

Angelini said that the celebration will include a March 2 preview concert (and again on March 3) at the Cathedral, with a program featuring African-American music in honor of the saint’s ministry to African Americans.

The St. Katharine feast day celebrations are just a prelude to what is probably the Cathedral’s busiest season for major liturgies.

“We are preparing for the Easter season, we have the Chrism Mass and we have the priesthood ordinations,” Angelini said.

Both the children and adult choirs are looking forward to a good year, and membership is on the rise, according to Angelini.

“The people are being nurtured and fed spiritually at the Cathedral,” she said.