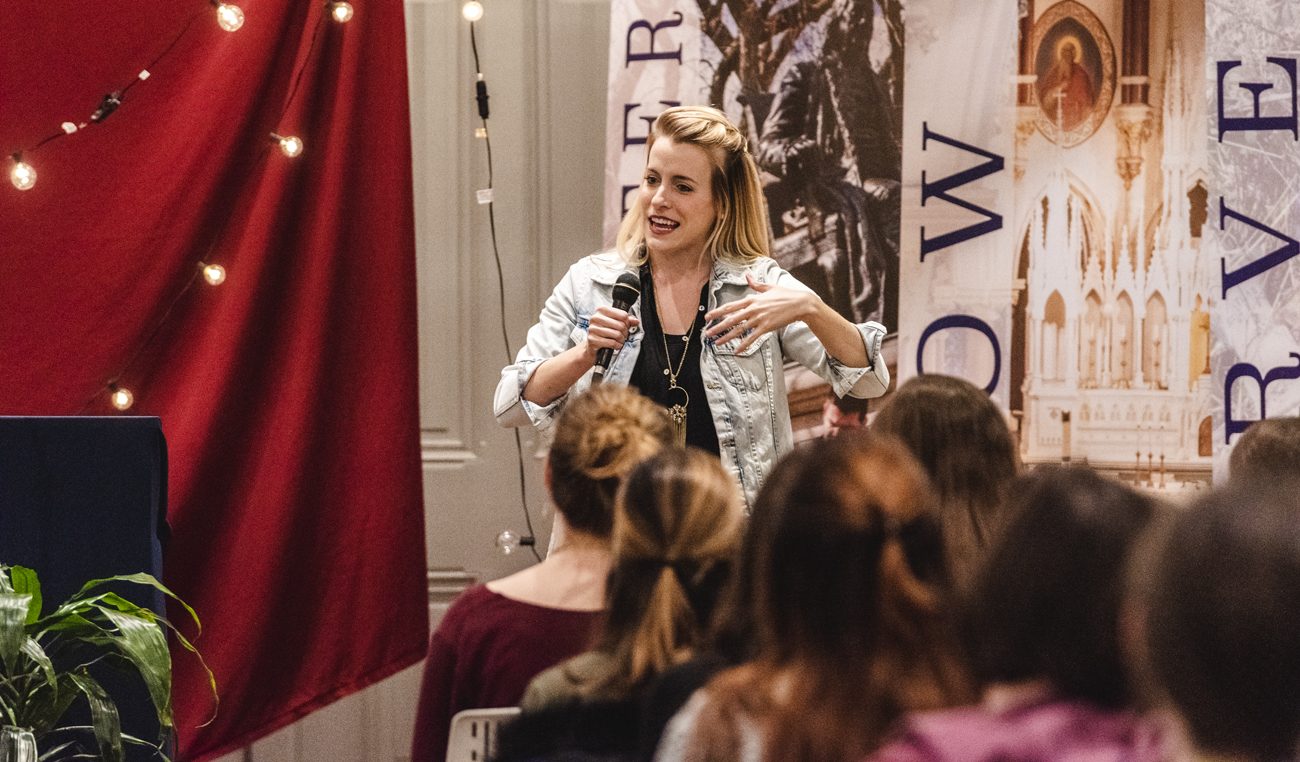 Popular Catholic speaker Emily Wilson talks to the predominantly female crowd of some 150 attendees Feb. 16 at the Newman Center of the University of Pennsylvania on the campus of St. Agatha-St. James Church, Philadelphia. (Photo by Sean Legg)

The author who has spoken at conferences around the world was the keynote of the Speaker Series for the University of Pennsylvania’s Newman Center, based at St. Agatha-St. James.

Wilson is largely known for her You Tube videos where she addresses topics most women struggle with: sex before marriage, social media comparisons and the hook up culture, to name a few.

Her talk focused on overcoming the challenges of recognizing the blessings in one’s life. Comparisons to others, coveting what others have and developing a mindset of gratitude were at the heart of the night’s discussion. She also challenged the women to speak the truth of their beauty to other women on campus.

“It’s so rare to find someone who isn’t afraid to vocalize what we all feel,” said Gabbie Ramos, a junior at Penn. “I’ve followed Emily for years and have always found such inspiration in her unapologetic approach to standing up for what women deserve.” 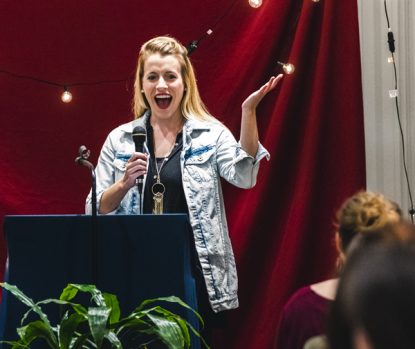 Emily Wilson speaks Feb. 16 at the Newman Center of the University of Pennsylvania. (Sean Legg)

Marya Lieb, a senior at Penn, has been working on getting Emily to speak at St. A-J’s for more than a year and a half. “You have to book her months, if not years, in advance because of the demand, but persistence paid off.”

The Women’s Household prepared the refreshments, and although the audience was overwhelmingly women — some traveling nearly two hours to attend — a handful of men were also present.

Alejandro Gómez, a graduate student at Villanova, came because he heard of the event through his sister.

“Although I was skeptical at first, I felt deeply moved by the message she had to bring,” Gomez said. “(We) men struggle with the voices in our hearts that tell us, ‘You’re not good enough’ and ‘You’re not worthy of goodness and beauty’ as well. (Wilson’s talk) reminded us that we too have dignity and are blessed, even when we don’t realize it.”

Alberto Amaral, a 2017 graduate of Penn, echoed this, saying, “I really enjoyed Emily Wilson’s talk. Even though it was geared towards women, I think a lot of the wisdom she shared was applicable to men’s lives as well.”

Wilson also had the audience laughing. A southern California native, she quipped, “I might not always notice or express gratitude when driving next to the ocean, but I noticed Boathouse Row.”