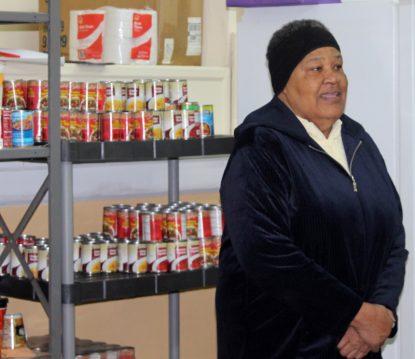 The St. Ignatius Food Pantry, where Gloria Ayres has volunteered to help feed her West Philadelphia neighbors since 2002, is one of many parish-based sites that have seen an uptick in people trying to stretch their food budgets since the partial government shutdown that ended in February. (Photo by Sarah Webb)

The aftermath of the recent federal government shutdown will be felt for weeks, even months, according to staff from archdiocesan Nutritional Development Services (NDS).

“A lot of people in our society live very much on the edge, from paycheck to paycheck,” said Lizanne Hagedorn, executive director of NDS. “For those who lost income during the shutdown, it will take a while to get back on equal footing, and some may never get there.”

The 35-day shutdown, the longest in U.S. history, ended on Jan. 25. A second shutdown was averted with the Feb. 15 approval of a new spending plan.

But the ripple effects of the prolonged budgetary stalemate will continue, said Hagedorn, whose office hosted multiple emergency food markets for furloughed workers during the past two months.

She said that food pantry visits were up across the region, including Delaware County, which may have seen a spike due to the number of Transportation Safety Adminstration (TSA) employees in the area.

Due to the shutdown, February disbursements for federal Supplemental Nutrition Assistance Program (SNAP) benefits were issued on Jan. 16. As a result, recipients will need to stretch the benefits over 40 days, rather than the usual 28- to 31-day cycle. For some Pennsylvania recipients, that number could extend to 56 days.

The new “SNAP gap” — a term that usually describes the limits of the program’s reach in a given area — has become symbolic of the shutdown’s cascading impact. Some area families are now being forced to choose between, or severely ration, food and other expenses such as medical care.

“Food ends up being on the back burner,” said Brooke Mullen, community relations director for NDS.

Baby items in particular can quickly exhaust family funds. Disposable diapers, which are not covered by state or federal benefits, can cost about $70 to $80 a month per infant.

Many times, Hagedorn added, those in need choose inexpensive but “low-nutrient foods like prepackaged ramen noodles” that can aggravate existing health conditions or lead to new ones, such as heart disease, diabetes and obesity-related disorders.

Thanks to an earlier annual appeal, NDS has been able meet the increased demand for food assistance, said Hagedorn.

However, without sustained donations, that margin could quickly erode if another economic crisis developed.

Hagedorn said that parishes throughout the archdiocese are a key resource for NDS’s community food program, and encouraged regular food collections to replenish pantry stock levels throughout the year.

“Pantries can sometimes be difficult for clients to access if the hours are limited,” Hagedorn said.

Mullen added that many clients “are often working two to three jobs and can’t fit a food bank visit into their schedules.” Lack of convenient public transportation, and the challenge of carrying large supplies of groceries by bus or subway, can also hinder client access.

Hagedorn said that “parishes can jump in with any or all” of a number of community service opportunities offered by NDS to benefit almost 70 food cupboards, soup kitchens and outreaches it supports throughout the five-county area. The sites include those located at the five Catholic Social Services’ Family Service Centers. Online donations are also accepted through NDS’s website.

NEXT: City schools close early ahead of Wednesday’s expected snow