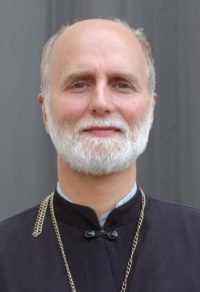 Bishop Andriy Rabiy, an auxiliary bishop of the archeparchy, has been apostolic administrator since April 16, 2018. The pope named him to the post following the resignation of Archbishop Stefan Soroka, now 67, for medical reasons.

His appointment was announced Feb. 18 in Washington by Archbishop Christophe Pierre, apostolic nuncio to the United States.

The pope also named an apostolic administrator for the Paris-based eparchy: Bishop Hlib Lonchyna of the Eparchy of the Holy Family of London, which is for Ukrainian Catholics in Great Britain. The bishop, who turns 65 Feb. 23, is a native of Steubenville, Ohio.

Archbishop Gudziak’s installation will take place June 4 at the Ukrainian Catholic Cathedral of the Immaculate Conception in Philadelphia.

“This is great and awesome news!” Bishop Rabiy said in a statement. “Congratulations and prayers for our new metropolitan!”

In addition to Bishop Rabiy, the archeparchy said, Auxiliary Bishop John Bura, the clergy, monastic orders and the faithful “wholeheartedly and joyfully welcome the news.”

“I have a sense of peace, despite the strong emotions that I am experiencing,” he said, noting that now-retired Archbishop Soroka has “welcomed me in the Philadelphia Archeparchy many times. He gave me prescient advice when I was beginning my pastoral service in Paris: people and pastoral works first, not buildings.”

“Bishop Andriy Rabiy, energetic and active as apostolic administrator, has been ushering me home with care and competence,” he added in a Q-and-A released by the eparchy. “The other bishops of the metropolia have fraternally encouraged me in these days. I eagerly await the encounter with them and the archeparchy’s clergy, religious and faithful.”

Born Nov. 24, 1960, Archbishop Gudziak graduated from Syracuse University in 1980 with a duel bachelor’s degree in philosophy and biology. He moved to Rome to study at Holy Sofia College and the Pontifical Urban University, earning a degree in theology in 1983. He studied at Harvard University from 1983 to 1992 and earned a doctorate in Slavic and Byzantine cultural history.

He moved to Ukraine, where he was the founding director of the Institute of Church History and coordinator of an oral history project to collect the stories of those who survived and maintained their faith under communist repression of the church.

He was ordained to the priesthood in 1998 and was named vice rector and then rector of the Lviv Theological Academy in Ukraine in 2000. The academy grew into the Ukrainian Catholic University in 2002, and he was named its rector and president.

On July 21, 2012, Pope Benedict XVI accepted the resignation of Bishop Michel Hrynchyshyn, head of the eparchy serving Ukrainian Catholics in France, Belgium, the Netherlands, Luxembourg and Switzerland, and appointed Bishop Gudziak his successor. He was ordained a bishop Aug. 26, 2012, and installed in a Divine Liturgy Dec. 2, 2012.

On Jan. 18, 2013, Pope Benedict raised the Paris-based church jurisdiction to the level of eparchy and named it after its cathedral, St. Volodymyr the Great.

Archbishop Gudziak is the author of over 50 studies on the history of the church, theological training and on different topics of cultural relevance. In May 2018, he received an honorary doctorate of humane letters degree during the 164th commencement of Syracuse University.

He will remain president of the Ukrainian Catholic University in Lviv, which in effect amounts to continuing to serve as chair of the board of trustees.

He also will continue to be a member of the permanent synod of the Ukrainian Catholic Church, which meets four times a year, usually in Kiev.

The Ukrainian Catholic Archeparchy of Philadelphia includes the District of Columbia, Virginia, Maryland, Delaware, New Jersey and parts of eastern Pennsylvania. It has a total Catholic population of about 15,000.

“At the beginning I seek to listen and learn, to become brother, father, and pastor for the clergy and faithful,” Archbishop Gudziak said about his appointment. “It is important to pray and think things through, to develop a future vision for the Archeparchy of Philadelphia and to work closely with the other eparchies of the metropolia, as well the Eastern Catholic, Roman Catholic and Orthodox bishops and their clergy and faithful.

“I hope that we can make a step forward in seeking ecumenical cooperation with our Protestant neighbors, and interreligious, inter-ethnic and interracial harmony,” he continued. “The poor and marginalized should be in our heart.”

For example, he said, “the mentally handicapped became central to our pedagogy and mission” at the Ukrainian Catholic University, and “the poor can help us see God, because Jesus is poor in this world.”

“I believe that we need to listen to each other and speak heart to heart,” the archbishop said. “I hope to lead by listening to the Lord and my brothers and sisters. For now, it’s essential for me to hear well and not prematurely to formulate agendas, which might be merely of my own making.”

Editor’s Note: The full text of Q-and-A with Archbishop Gudziak can be found on the Facebook page of the Philadelphia Archeparchy.