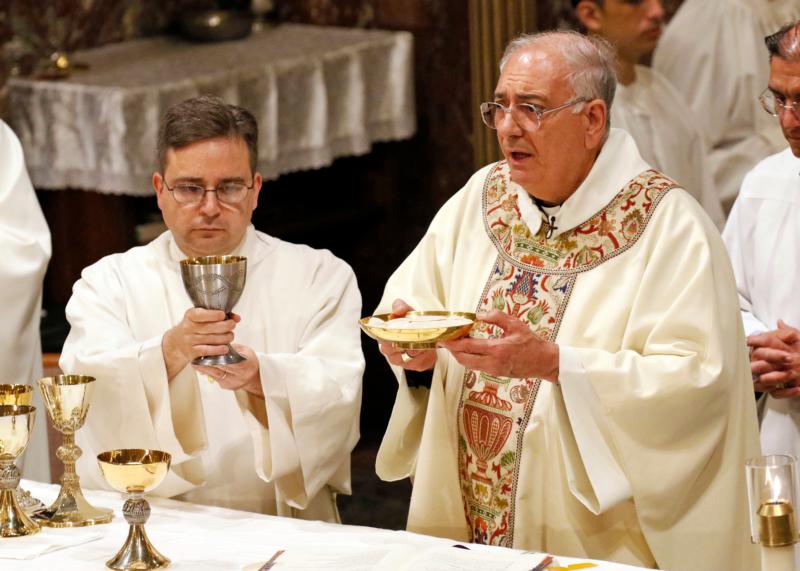 BROOKLYN, N.Y. (CNS) — The Diocese of Brooklyn Feb. 15 released a list of clergy credibly accused of sexually abusing a minor, saying that the 108 names on the list represent less than 5 percent of clergy who have served in the diocese in its 166-year history.

The diocese said in a news release that about two-thirds of the accused priests are deceased and that the “vast majority” of the cases involved priests who were ordained between 1930 and 1979.

“As Scripture says, there is nothing hidden that will not become visible, nothing secret that will not be known and come to light,” said Brooklyn Bishop Nicholas DiMarzio in a video message accompanying the list’s release.

“We know this list will generate many emotions for victims who have suffered terribly. For their suffering, I am truly sorry,” he said. “I have met with many victims who have told me that more than anything, they want an acknowledgment of what was done to them.

“This list gives that recognition and I hope it will add another layer of healing for them on their journey toward wholeness,” he said, “and help our church in its mission to restore the faith of all those who have been profoundly impacted by sexual abuse.”

The list has been published on the diocesan website, www.dioceseofbrooklyn.org, along with Bishop DiMarzio’s video message in English and Spanish. It contains names of clergy who have been convicted, who have admitted to sexual misconduct with a minor or have had allegations determined credible by the Independent Diocesan Review Board.

There are two sections: One lists 67 clergy members of the diocese with credible allegations; the other section lists 41 diocesan clergy who were “deceased/or resigned prior to a finding of credibility.”

“By credible,” the new release said, “diocesan officials believe that the allegation(s) may be true.”

The diocesan news release noted that the list shows the number of incidents of clergy sexual abuse peaked in the 1960s and 1970s, but the reports largely came in after 2002, the year the U.S. bishops enacted their “Charter for the Protection of Children and Young People.”

The reports peaked again in 2017, the diocese said, when it started the Independent Reconciliation and Compensation Program, which aims to be another possible mechanism to help bring closure to survivor-victims.

This program is administered independently by Kenneth Feinberg, who is well known for his administration of compensation programs for victims of the 9/11 terrorist attacks, the movie theater shooting in Aurora, Colorado, and the BP Deepwater Horizon oil spill.

Bishop DiMarzio committed to releasing the list at regional meetings he held with lay Catholics around the diocese in late 2018 to answer their questions about the sex abuse crisis. Videos from those meetings — in English and Spanish — also are posted on the diocesan website.

In those meetings, the diocese outlined the various programs mandated by the U.S. bishops’ charter, including sexual abuse awareness training for children and adults. The adults who receive the training are all those who work directly with children: clergy, teachers, parish and academy/school employees, catechists and volunteers. All employees and volunteers also must agree to initial and ongoing criminal background checks and must sign a code of conduct.

The charter also mandates a zero-tolerance policy that states any clergy member credibly accused of sexually abusing a minor is permanently removed from ministry.

The diocese said that since 2002, it has shared all of its files and allegations against clergy with the district attorneys of Brooklyn and Queens, the two New York boroughs that comprise the diocese.

The Brooklyn Diocese, like all U.S. dioceses, has an Office of Victim Assistance to help victim-survivors by providing referrals for therapy, support groups, and there is a yearly healing Mass to pray for all who have been impacted by sexual abuse.

In 2004, Bishop DiMarzio established an independent reporting line — (888) 634-4499 — for anyone to report allegations of abuse. All reports generated are immediately reported to the Brooklyn or Queens district attorney.

“Evidence to date shows that the charter has worked,” the diocesan news release said. “Since 2002, there have been two credible cases involving active diocesan clergy.”

“While even one is too many, this shows that we are on the right path to ensuring these horrendous acts of abuse are never repeated,” Bishop DiMarzio said in his statement.

NEXT: Speaker: Only way forward is to allow Christ ‘to come in, encounter us’