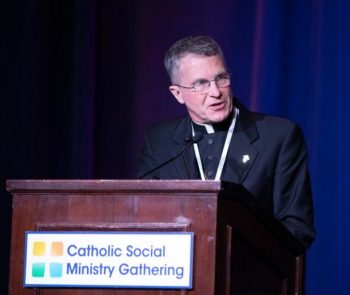 Archbishop Timothy P. Broglio of the U.S. Archdiocese for the Military, chairman of the U.S. Conference of Catholic Bishops’ Committee on International Justice and Peace, welcomes and introduces speakers Feb. 4, 2019, for a panel discussion about domestic and international policy for immigrants at the Catholic Social Ministry Gathering in Washington. (CNS photo/Tyler Orsburn)

WASHINGTON (CNS) — With the gifts given them through baptism, confirmation and the Eucharist, Catholics have the tools needed to repair a world broken “in thousands of pieces,” said the archbishop who chairs the U.S. bishops’ Committee on International Justice and Peace.

“At the end of every Mass we are sent forth not merely to clear out the church, but go and share what we have experienced,” said Archbishop Timothy P. Broglio of the U.S. Archdiocese for the Military Services at a Feb. 4 morning Mass during the Catholic Social Ministry Gathering in Washington.

One thing people have to be prepared to ditch, Archbishop Broglio said, is their tacit acceptance of the status quo.

Referring to that day’s Gospel reading of Jesus casting out demons from a man and putting them into a herd of swine which then hurled themselves off a cliff, Archbishop Broglio noted the townspeople’s response to Jesus: “Please go away.”

“A poor possessed man was cured; a miracle occurred, but the important measure in this town in pagan territory was the livelihood,” Archbishop Broglio said. “The self-interest of the crowd fails to comprehend that the liberation of one person created in the image and likeness of God is more important and has lasting value far beyond the funds lost in the commerce of pigs.”

He added, “Of course, the liberation of the possessed man is also the promised liberation of all of us. Without faith it is almost impossible to understand anything about authentic life.”

Archbishop Broglio posed the choice this way: “Either we follow him and center our lives in him or we remain frightened thinking that the cost is too great. The decision is not made only once, but constantly in our lives.”

He said, “There are many ways to engage in this process. One of them is our prayer this morning. Another is our attempts to make our voices effective, our vote is another way.”

Archbishop Broglio said, “If the current crisis of trust teaches us anything, it is that all of us — bishops, religious, priests and laity — must be coherent.

“One of the challenges of our Catholic faith is its universality: We can never be reduced to one doctrine or dismissed as right, left or center,” he added.

“My belief in the dignity of the human person from conception obliges me to defend the migrant or to be concerned because innocent people in Yemen are dying in a war not of their making,” the archbishop continued. “The homily is not the place to outline all of the crises in today’s world, but we know that the love of God urges us to be concerned.”

Archbishop Broglio prefaced his homily with the tale of the English violinist who was lent a Stradivarius to perform at a concert in Iceland. The violinist stumbled and fell on the concert stage. He survived the fall; the violin, not so much. But a patient restorer painstakingly restored the Stradivarius.

“We use our gift of faith professed and lived as the expertise to put our world together once again,” Archbishop Broglio said. “We want the Stradivarius to be played with all its richness and our world, once restored and reconciled, to realize its potential.”