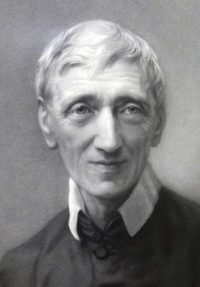 CHICAGO (CNS) — When the Vatican announced Feb. 15 that Pope Francis had signed a decree recognizing a miracle attributed to the intercession of Blessed John Henry Newman, clearing the way for his canonization, there was rejoicing in Chicago.

The proposed miracle that God worked through the intercession of Newman in 2013 involved a local mother who faced life-threatening complications during her pregnancy but suddenly recovered when she prayed to the English cardinal for help.

The woman, who declined to comment at this time but said she will share her story with the Chicago Catholic, archdiocesan newspaper, at a later date, lives in the Diocese of Joliet, but, given the resources available in the Archdiocese of Chicago, her case was transferred to the tribunal here for investigation.

Dr. Gerald Casey, the lead medical expert in the local process, said he has been forever changed by the experience.

“It was the most enriching experience of my spiritual life,” said Casey, who lives in Wilmette and attends Sts. Faith, Hope and Charity Parish in Winnetka.

Church law has a process, much like a trial, that it follows when investigating miracles. The woman, her husband, her physician and her spiritual director all were interviewed, or deposed, during the process.

“The true spiritual experience was in the stages of the depositions. I literally cried when we were deposing her. It struck to my very heart, because I could feel a presence that I had never felt before in my life,” Casey said. “It was one thing to read the materials, but it was quite another thing to hear her recitation of what had occurred, not just during that time but in the prior pregnancies and her miscarriages.”

The stay-at-home mother’s pregnancy was considered high risk because she was over 40 and had suffered previous miscarriages. As a result, her doctor ordered blood tests on the baby early on and monitored the pregnancy closely.

She started to bleed during the pregnancy and was diagnosed in spring 2013 with a subchorionic hematoma, a blood clot in the fetal membrane. The only thing doctors can do for that condition is prescribe bed rest. If the blood clot ruptures, it can result in a spontaneous miscarriage.

Bed rest for a mom with three small children is not so easy, Casey said.

“Then the morning that the event occurred, she had gone downstairs, had made her children breakfast and started to bleed more,” he said, reading from notes he took during the mother’s deposition.

She started to hemorrhage and locked herself in the bathroom. She felt she was losing her baby. At that moment she called out, “Cardinal Newman, please stop the bleeding!”

Afterward, the woman climbed into bed and called her doctor. He told her to come in that afternoon to see him.

“She came in the afternoon and fetal heart tones were normal and she went home. She was able to continue all normal activities for the entire rest of her pregnancy,” Casey said.

She has since gone on to have two more children through normal pregnancies. By all indications, she should have lost the baby.

As part of the process, Casey had two maternal fetal specialists also review the medical records and depositions.

“None of us had ever heard of anything like this occurring,” Casey said.

At no point were Casey or the other doctors asked if a miracle occurred. They only had to answer if there was any known medical explanation for what happened.

Oblate Father William Woestman serves as the promoter of justice in the archdiocese’s tribunal and participated in the canonical investigation of the miracle. He is also author of “Canonization: Theology, History, Process.”

“You could see it was painful for her to talk about what she went through,” Woestman said of the woman. “She was a very impressive person.”

After the local process for the miracle concluded, it was sent to Rome for another series of investigations, he explained. That outcome was revealed Feb. 13.

Saints and miracles are still relevant today, Woestman said, adding that he often thinks of the saints who prayed in Holy Name Cathedral, like Sts. John Paul II, Teresa of Kolkata and Mother Cabrini. He hopes one day Father Augustus Tolton will be added to that list.

“We all want saints we knew,” he said. “We want saints that walked on the same sidewalks we walk on or who breathed the same air we do.”