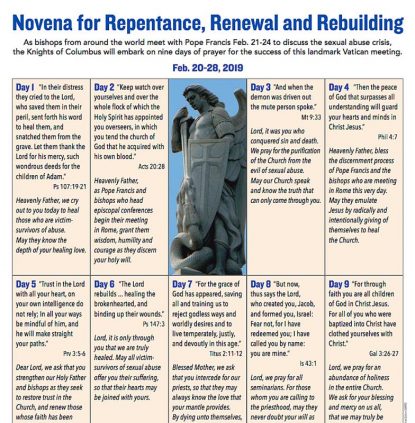 As Pope Francis and church leaders from around the world gathered for the Vatican’s summit on child protection, Supreme Knight Carl Anderson and Baltimore Archbishop William E. Lori, supreme chaplain, urged Knights and their families to set aside time for a “Novena for Repentance, Renewal and Rebuilding.” Click to enlarge. (CNS photo/Knights of Columbus)

WASHINGTON (CNS) — When they aren’t bagging lunches, serving soup at shelters or preparing pancakes after morning Mass, you can often find members of the Knights of Columbus in prayer.

And now Supreme Knight Carl Anderson and Baltimore Archbishop William E. Lori, supreme chaplain, have given the Knights a prayer mission worthy of the organization’s perpetual dedication to service.

In response to the Vatican’s summit on child protection and the clerical sexual abuse crisis, with Pope Francis and almost 190 church leaders from around the world gathered together Feb. 21-24, Anderson and Archbishop Lori urged their brother Knights and their families to set aside time over a nine-day period to say a “Novena for Repentance, Renewal and Rebuilding.”

A guide to the full novena, which began Feb. 20 and will end Feb. 28, can be found on the Knights website.

“We must stand in solidarity with our priests and bishops, and join them and lay Catholics in forging a path of renewal and fraternity that puts Christ at the center. Only then can actions be taken to end this scourge,” Anderson and Archbishop Lori said in a letter to Knights announcing the novena.

“This effort must start with prayer,” they continued. “Prayer must guide and inform the bishops’ meeting in Rome and the urgent renewal needed in dioceses and parishes around the world.”

Each day of the prescribed novena includes a reading from Scripture and a unique prayer for the intentions of victim-survivors, bishops, priests and seminarians, and for strengthening the church. Every recitation concludes with an Our Father, a Hail Mary, a Glory Be and a prayer to St. Michael the Archangel, defender of the church.

In their announcement on the novena, Anderson and Archbishop Lori also noted the Knights-sponsored nationwide pilgrimage of the incorrupt heart of St. John Vianney, the patron saint of parish priests, currently underway.

“We have been deeply moved to see the impact of this relic on the faithful, and particularly on priests and seminarians as they implore the intercession of the patron saint of parish priests whose holiness and integrity they strive to emulate,” they said, adding that in light of the summit, they are “especially mindful of this great saint’s example.”

The holy relic of the saint — popularly known as the Cure d’Ars — is on a six-month tour. It is currently in the Los Angeles Archdiocese and will be there through Feb. 26.

The Knights launched the “Heart of a Priest” tour in the wake of the clergy sexual abuse crisis in the Catholic Church.