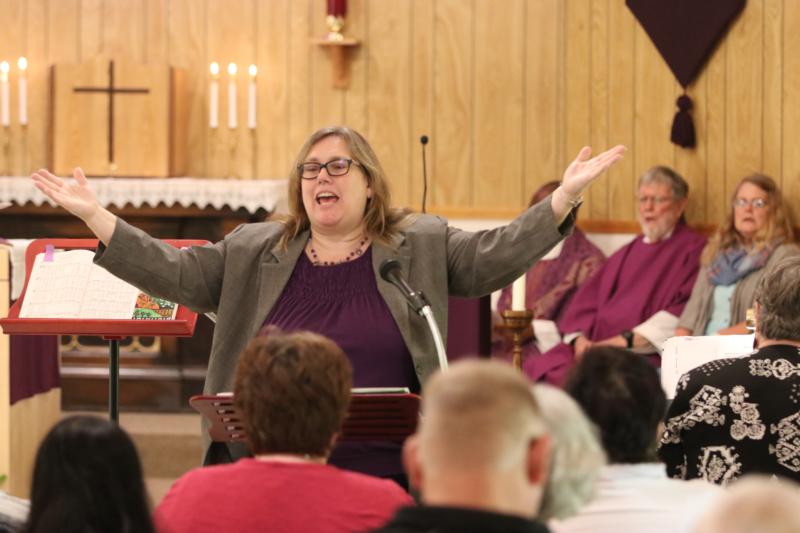 Carol Fiel directs the choir and urges the congregation to join in during Mass in 2017 at St. John the Baptist Mission in Clatskanie, Oregon. Portland Archbishop Alexander K. Sample issued a new pastoral letter calling for sacred music characterized by sanctity, beauty and universality. “Only music which possesses all three of these qualities is worthy of the holy Mass,” he wrote. (CNS photo/Ed Langlois, Catholic Sentinel)

PORTLAND, Ore. (CNS) — Portland Archbishop Alexander K. Sample in a new pastoral letter said that only sacred music that is characterized by sanctity, beauty and universality “is worthy of the holy Mass.”

He explained that ancient or modern music can qualify, but that Gregorian chant is the preferred music for Catholic worship.

His 21-page pastoral titled “Sing to the Lord a New Song” seeks more chant at Masses and urges all parishes in the western Oregon archdiocese to get a pipe organ.

The Jan. 25 letter emerged while Archbishop Sample was leading a pilgrimage in Panama for World Youth Day. Among the activities was the celebration of Mass in the extraordinary form, known as the Tridentine rite, at which the archbishop preached. He said the ancient rite can “speak very powerfully” to young people.

“The beauty, dignity and prayerfulness of the Mass depend to a large extent on the music that accompanies the liturgical action,” the archbishop wrote. He cited many popes, including Pope Francis, who once warned of “mediocrity, superficiality and banality” in liturgy.

When it comes to choosing music for Mass, Archbishop Sample said, there are objective principles, not simply a surrender to taste.

Sacred music’s purpose is the glory of God and the sanctification of the faithful, he said, adding that sanctity, beauty, and universality are the essential qualities that flow from that dual purpose.

Not every form or style of music is capable of being rendered suitable for the Mass, he wrote. As examples, he said that the Gloria of the Mass in a polka beat or in rock style is not sacred.

The archbishop explained that Gregorian chant has long held “pride of place” in Catholic liturgical music, a statement made during the Second Vatican Council and affirmed by popes. Decades before, Pope Pius XI urged that the faithful be taught to sing chant.

“Given all of this strong teaching from the popes, the Second Vatican Council and the U.S. bishops, how is it that this ideal concerning Gregorian chant has not been realized in the church?” Archbishop Sample asked. “Far from enjoying a ‘pride of place’ in the church’s sacred liturgy, one rarely if ever hears Gregorian chant. This is a situation which must be rectified.”

Popular sacred music from many cultures is part of the church’s treasury of music, the archbishop wrote, adding that he does not mean pop culture.

“Any composition of sacred music, even one which reflects the unique culture of a particular region, would still be easily recognized as having a sacred character,” he said. Holiness, he concluded, “is a universal principle that transcends culture.”

The pastoral’s guidelines include a call for a sung Mass at every parish. Musicians should never draw too much attention to themselves or seek applause, the archbishop wrote.

The pastoral said every western Oregon parish is asked to learn English plainchant settings found in the Roman Missal and should establish a least a small repertoire of Latin Gregorian chants for Mass parts.

Hymns are more proper for the Liturgy of the Hours than Mass, Archbishop Sample wrote. Singing hymns for entrance, offertory and Communion means omitting some of the Mass chants provided by the church for those moments. But singing sacred hymns in place of the chants is permissible for pastoral reasons, he added.

“Hymn and song texts must conform to the teachings and doctrines of the church, especially with regard to the eucharistic sacrifice and the real presence of Christ in the Eucharist. Any texts which promote teachings which are ambiguous or contrary to the faith are not to be used and must be retired from the parish repertoire,” Archbishop Sample wrote.

The archbishop thanked and lauded musicians who labored after Vatican II to help renew sacred liturgy and acknowledged that his letter will create a difficult shift for some of them.

Guidelines set out in the letter should be integrated into the life of parishes, missions and schools in the Archdiocese of Portland, the archbishop said.

“I am very excited about Archbishop Sample’s pastoral letter on sacred music,” said Msgr. Gerard O’Connor, director of divine worship for the archdiocese. “It is an excellent document, written with a realistic view of the current pastoral situation in light of an objective look at what the church teaches and promotes with regard to sacred music.”

The letter promotes “a Vatican II vision of music in the liturgy,” Msgr. O’Connor told the Catholic Sentinel, Portland’s archdiocesan newspaper. “It brings to the forefront the Vatican II vision that Sunday Mass should be sung and not that we should just place three or four hymns throughout the Mass.”

The letter has created a buzz among church musicians across the country.

“We share Archbishop Sample’s concern and passion for the quality and beauty of the liturgy,” said Wade Wisler, publisher of Portland-based Oregon Catholic Press, the largest U.S. producer of Catholic liturgical music. “We invest enormous resources on that, helping parishes to prepare and celebrate rich, beautiful, inspiring liturgies that conform to the mind of the church and encourage the ‘full, conscious and active participation’ of the faithful.”

Archbishop Sample is chairman of the board for OCP, which serves dioceses all over the world and includes music with influences from Latin America and Asia.

The Archdiocese of Omaha, Nebraska, recently created a tradition-minded core repertoire of worship music for Mass and OCP had more titles on the list than any other publisher. Wisler said that songs considered for addition to OCP missals go out to a committee of theologians for re-view to make sure they abide by church documents and guidelines.

The letter on music comes almost eight months after Archbishop Sample published a 385-page liturgical handbook for the Archdiocese of Portland, seeking to increase mystery, reverence and awe in Mass.

The handbook asks for opening churches at least part of each day for public prayer; replacing Communion services with Liturgy of the Hours; ending hand-holding during the Our Father; avoiding liturgical dance; and preventing overly long and loud sessions for the sign of peace.

It also asks extraordinary ministers of holy Communion to wait outside the sanctuary until the priest has consumed Communion from the chalice and calls on Catholics to keep Sundays free for quiet and meditation.

PREVIOUS: Indiana parish opens ‘Blessing Box’ as a gift to people in need

NEXT: Survivor: ‘Jesus is light that shows us way’ to stop sexual exploitation