Congress urged to make the poor a priority for next stimulus 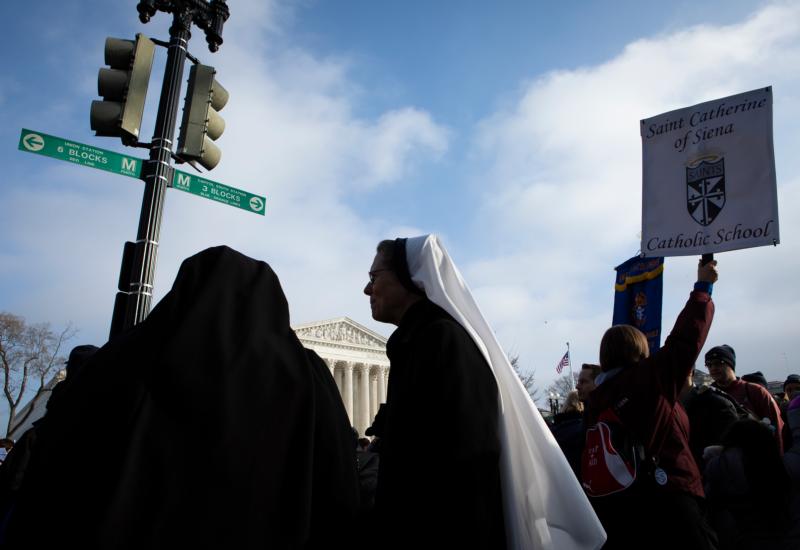 A woman religious is seen near the U.S. Supreme Court during the annual March for Life in Washington Jan. 18, 2019. The U.S. Supreme Court received an emergency request in late January to put on hold a Louisiana restriction on abortion providers. (CNS photo/Tyler Orsburn)

The law, which was set to take effect Feb. 4, requires doctors who perform abortions to have admitting privileges at a hospital within 30 miles radius of their clinic.

Late Feb. 1, the court announced it would temporarily keep the state’s law on hold until Feb. 7.

In a brief order, Justice Samuel Alito said the justices needed more time to review the documentation on arguments for and against the law, Louisiana’s Unsafe Abortion Protection Act, which requires doctors at abortion clinics to have admitting privileges at a nearby hospital.

It sounds familiar because three years ago the Supreme Court struck down similar legislation in Texas, saying the admitting-privileges requirement and other standards put on abortion clinics “provides few, if any, health benefits for women, poses a substantial obstacle to women seeking abortions, and constitutes an ‘undue burden’ on their constitutional right to do so.”

If the court takes up the Louisiana law it could come up with an entirely different decision based on the makeup of the current court, now with two justices on the bench appointed by President Donald Trump: Justices Neil Gorsuch and Brett Kavanaugh.

Both sides on the abortion debate will be playing close attention to what the court does: If it sticks to its own precedent or not.

In defending its requirement for abortion providers — supported 2-1 by the U.S. Court of Appeals for the 5th Circuit — the state of Louisiana says its law would not have the impact that similar legislation would have had in Texas, mainly because there is no evidence that an abortion clinic would close in Louisiana as the result of the law.

A Louisiana abortion provider, June Medical Services, which objects to the law, appealed to the full 5th Circuit in mid-January to rehear the case, but the judges voted 9-6 against doing so. Now the group plans to appeal the decision to the Supreme Court, but while it does, it has asked the court to stop the law from being enforced.

Rachel Morrison, counsel for Americans United for Life, a pro-life advocacy group in Washington, said that for the Supreme Court to put this law on hold while the case is being appealed, there must be a “reasonable probability” that the court will agree to take the case and ultimately find the law unconstitutional.

The request for the stay was presented to Justice Alito, the justice in charge of emergency requests from the 5th Circuit. Morrison said Alito could make the decision himself or refer it to the full court. She wrote on the group’s website: “We expect that Justice Alito will ask all of the justices to weigh in and that the court’s final decision regarding the emergency request will come out before February 4th.”

After the Supreme Court’s 2016 ruling that struck down required hospital admitting privileges, similar policies have been struck down or unenforced in Alabama, Mississippi, Oklahoma, Tennessee and Wisconsin. Currently Missouri, North Dakota and Utah have such a law.