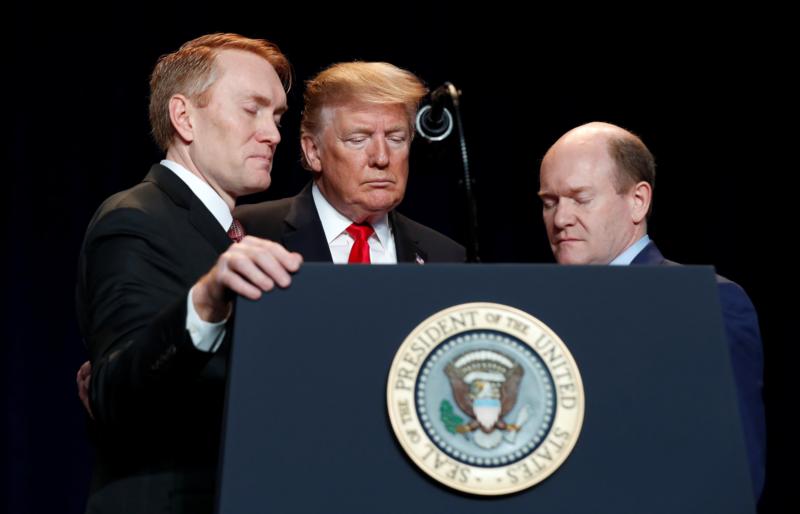 “We will always protect our country’s proud tradition of faith-based adoption,” Trump said. “My administration is working to ensure that faith-based adoption agencies are able to help vulnerable children find their forever families while following their deeply held beliefs.”

His comments came after introducing Melissa and Chad Buck, a Catholic couple from Holt, Michigan, who have adopted five children with special needs through St. Vincent Catholic Charities in the Diocese of Lansing. Two of the Holts’ children — Max, 10, and Liz, 9 – joined the couple at the breakfast.

Trump alluded to an American Civil Liberties Union federal lawsuit against the Michigan Department of Health and Human Services that challenges a state law that protects child-placing agencies that deny adoption services because of a conflict with the agency’s religious beliefs.

Under Catholic teaching, St. Vincent Catholic Charities does not place children with same-sex couples. It is among the agencies contracted for adoption services by the state of Michigan.

Applauding throughout the breakfast, the audience reserved its longest ovation for Trump’s pledge to upholds its pro-life policies toward unborn children.

“As part of our commitment to building a just and loving society, we must build a culture that cherishes the dignity and sanctity of innocent human life. All children, born and unborn, are made in the holy image of God,” he said.

Trump pledged to continue efforts to crack down on human trafficking by working with faith-based agencies working on the frontline to protect vulnerable men, women and children.

“Together we will end the scourge of modern-day slavery, which because of the internet is at levels nobody can believe, the president added.

“Let us pray therefore for the good our out people, for the strength of our families for the safety of our citizens, for the fulfillment of our deepest hopes and our highest potential. And let us always give thanks of the miracle of life, the majesty of creation and the grace of almighty God.”