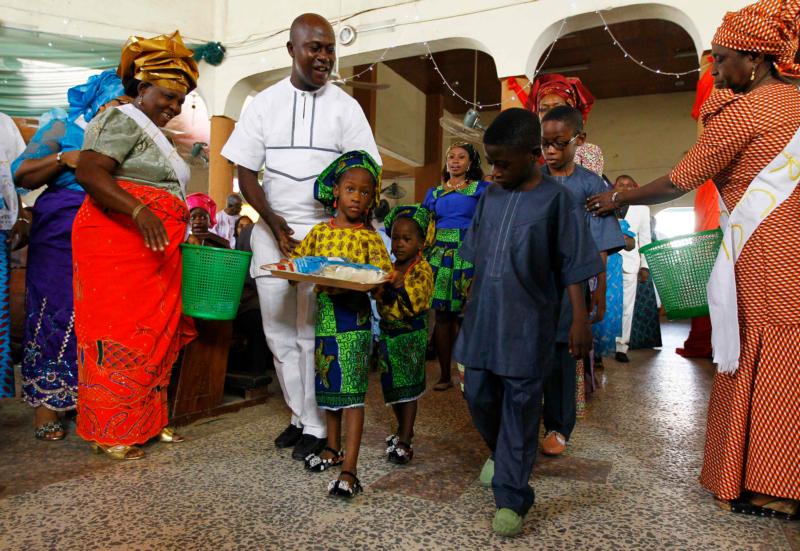 A family walks with gifts toward the altar during a New Year’s Mass of thanksgiving at Holy Rosary Church in Abuja, Nigeria, Jan. 1, 2014. When child sexual abuse scandals involving Catholic priests emerge in Africa, they do not draw a frenzied reaction similar to that witnessed in developed countries, but the continent’s church is affected, said Catholic leaders.(CNS photo/Afolabi Sotunde, Reuters)

NAIROBI, Kenya (CNS) — When child sexual abuse scandals involving Catholic priests emerge in Africa, they do not draw a frenzied reaction similar to that witnessed in developed countries, but the continent’s church is affected, said Catholic leaders.

While there is a general view that the scandals are a challenge of the church in Europe and America, African officials confirm the incidents, amid reports of some provinces expelling or defrocking priests.

In Africa, clerics view the issue as too delicate and sensitive for the public, and many remained tight-lipped on the subject. At the same time, the church leaders said they were concerned about the abuses and closely follow any such reports, both locally and globally.

“Africa is also affected like any other continent, but to what extent, I am not sure,” Precious Blood Sister Hermenegild Makoro, general secretary of the Southern African Catholic Bishops’ Conference, told Catholic News Service.

In October, the South African church defrocked three priests over sexual abuse of children in the parishes. Since 2003, 35 cases of abuse involving priests have been reported to the church in South Africa.

Sister Makoro said out of the 35 cases, only seven were being investigated by the police, and one has led to a life sentence.

Some sources — including former priests and seminarians — say some women and Catholic sisters may be victims of the abuses, but Sister Makoro told Catholic News Service in mid-January that the National Professional Conduct Committee of the Southern African Catholic Bishops’ Conference had not received any complaints so far.

Father Christian Anyanwu, director of social communication of the Catholic Secretariat of Nigeria, said cases of child abuses were not pronounced in the country when compared to Europe and America.

However, he noted that the church is a single family, and whatever happens to one anywhere is bound to affect others.

“There are measures being put in place by the (Nigerian) church to ensure that we avoid the mistakes that have been made in Europe and America with regard to child abuse,” said Father Anyanwu.

In Kenya, Father Joachim Omolo Ouko, an Apostle of Jesus priest in the Archdiocese of Kisumu, agreed that cases of sexual abuse had also occurred in Africa, but few were reported.

“I think the cover-up is very strong,” said Father Ouko.

The Rev. Peter Njogu, a former Catholic priest who left the Catholic Church to start his own church, said more cases had come into the open in the developed world because people were more independent in their faith.

“I think there could be more cases in Africa, but most go unreported because of fear. A Christian family may know a priest abusing a child, but they keep quiet because they fear the institution. I would say it is a colonial mentality; fear of institutionalized religion. Concrete and internalized religion is what is missing,” said Rev. Njogu, who heads his Renewed Universal Catholic Church as its archbishop. He alleged there was evidence that some errant priests were getting involved in young families and breaking up marriages.

He claimed since priests started leaving the Catholic Church to join churches started by rebel priests, the Kenyan church has been cautious about disciplining errant priests.

In the Tanzanian Diocese of Bukoba, Father Chrisantus Ndaga said while sexual abuse is a universal problem in the church, the difference in Africa was media coverage and societal perception.

“Some case may be similar to those in other parts of the world, but here it is seen as a societal and a family problem. When it occurs, some families may not want it to go public,” said Father Ndaga.

Archbishop Baptist John Odama of Gulu, Uganda, former president of the Ugandan bishops’ conference, calls the abuses a crime against children and the failure of humanity.

“Its human weakness … a failure of humanity to protect its own fruits,” said Archbishop Odama. “We must understand it first, start separating the sectors to see where it is occurring, then look for remedies. If we don’t understand it, we will be making a failure.”

Clerical abuses are of great concern to the rapidly growing African church; analysts say growth is making the continent the future of Catholicism.

Vatican statistics indicate the African Catholic population increased by 19.4 percent from 2010 to 2015. Beyond the statistics, the church is also vibrant, playing a key role in the lives of Catholics.

Recently, some African bishops’ conferences have responded by publishing guidelines to help them deal with the abuses.

The Nigerian conference published “Guidelines for Processing Cases of Sexual Abuse of Minors and Vulnerable Adults” in 2017.

“It is implemented in all the 56 dioceses in the Nigerian church. The document specifies what needs to be done in case of child abuse,” said Father Anyanwu.

Father Ndaga said child protection was vital, and every institution should develop policies that safeguard and protect children.

“It’s a gradual process and I think it’s ongoing,” said the former official of the Association of Member Episcopal Conferences in Eastern Africa.

Meanwhile, as the scandals continue, Pope Francis has called to the Vatican heads the world’s bishops conferences to discuss how to protect minors and vulnerable people in the church. The meeting is scheduled Feb. 21-24.

Father Ouko said many in the church are hoping that Pope Francis will give some guidelines that bar bishops and other church leaders covering up when such cases are reported.

“I think there should be some punishment for those who are involved in the cover-up,” he said.