Ahead of abuse summit, survivor says church is on borrowed time 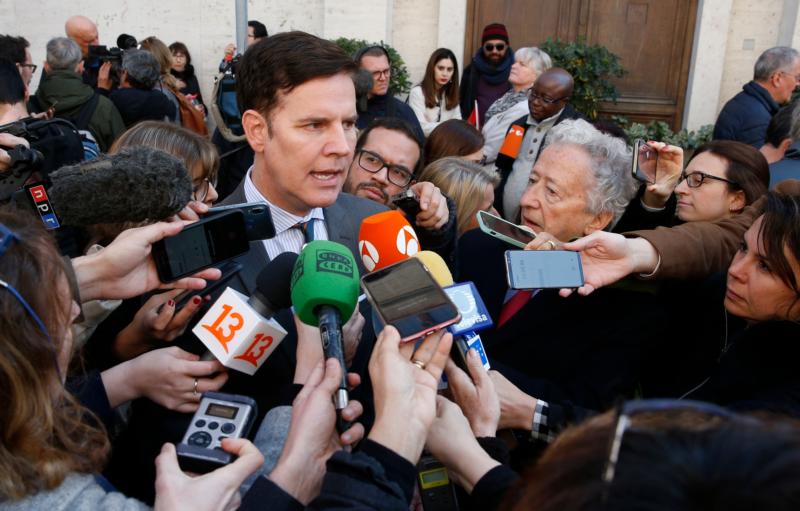 Juan Carlos Cruz, a victim of clergy sexual abuse in Chile, speaks with journalists near the Vatican in Rome Feb. 20, 2019. (CNS photo/Paul Haring)

VATICAN CITY (CNS) — On the eve of a major summit on the abuse crisis in the Catholic Church, survivors said concrete action, not words, must be made to restore the trust of those who have suffered at the hands of members of the clergy.

Speaking to journalists outside the Vatican Feb. 20, Juan Carlos Cruz, a Chilean survivor of abuse, said he hoped the summit meeting on the protection of minors would bring about “radical change” in to how the church handles cases of abuse of children and vulnerable adults.

“We need to do this now,” Cruz said. “The church is on borrowed time.”

Twelve representatives of survivors’ groups from around the world, including Cruz, met Feb. 20 with the organizing committee of the Feb. 21-24 summit, which was to bring together almost 190 church leaders: the presidents of national bishops’ conferences, the heads of the Eastern Catholic churches, superiors of religious orders of men and women, Roman Curia officials and invited experts and guest speakers.

“The members of the committee are very grateful to the victims who participated for their sincerity, the depth and the strength of their testimonies, which will certainly help them to always better understand the gravity and urgency of the difficulties that they will confront during the course of the meeting,” said Alessandro Gisotti, interim Vatican spokesman, after the meeting.

The organizing committee included Cardinal Blase J. Cupich of Chicago, Archbishop Charles Scicluna of Malta, who handles abuse cases as adjunct secretary of the Congregation for the Doctrine of the Faith, and Jesuit Father Federico Lombardi, the moderator of the summit.

Father Lombardi told Catholic News Service that the purpose of the meeting with survivor groups was “to listen to them so that they could openly say what they expect, what their sufferings are and what their expectations for action are.”

However, after the meeting, Peter Isely, a survivor and founding member of the Survivors Network of those Abused by Priests, also known as SNAP, said that “not just survivors but people everywhere” are demanding zero tolerance of abuse in the church.

Survivors, he said, want the pope to write zero tolerance “into universal church law: zero tolerance for the cover-up of bishops.” The pope must “do it right now.”

Isely also expressed disappointment that the pope did not meet with survivors immediately before the summit.

“We’re here in Rome right now, all of these wonderful advocates, activists, survivors, we’re here right now,” he said. “And if he can meet with all those bishops over there so they can talk about what sexual abuse is, he can come and meet with us because we’ll tell him what it is.”

Father Lombardi told CNS however, that “the pope has met with many, many survivors in his pontificate” and that while he understood the groups’ concerns, “the invitation we made was not (to arrange) a meeting with the pope but for a meeting with us, with the organizers” of the summit.

While some survivors were spending more than two hours with the organizers, other survivors from around the world waited outside and spoke with journalists about the suffering they endured and their hopes for the summit.

Juan Jose Bayas from Guayaquil, Ecuador, waited near St. Peter’s Square holding his country’s flag. He was the first to denounce abuses committed by former priest Luis Fernando Intriago, who founded the Christian Life Movement, an offshoot of the Sodalitium Christianae Vitae, in Ecuador. The founder of Sodalitium, Luis Fernando Figari, stands accused of sexual, physical and psychological abuse of minors and young adults in the group.

Intriago, who was laicized by the Vatican in July 2018, is accused of having abused at least 10 adolescents in his parish in Guayaquil beginning about a dozen years ago. The young men reported that the priest told them to strip naked or to their underwear and that he tied them with ropes and blindfolded them, dragged them across the floor, hung them from bars or administered electric shocks in a practice he called “the dynamic of sin.”

“In my case, for example, (the Vatican) took away the priesthood from Luis Fernando Intriago. But why doesn’t the Vatican give me those documents so that I can give it to the prosecutor’s office and he can be judged like any other person,” Bayas told CNS. “We are talking about half-hearted words and not concrete” solutions being offered to victims.

Bayas told CNS that he hopes Pope Francis will encourage bishops to protect victims and help provide legal assistance for them. He also said he wants the pope to enforce zero tolerance of abusers and bishops who covered up cases of abuse.

“If we’re going to speak about zero tolerance, then let’s talk about exposing these criminals or investigating those who are suspected of abuse,” Bayas said. “That is what true justice means, that is the true culture of love of Christ that (the church) speaks so much about.”

NEXT: Bishops must protect their flock from abuse at all costs, archbishop says