‘Cardinal virtue’ of justice must be protected, pope tells judges 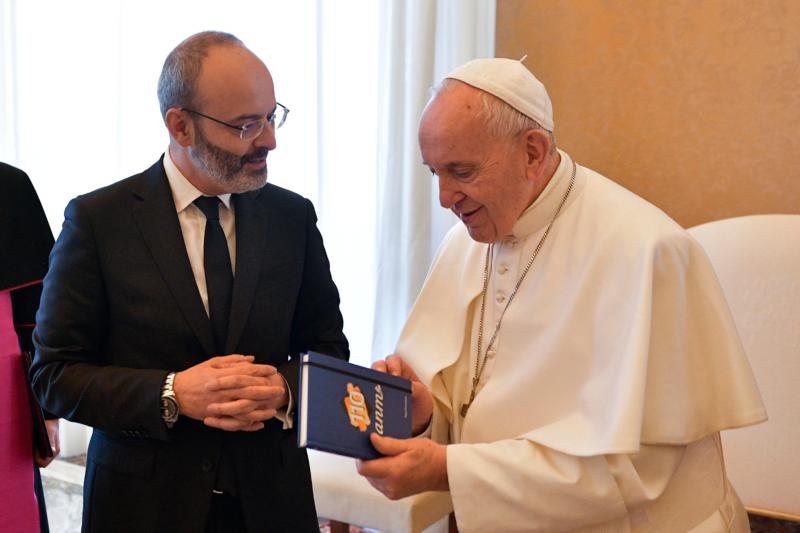 Pope Francis accepts a book during a meeting with members of the Italian National Association of Judges at the Vatican Feb. 9. 2019. (CNS photo/Vatican Media)

VATICAN CITY (CNS) — Justice, along with prudence, fortitude and temperance, is a virtue that must be defended for the good of society, Pope Francis told a group of Italian judges.

A world without justice risks weakening the very fabric of society and can transform it into “a breeding ground for illegality,” the pope said Feb. 9 during a meeting with the Italian National Association of Judges.

“Without justice, all social life remains jammed, like a door that can no longer open or ends up screeching and creaking in a cumbersome movement,” he said.

According to its website, the association, which was founded in 1909, is comprised of more than 8,300 Italian judges and is dedicated to protecting “the constitutional values, independence and autonomy of the judiciary.”

Francesco Minisci, president of the association, praised the pope for his defense of “justice, solidarity, the fight against corruption, the mission and the exercise of mercy.”

Commemorating the organization’s 100th anniversary, Minisci emphasized its commitment to defending the Italian judiciary despite difficulties and tragedies, including the deaths of 28 Italian judges “who were killed by criminals while performing their duty.”

“In this context, we not only must fight the mafias and the forms of organized crime, which are among the most aggressive in the world, but also the malpractice and corruption of the public administration which are among the major evils within Italian society,” Minisci said.

In his speech, the pope emphasized the need for judges to continue to “affirm the superiority of reality over the idea” at a time when “truth is so often falsified and we are almost overwhelmed by a vortex of fleeting information.”

“Your commitment to ascertaining the reality of the facts, even if made more difficult by the amount of work entrusted to you, should therefore always be timely, accurately reported, based on in-depth study and a continuous effort to update” their findings, he said.

Pope Francis encouraged the Italian judges to be merciful when administering justice, saying, “your gaze on those you are called to judge should always be a gaze of goodness.”

“May the justice that you administer become ever more ‘inclusive,’ attentive to the least of these and their integration (in society). In fact, in giving everyone their due, the extreme weakness in the lives of so many, which influences their choices, cannot be forgotten,” the pope said.