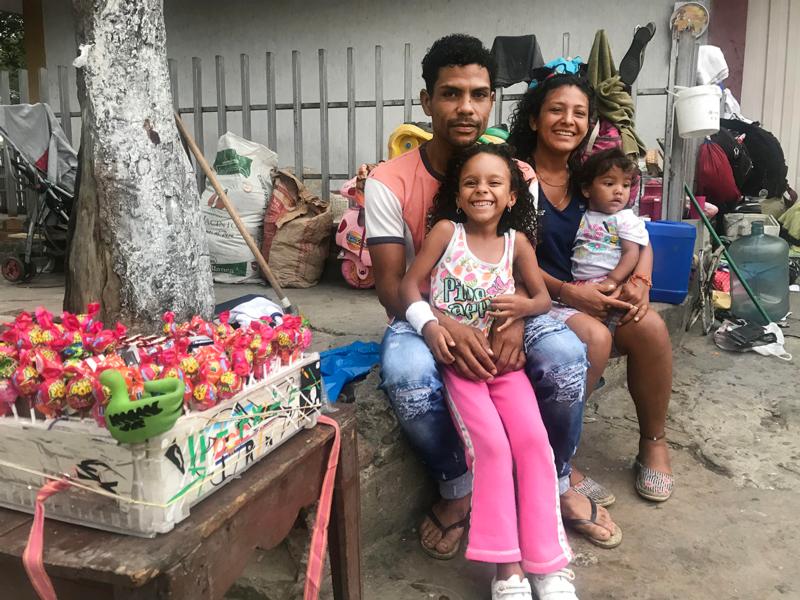 Venezuelan Roberto Sanchez, his wife and two young daughters pose for a photo in Cucuta, Colombia Feb. 9, 2019. The family lived at a Catholic-run shelter for the first two weeks, then moved out, only to be evicted by their landlord. Now they are living in the street and sell sweets to make a living, while they save up to rent a new place. (CNS photo/Manuel Rueda)

By 10:30 a.m., hundreds of Venezuelan migrants and refugees were seated under a white tarp to receive a basic meal, while hundreds more stood outside and waited in line under the punishing tropical sun.

The crowds of hungry Venezuelans seeking a free meal become bigger each month, as thousands of people flee food shortages, hyperinflation and crime in the South American country, with almost no savings to start their new life abroad. Organizers worry that the situation could get worse if Venezuela’s president does not let humanitarian aid into the country.

“We can give the ones who have moved here a hand,” said Natalia Ruiz, the soup kitchen’s deputy manager and a member of Yeshua, a Colombian biblical school. “But what about the people who are still in Venezuela? There is little food and medicine there and a lot of despair.”

For the past few years, church groups have been calling on Venezuelan President Nicolas Maduro to let humanitarian aid into the country, in order to relieve the suffering of millions of vulnerable Venezuelans. But the socialist leader has long rejected help from abroad, arguing that it will be used to meddle in the country’s affairs.

The debate over aid to Venezuela was reignited in February as the Venezuelan opposition and the U.S. government partnered to deliver help to the South American nation and stored several tons of nonperishable food and medicine in a Colombian warehouse across the border from Venezuela.

Maduro has vowed to not let the aid in, saying it is part of a calculated move to boost Venezuela’s opposition and prepare an invasion of his country. Instead, he urged the U.S. to drop recently imposed sanctions on Venezuelan oil exports, which could cost his government up to $11 billion over the next 12 months, making it more difficult to import food into the country.

The Venezuelan bishops’ conference replied by urging Maduro to let the aid in for the sake of the its most vulnerable people and said that, through its charitable agency Caritas, it could help to oversee the neutral and nonpolitical distribution of these goods.

“We urge the government to concede a permit for aid to get in, as a way to mitigate the current impact of the economic crisis,” the bishops’ conference said in a statement.

In an interview with a local radio program, Judith Marquez, director of Caritas Venezuela, said that allowing aid into the country “will not bring more problems” to Venezuela, adding that currently 250,000 children in the country are suffering from malnutrition.

In Colombia, Catholic charities are doing as much as they can to help Venezuelans who cross into the country for medicine, food and work.

The Divine Providence soup kitchen in Cucuta now provides around 4,000 free meals per day to migrants and refugees, four times as many as when it opened in 2017.

Enyerli Castellanos, a manicurist who moved to Colombia eight months ago, said the free meals of rice, chicken and beans were of great help to her and her 2-year-old son. Her husband works at a bus station selling tickets and has an unreliable income that is based only on small commissions. The family of three pays around $3 each night to rent a room they share with a young Venezuelan couple.

“We have no savings, and we survive from whatever we can make each day,” Castellanos said.

Roberto Sanchez, 31, moved to Colombia a month ago with his wife and two young daughters and said that, during his first two weeks in the country, he was able to get free housing at a shelter run by Scalabrinian missionaries.

Sanchez left the shelter after he had made some money selling candy and cigarettes in the streets and was able to pay $40 to rent a room for his family for two weeks. But he was cheated and expelled by his landlord and is now sleeping in the streets, until the family can gather some more money to rent another place.

The Scalabrinian shelter, designed for 120 people, is now housing approximately 150 migrants, so Sanchez and his family cannot return there.

He explained that while migrating was no walk in the park, he preferred to stick it out in Colombia, where his current income at least enables him to feed his family properly.

“My daughter is 18 months old,” he said. “While we were in Venezuela, I could not afford medicines for her or even baby formula.”

Bishop Victor Ochoa Cadavid of Cucuta has refrained from making any statements on whether Venezuela should accept aid. However, he said his diocese is working to increase assistance to Venezuelan migrants, through soup kitchens located in eight different parishes.

NEXT: Caritas reps from Latin America look for ways to build on ‘Laudato Si”