Following unrest in Haiti, CRS weighs how best to ramp up services 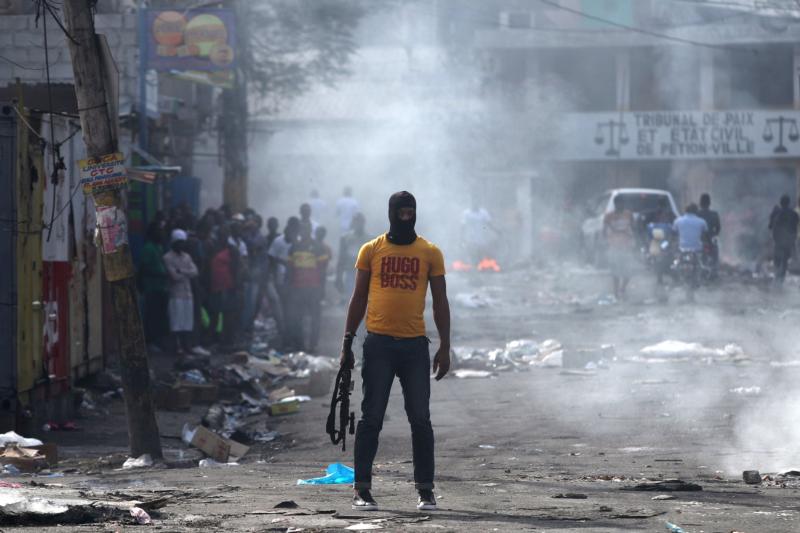 A man holds a weapon next to burning barricades during anti-government protests in Port-au-Prince, Haiti, Feb. 17, 2019. (CNS photo/Ivan Alvarado, Reuters)

“Today we started on time,” Christopher Bessey, CRS country representative in Haiti, told Catholic News Service Feb. 19 from his office in the Haitian capital, Port-au-Prince. “It was a really good sign. I thought that all indicators were that this was going to be the case for some time to come.”

All but four of the agency’s non-Haitian staff left the Caribbean nation following onset of violent protests Feb. 7, Bessey said. He was unsure when they would be able to return.

“Our focus will be in looking how to bring back staff who left the country as soon as feasible and as soon as we’re somewhat certain that they will be able to come back without having to leave again,” Bessey said.

CRS also employs about 250 Haitians in three offices throughout the country. They were assessing the situation in various locales to determine how soon they could resume full operations.

“We’re making sure it’s safe to get out to the field,” he said.

Demanding the ouster of Haitian President Jovenal Moise, protesters shut down the capital and other cities for more than a week by blocking roads with burning tires, cinder blocks and makeshift fencing. Police clashed with protesters, leading to at least nine deaths.

The protests were the latest in a series against the Moise administration and the wider government.

Warnings against traveling to Haiti by the governments of the United States and Canada remained in place Feb. 19 despite a tense calm across the country.

Demonstrations erupted in July over a 40 percent hike in fuel prices. A 2017 report by the Haitian Senate alleged that dozens of government officials and corporate officials embezzled $2 billion from Petrocaribe, a reduced-price oil aid program offered by Venezuela to several Caribbean nations. Funds under the program were designated for health, education and social programs as well as infrastructure development.

Haitians’ anger also has been fueled by a social media campaign accusing several presidential administrations of misappropriating billions of dollars in aid since the country’s devastating January 2010 earthquake.

In the meantime, Haiti’s currency, the gourde, has been weakened, making the cost of goods more expensive. Other than food, Haiti must import nearly all basic commodities.

Bessey said CRS has joined other nongovernmental agencies in working to strengthen the Haitian government’s ability to respond to the country’s high rate of poverty let alone any natural disasters that occur. The NGOs also are working with families to boost resiliency during a time of high inflation and normally difficult living conditions.

Investments in small enterprises that meet local needs and are not as susceptible to outside economic forces also are underway, he said.

Such efforts, he explained, will allow families and individuals to “bounce back in a more sustainable way.”

NEXT: To know God is to know love, pope says at audience