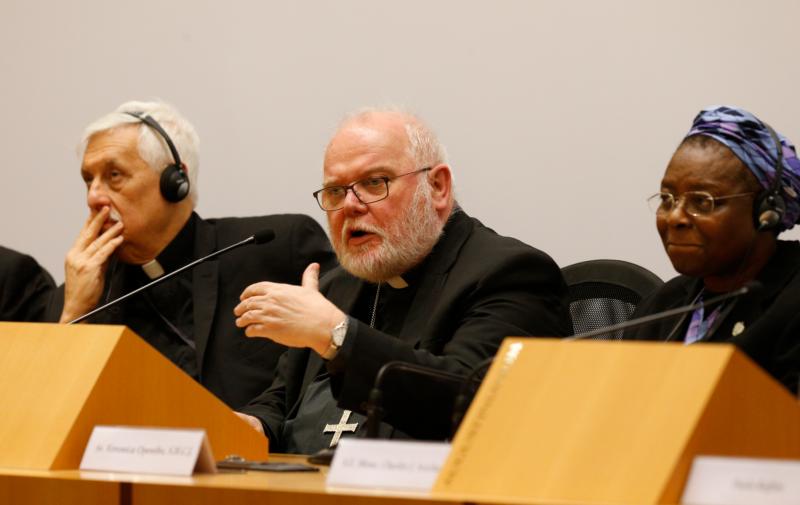 Cardinal Reinhard Marx of Munich speaks at a briefing on the third day of the meeting on the protection of minors in the church at the Vatican Feb. 23, 2019. Also pictured are Father Arturo Sosa Abascal, superior general of the Society of Jesus, and Nigerian Sister Veronica Openibo, congregational leader of the Society of the Holy Child Jesus. (CNS photo/Paul Haring)

“There are no alternatives to traceability and transparency,” he said, adding that he saw no convincing reason why the “pontifical secret” should apply “to the prosecution of criminal offenses concerning the abuse of minors.”

“It is not transparency which damages the church, but rather the acts of abuse committed, the lack of transparency or the ensuing cover-up,” he said.

Cardinal Marx, who is president of the German bishops’ conference, a papal adviser on the Council of Cardinals and coordinator of the Vatican’s Secretariat for the Economy, spoke Feb. 23 at the Vatican summit on child protection about the need for transparency in “a community of believers.”

Noting his German nation’s tendency to rely heavily on rules and bureaucracy, the cardinal said making use of the administrative world of facts and files does not diminish a faith community’s mission of serving people and their needs with love and mercy.

Rather, a properly functioning system of administration helps the church fulfill its mission effectively, reliably, objectively and humanely, he said, and it serves as “an important building block” in addressing and preventing many forms of abuse, including financial misdeeds.

Transparent administration — whose clear rules, procedures and sanctions all serve justice — acts as “a counterweight to what can be commonly described as the sinfulness of humanity,” he said.

However, the power of rules and regulations can be misused, he said, and “the sexual abuse of children and youths is in no small measure due to the abuse of power in the area of administration.”

The abuse of administrative power has obscured, discredited and made the church’s mission “impossible,” he said. One example of how it hurts mission, he said, can be seen with what an abuse victim once wrote him, “If the church claims to act in the name of Jesus, yet I am treated so badly by the church or its administration, then I would also like to have nothing to do with this Jesus.”

“Files that could have documented the terrible deeds and named those responsible were destroyed or not even created,” Cardinal Marx said.

“Instead of the perpetrators, the victims were regulated, and silence imposed on them,” he said. Adding that “the rights of victims were effectively trampled underfoot and left to the whims of individuals.”

The cardinal outlined what is required so that administration in the church is not only an important tool, but also “a symbol” that brings people together, lets them be heard and feel respected, and brings them closer to God — in essence, “the theological mission of church administration.”

Key things that should begin “immediately,” the cardinal said, included:

— Define the goal and limits of pontifical secrecy and redefine confidentiality and secrecy, distinguishing them from “data protection,” otherwise, “we either squander the chance to maintain a level of self-determination regarding information or we expose ourselves to the suspicion of covering up.”

— Publicly release statistics on the number and details of abuse cases “as far as possible and according also to the law of the state,” he said. “Institutional mistrust leads to conspiracy theories” and “myths” about an organization, which can be avoided “if the facts are set out transparently.”

“Transparency does not mean the uncritical acceptance and undisciplined dissemination of abuse allegations,” he said. But the church needs “a transparent process, which clarifies and specifies the allegations and follows generally accepted standards regarding when and how the public, the authorities and the Roman Curia should be informed.”

— Publish judicial proceedings since legal proceedings serve to establish the truth. “People in the church also have to see how did this judge come to this sentence? What is the sentence? All is, nearly all is, secret,” which is “not good.”

Outside experts can help the church build traceability and transparency into its procedures, Cardinal Marx said. But what is decisive in making it all work is people’s attitudes — those “who work in administration and those responsible for it.”

NEXT: Secrecy must ‘go out the window,’ Irish archbishop says