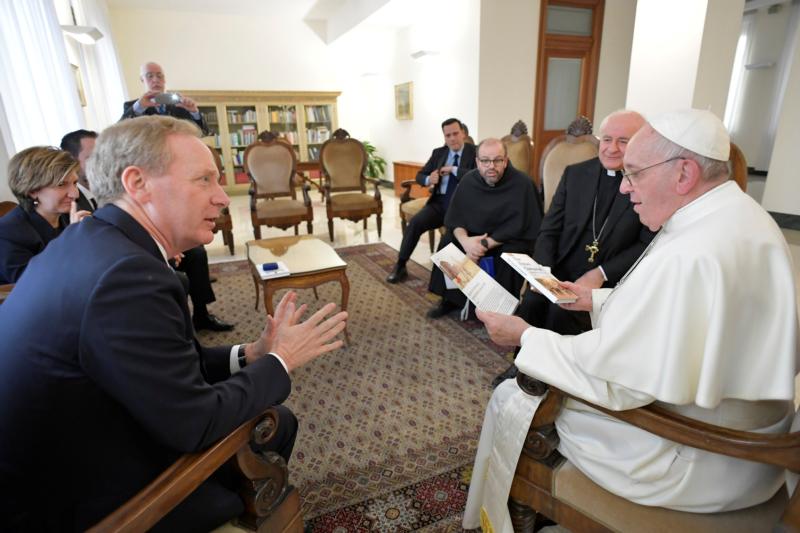 VATICAN CITY (CNS) — The president of Microsoft, Brad Smith, told Pope Francis that a “human voice” was needed to speak up in the world of technology today.

“A human voice like that of the church” with its values and authority, he said, telling the pope, “We appreciate your voice. We really feel this is a critical moment in time.”

Smith and a delegation from the U.S.-based technology company met with the pope Feb. 13 to discuss the centrality of the human person and the need for ethics in artificial intelligence.

During the 30-minute meeting in the lobby of the pope’s residence, Smith “discussed the topic of artificial intelligence at the service of the common good and activities aimed at bridging the digital divide that still persists at the global level,” Alessandro Gisotti, interim director of the Vatican press office, told reporters in a communique.

Smith and the president of the Pontifical Academy for Life, Archbishop Vincenzo Paglia, also told the pope that they will be sponsoring an award for the best doctoral dissertation addressing artificial intelligence and ethics.

The winner also will be invited to present his or her thesis at the academy’s general assembly in Rome in February 2020. Smith said he, too, would attend the academy’s meeting, which will be dedicated to the topic of artificial intelligence.

In a statement released by the pontifical academy, Smith said that he appreciated the “instructive and deep discussion” he was able to have with the pope and Vatican officials concerning the challenges and opportunities that new technologies and AI present.

“We were all impressed by the pope’s curiosity and energy,” and looked forward to what would come out of their “fruitful dialogue,” he said.

“At Microsoft, we are convinced that technological progress can increase the possibilities of unlocking solutions to some of the greatest challenges in the world,” but, he added, those new avenues also require thinking about ethical guidelines.

In an interview with the Vatican newspaper, L’Osservatore Romano, Smith said every instrument can become a weapon in the wrong hands if people are unable to come together and keep pace with technology.

“We need strong ethical principles, new evolved laws, people educated with new skills and even reform in the labor market,” he said.

Technology must always be at the service of people, helping “increase the potential of every person on earth,” he said.

NEXT: Pope calls on world leaders to eradicate poverty, hunger