Stop threatening priests or ‘deal with me,’ says Philippine president 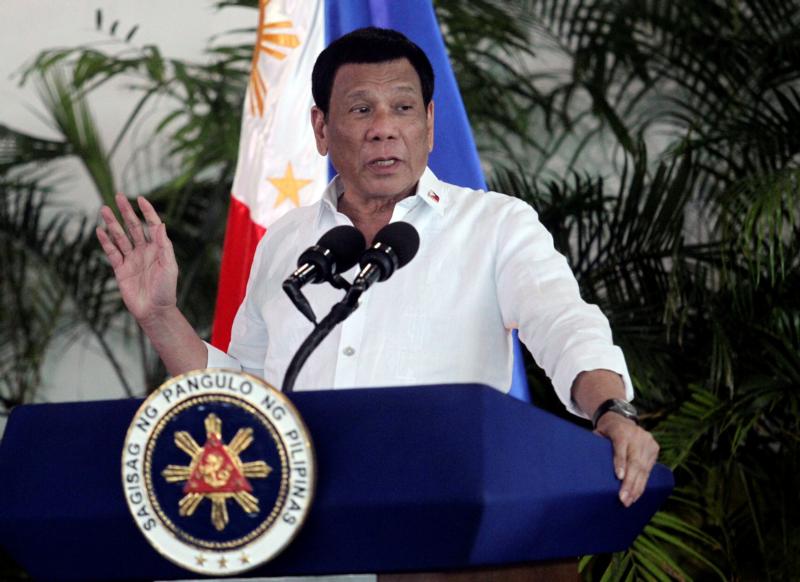 After calling the country’s Catholic bishops “useless fools” who should be killed, Philippine President Rodrigo Duterte has now warned against harming priests and prelates. Duterte is pictured in a Sept. 8, 2018, photo. (CNS photo/Lean Daval Jr., Reuters)

MANILA, Philippines (CNS) — After calling the country’s Catholic bishops “useless fools” who should be “killed,” Philippine President Rodrigo Duterte has now warned anyone against harming priests and prelates.

The president made the warning after being told that people close to his family have threatened bishops and priests critical of his administration’s policies, reported ucanews.com.

“Lay off! Stop threatening them or you’ll have to deal with me,” the president said in a speech before a political gathering in the central Philippines Feb. 24.

On Feb. 26, Bishop Pablo Virgilio David of Kalookan confirmed in an interview that he has received death threats over the past two weeks.

“I have been receiving them, but I do not know who they are from,” said the bishop, whose diocese has become known as a “killing field” of suspected drug users and dealers.

Human rights groups estimate that, since 2016, more than 20,000 people have died in Duterte’s “total war” against illegal drugs.

When asked if he thought the threats to his life had something to do with his criticism of the anti-narcotics campaign, Bishop David said, “Your guess is as good as mine.”

Despite the threats, the bishop said he is not planning to limit his movements, although he said he would “also watch my back.”

“No threat or intimidation can stop me from carrying on with my spiritual and pastoral duties as a bishop,” he said.

“We draw strength and courage from God through prayer and discernment,” said Bishop David. “I get spiritual support from a whole army of contemplatives serving as my prayer partners.”

Duterte earlier said he had received a message from Cardinal Luis Antonio Tagle of Manila expressing concern over threats against members of the clergy.

In his message, Cardinal Tagle told the president, “Some priests received death threats from someone claiming to be working for the president’s family.”

“Just to let you know, somebody might be trying to destroy you. Thanks, we pray,” Duterte quoted the cardinal as saying in his message.

“Once you touch nuns, priests, or imams — don’t harm them. Those are religious people. You know them, we’ll have an encounter. They are not involved,” said the president.

Father Jerome Secillano of the public affairs committee of the bishops’ conference, said: “We need to determine if indeed there are groups out to harm members of the clergy. If there are, what can they get out of it? The least they can do is to eliminate voices of dissent and criticism.”

In December, Duterte said Catholic bishops were “useless fools” who do nothing but criticize his administration.

He described the Catholic Church as “the most hypocritical institution.”