Territory is life, life is territory: what indigenous want church to know 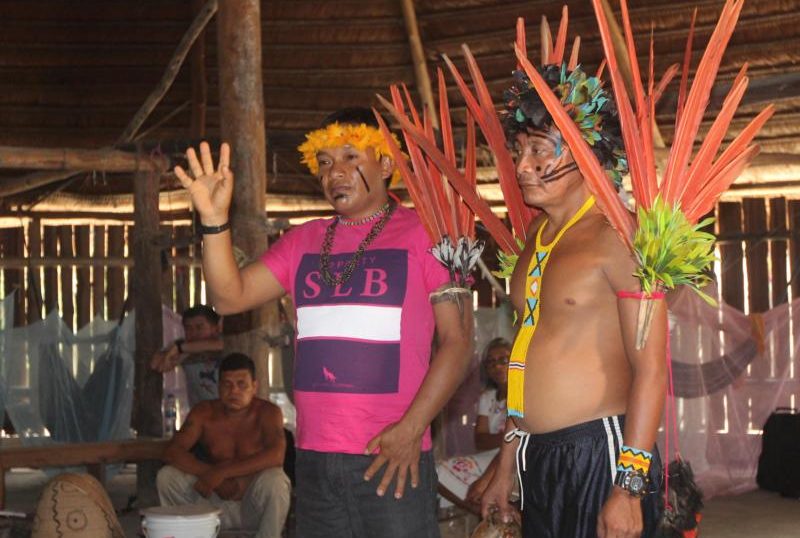 Two Yanomami men speak at a gathering of indigenous people from throughout the Amazon in Leticia, Colombia, Feb. 2, 2019. Rafael Noteno Capinoa, a Kichwa Indian, worries about what could happen to the forest around his village on Peru’s Napo River if an oil company begins drilling in the area. (CNS photo/Barbara Fraser)

LETICIA, Colombia (CNS) — Rafael Noteno Capinoa, a Kichwa Indian, worries about what could happen to the forest around his village on Peru’s Napo River if an oil company begins drilling in the area.

“The forest is where we are born, we grow up, we live, we die and are buried,” he said. “During our lifetime, we use what we find there.”

For the Kichwa and other Amazonian peoples, every plant and animal has a spirit, and humans live in harmony with them, he said. “But if people behave badly, nature may abandon them.”

A year ago, during a visit to Peru, Pope Francis asked an audience of native people of the Amazon basin to help bishops and religious to understand their relationship with the natural world. Since then, church leaders have held more than 40 meetings in the nine Amazonian countries to listen to local people, in preparation for the Synod of Bishops for the Amazon to be held at the Vatican in October. The meetings have been coordinated by the Pan-Amazonian Church Network, or REPAM.

Noteno was among about 70 indigenous people who gathered at a Ticuna and Huitoto village outside this Amazonian town Feb. 2-4 to talk about what they would like the church to understand.

“The Catholic Church is increasingly aware of the many ways in which the Amazon is being destroyed,” said Columban Father Peter Hughes, an adviser to the synod planning committee.

There are “constant threats (against) original peoples whose lands are being taken away, whose cultures are being disregarded, and whose land and rivers, the place where they live, are being destroyed,” Father Hughes said. “The synod is a chance to give voice to the Amazon. The church has to listen.”

The danger is real for Antonio Verisimo da Conceicao, an Apinaje Indian from Tocantins, a state in east-central Brazil. Although the Brazilian government has recognized the boundaries of his community of Pemxa, a dam threatens his people’s water sources, he said, and industrial farms are encroaching on an area that his community has requested for expansion.

He and his son have both received death threats for standing up for their rights.

Parts of the Brazilian Amazon have long been dangerous for people who defend land rights. Sister Dorothy Stang, an American-born member of the Congregation of Sisters of Notre Dame de Namur, was murdered Feb. 12, 2005, near the town of Anapu in the Amazonian state of Para, where she helped small landholders defend their farms and forests.

In 2017, Brazil was the deadliest county for environmentalists, indigenous leaders and other defenders of land rights, with 57 killed that year, according to the nonprofit organization Global Witness.

For da Conceicao and other Amazonian people, “territory is life and life is territory,” Father Hughes said.

The Amazon basin contains the largest remaining expanse of tropical forest in the world. In his encyclical “Laudato Si’, on Care for our Common Home,” Pope Francis highlighted its importance for the global climate, as well as its significance as a home to the region’s original peoples.

Deforestation has been increasing in recent decades, however, as roads, industrial farms and cattle ranches continue to expand. Indigenous territories have significantly lower deforestation rates than surrounding areas and are sometimes even better protected than government-established parks or reserves, studies have found.

Maintaining a traditional way of life in the forest is increasingly difficult, however, as young people often leave their villages in search of jobs or a college education. Facing discrimination in cities, they may conceal their indigenous roots.

When young people move away from their communities, they lose the chance to learn traditional songs, stories and myths from their parents and grandparents. Some never learn their native language, because their parents were forbidden to speak it in school — sometimes even in Catholic mission schools, said Washington Salvador Tiwi Asamat, 45, a Shuar man from southern Ecuador.

Those are values that the church wants to help people recover, said Father Hughes.

Mariela Rivera Diaz, a Yagua woman from the community of San Jose de Piri, in Peru’s northeastern Loreto region, has watched her oldest children move away to get an education in distant cities. Worried that her native tongue might disappear, she began to teach the Yagua language to younger children in her community.

Santiago Yahuarcani, a Huitoto artist from Pebas, a town on the bank of the Amazon River in Peru, began to rediscover his people’s history when he found that tourists were more captivated by his paintings of village life or mythical beings than scenes of forests and rivers.

He encourages young people in Pebas not only to speak their native language, but also to learn traditional music and dances.

As church leaders prepare for the synod for the Amazon, they have much to learn from native peoples whose lives are so closely intertwined with the forests and rivers of the region, Father Hughes said.

“The word of God exists in the air, the water, the plants, the animals,” he said. “It is the Bible of life, the Bible of creation.”