The summit and Sodalitium: Survivor sees glimmers of hope 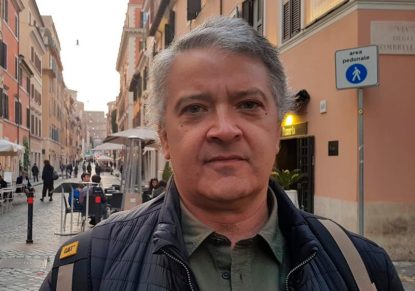 Pedro Salinas, a Peruvian journalist and former member of Sodalitium Christianae, is pictured near the Vatican in Rome Feb. 22, 2019. (CNS photo/Junno Arocho Esteves)

VATICAN CITY (CNS) — The Vatican summit on child protection gave one survivor an unexpected chance to sit down with the Vatican’s top abuse investigator to tell his story, which includes being sued for defamation by a Peruvian archbishop.

Peruvian journalist Pedro Salinas, a former member of Sodalitium Christianae Vitae, was one of 12 representatives of survivors’ groups from around the world who met with the summit’s organizing committee Feb. 20 to tell their stories and share their expectations after years of suffering, grief and anger.

Among the committee members was Archbishop Charles Scicluna of Malta, who handles abuse cases as adjunct secretary of the Congregation for the Doctrine of the Faith.

Speaking with Catholic News Service Feb. 22, Salinas said he was surprised when asked to be among the survivors that addressed the committee given the fact that he suffered physical, not sexual, abuse.

Juan Carlos Cruz, a Chilean survivor, insisted that Salinas be present because the lawsuit filed against him and fellow journalist Paola Ugaz by Peruvian Archbishop Jose Antonio Eguren of Piura is “an example of the symptoms, of how bad the church is acting” toward survivors.

In his testimony to the organizing committee, which he shared with CNS, Salinas told the committee about “the physical and psychological abuses” he suffered at the hands of Luis Fernando Figari, who founded Sodalitium, a Catholic movement, in 1971.

(In the Archdiocese of Philadelphia, the movement administers St. Agatha-St. James Parish, Philadelphia.)

An internal investigation concluded in February 2017 that Figari, who led the organization until 2010, and three other high-ranking former members, had abused 19 minors and 10 adults.

Like many survivors at the meeting, Salinas did not hold back on his criticism of the church’s handling of the abuse crisis and its treatment of survivors.

“The cover-ups were protected, and (Sodalitium), instead of being dissolved, continues to exist with cosmetic changes,” Salinas told the organizing committee. “Why does an organization that protects the cover-up of abuse still exist and with the endorsement of the church?”

Salinas also told the committee members that the lawsuit filed against him and his colleague by Archbishop Eguren compounded “the bland attitude of the church toward Sodalitium.”

Salinas and Ugaz co-authored a book titled, “Mitad Monjes, Mitad Soldados” (“Half Monks, Half Soldiers”), which detailed the psychological and sexual abuse, as well as corporal punishment and extreme exercises that young members of the organization were forced to endure.

Archbishop Eguren, a professed member of Sodalitium since 1981, filed a lawsuit against Salinas for defamation after he wrote a 2018 article accusing the prelate of having known about the abuses.

Salinas claims the lawsuit, though unrelated to his book, is an attempt to punish him for exposing abuse and corruption within Sodalitium.

“While the pope is thanking journalists who have investigated abuses, there is still an archbishop who is going after me,” Salinas told CNS.

Talking about the meeting Feb. 21 with the summit organizing committee, Salinas said that as the meeting was about to begin, he asked Archbishop Scicluna, “Do you know what you are about to face in a few minutes?”

“I really like Archbishop Scicluna because he said, ‘There is no other way to do it. I know that people are coming here angry, I know that they have long-held frustrations and that they are outraged. They have every right to say what they want,'” Salinas recalled.

Because of the abuse he and others suffered, Salinas said he is skeptical of any attempts to reform Sodalitium.

The Peruvian journalist cited a statement Feb. 20 by Sodalitium confirming that the Vatican’s supreme court had rejected a second appeal by Figari against a decision issued in January 2017 by the Congregation for Institutes of Consecrated Life and Societies of Apostolic Life.

Sodalitium said the congregation’s decision banned Figari from living with a Sodalitium community, participating in Sodalitium activities or contacting any Sodalitium member.

Salinas noted, however, that Sodalitium has never stated explicitly that Figari is no longer a part of the organization.

Nevertheless, Salinas said Pope Francis’ actions after visiting Chile in 2018 and publicly recognizing he was wrong to doubt survivors gave him a glimmer of hope.

“I saw a 180-degree change in Chile that made me say, ‘Wow!’ After that, all my criticisms against the pope disappeared, meaning I gave him the benefit of the doubt. I used to think he was just a man of words that didn’t get anywhere,” Salinas told CNS.

The Vatican summit, he said, was “very, very important.”

NEXT: Vatican embassy confirms complaint of sexual misconduct against ex-nuncio