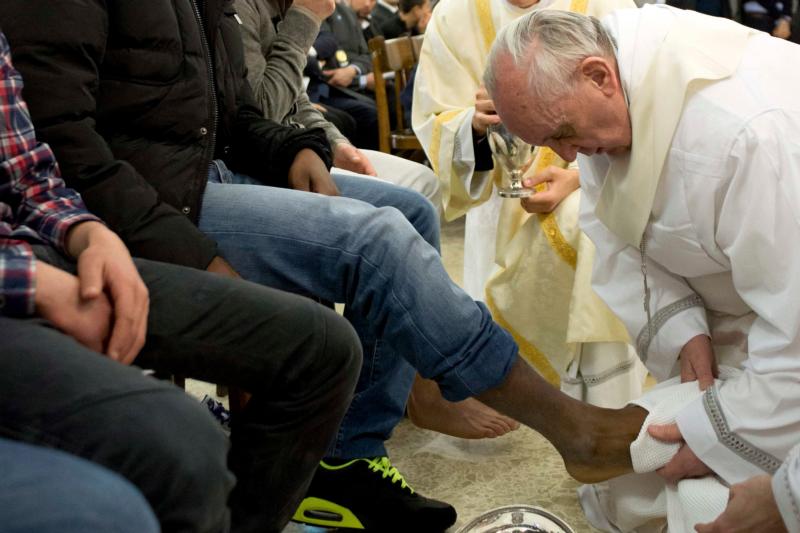 Pope Francis washes the foot of an inmate during the Holy Thursday Mass at Casal del Marmo prison for minors in Rome in this March 28, 2013, file photo. (CNS photo/L’Osservatore Romano via Reuters)

UPDATED – VATICAN CITY (CNS) — Pope Francis and top officials of the Roman Curia will leave the Vatican March 10-15 for their annual Lenten retreat, which will be led by Benedictine Abbot Bernardo Gianni of the Abbey of San Miniato al Monte in Florence, the Vatican announced Feb. 27.

And, as is customary when first publishing the pope’s calendar for Holy Week, the Vatican did not provide the time or place for his celebration of the Mass of the Lord’s Supper on Holy Thursday. Pope Francis has made it a tradition to celebrate the Mass and foot washing ritual at a prison or detention center, refugee center or rehabilitation facility.

Here is the schedule of papal liturgical ceremonies for March and April released by the Vatican Feb. 26:

— March 6, Ash Wednesday, 4:30 p.m. penitential procession from Rome’s Church of St. Anselm to the Basilica of Santa Sabina for Mass with the imposition of ashes.

— March 10-15, Lenten retreat with the Roman Curia at the Pauline Fathers’ retreat center in Ariccia, southeast of Rome.

NEXT: Pope will visit school for imams, migrant center in Morocco