World needs to be healed, not condemned, pope says 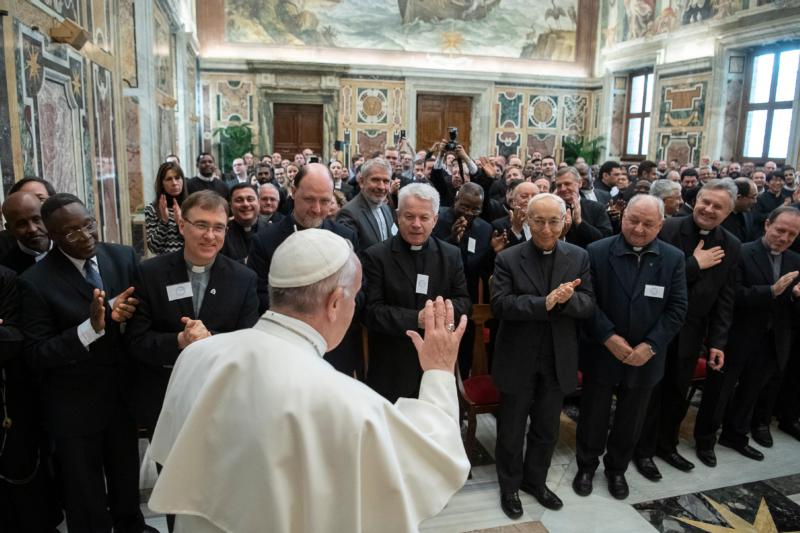 Pope Francis leads an audience with students and staff of the Alphonsian Academy at the Vatican Feb. 9, 2019. (CNS photo/Vatican Media)

VATICAN CITY (CNS) — Taking their cue from Christ, moral theologians can see that people need to be liberated and healed, not condemned, Pope Francis said.

But the earth — humanity’s common home — is also in great need of care, he added, asking that moral theology expand to include an “ecological dimension.”

The pope held an audience at the Vatican Feb. 9 with professors and students of the Alphonsian Academy in Rome, a graduate school specializing in moral theology. The school was founded by the Redemptorists 70 years ago, inspired by the teachings of St. Alphonsus Liguori.

The pope said St. Alphonsus knew what was needed was not defending oneself from the world or condemning it, but working “to heal and liberate, in imitation of Christ’s action.”

The church must give attention to people who are subjected to the many “forms of the power of sin that continue to condemn them to insecurity, poverty and marginalization,” he said.

Moral theologians also should be inspired to face with “great willingness the new, serious challenges stemming from the speed with which our society evolves” and which in turn fosters attitudes of competition, the law of “survival of the fittest” and the “throwaway culture.”

The same attentive response is needed “for the cries of the earth — violated and harmed in numerous ways by selfish exploitation,” he said.

People are missing a sense of their responsibility and their nation’s duty to care for the earth, the pope said.

In all the years he has heard confession, he said, “rarely has anyone blamed themselves for doing violence to nature, to the earth, to creation. We are not aware of this sin.”

Moral theology, he said, must do its part in helping people become aware of the urgency and conviction needed to work together in caring for “our common home through viable ways of integral development.”