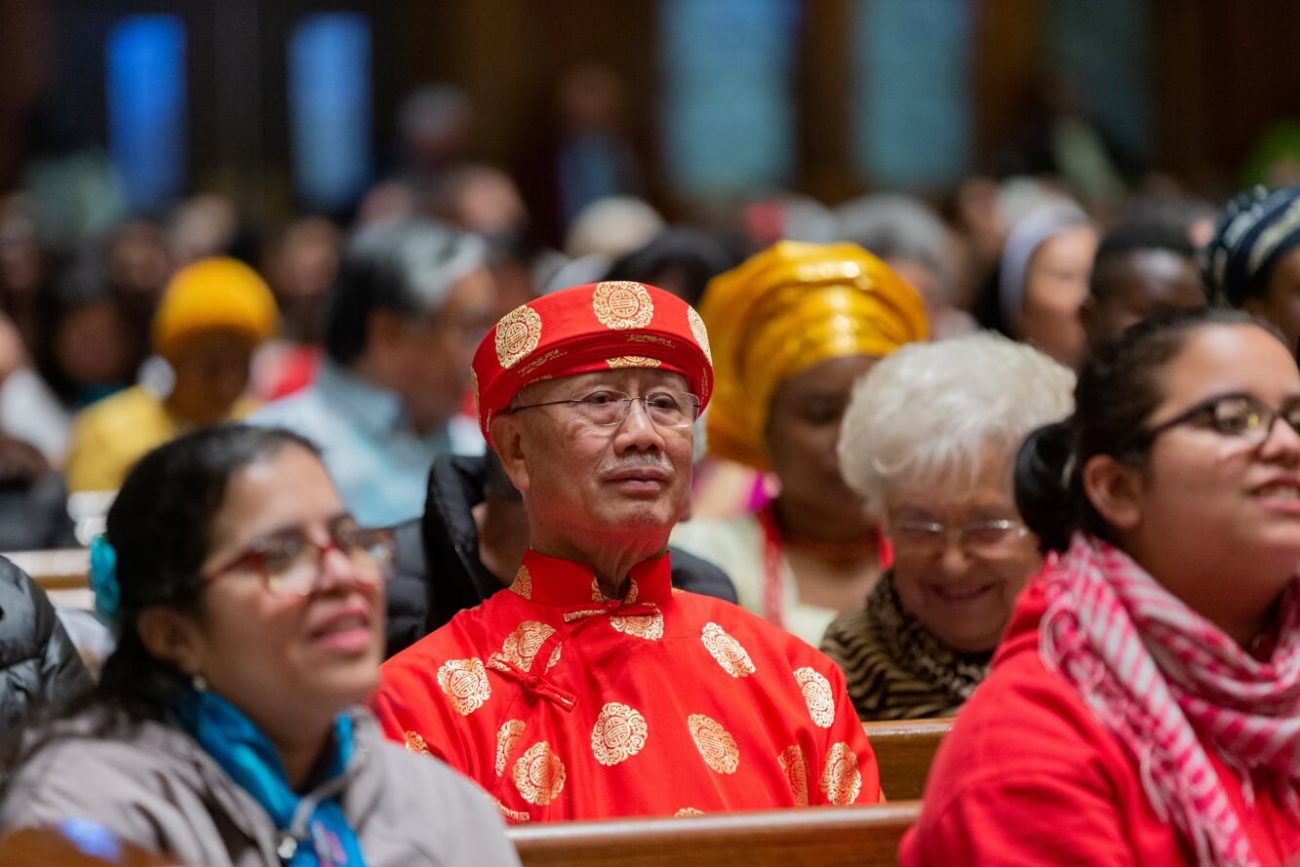 Worshipers share the variety of cultural traditions present in the Philadelphia Archdiocese during the annual Cultural Heritage Mass March 23 at the Cathedral Basilica of SS. Peter and Paul. (Photo by Truc Tram)

When Jesus said, “Go into the whole world and proclaim the Gospel to every creature,” his apostles clearly took that very seriously. Nowhere is that more apparent in the Philadelphia Archdiocese than at the annual Cultural Heritage Mass celebrated this year by Archbishop Charles Chaput at the Cathedral Basilica of SS. Peter and Paul on Saturday, March 23.

Approximately 30 nations were represented with colorful banners and in many cases distinctive costumes. There would have been many more if not that arrivals from Spanish-speaking lands are so numerous they have their own annual Hispanic Catholics Mass at the cathedral.

(See an extensive photo gallery of scenes from the Mass here.)

Pride of place at the head of the parade of nations in the entrance procession was given to the very first arrivals on America’s shores, led by Buffy Red Feather Brown, a Cherokee chief and Philadelphia’s second most famous Catholic Native American.

Chief Red Feather, who gave opening remarks before Mass, used the opportunity to welcome all of the nations and also took the opportunity to express her strong feelings on the clergy abuse scandal that has rocked the Catholic world.

In addition to those in the procession, there were 10 choirs singing in various languages, colorful dancers and readings and prayers in eight languages including Filipino, Malayalam, Urdu, Ghanaian, Vietnamese, Lithuanian, Knanaya and English.

Giving the Mass celebration itself an ethnic flavor was Archbishop Charles Chaput as celebrant, and himself a proud member of the Native American Prairie Band Potawatomi. Adding an international flavor was the presence of Archbishop Roger Houngbedji of Cotonou, Benin, as a concelebrant.

In his homily, Archbishop Chaput took note of the great diversity and wonderful talent at the Mass, but most of all, he said, “a deep kind of faith. Thank you for witnessing to your faith in our Lord Jesus Christ as well as your love for the various cultures and ethnic communities you come from.”

Sam Labou, who attended the Mass with a group of 55 men, women and children from Liberia, explained his group normally worships at Divine Mercy Parish in Philadelphia.

“It’s wonderful we can express our faith the same way we did at home,” he said. Since coming to America he’s lived in different cities but “Philadelphia is the most diverse I’ve seen,” he added.

Father Renny Abraham of the Knanaya Mission belongs to the Syro- Malabar Rite of Catholicism. He’s been in the U.S. for seven years and believes ceremonies like this particular Mass “show the breadth of the Catholic Church. It’s wonderful to see all the different cultures.”

But not everyone at the Mass was first generation Americans.

For example Clare McManus is second and third generation but her Irish roots are still strong, and she is a regular at the annual Mass. “It gets bigger and better organized every year,” she said. “I think its grand.”

Theresa Romanowski is also American born but has never forgotten her Polish roots. “I’ve got family in Poland and I’ve been back six times,” she said. “It’s important to keep our heritage alive and I’ve been coming to this Mass since it started.”

NEXT: Drexel Hill concert bill looks to AbbeyFest, 6 months out