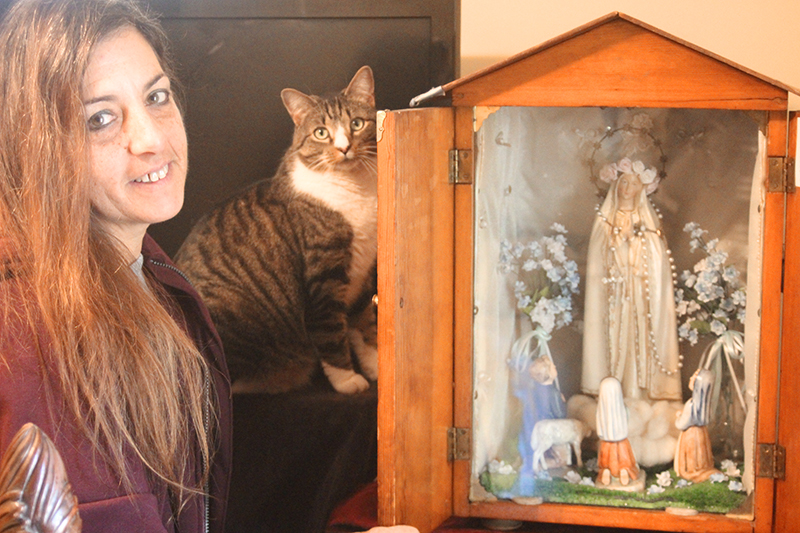 Veronica Nardi has welcomed a pilgrim statue of Our Lady of Fatima into her home for decades as part of a local devotion that spread from St. Nicholas of Tolentine Parish to the greater Philadelphia area. (Photo by Gina Christian)

For more than 50 years, a statue of Our Lady of Fatima has been visiting homes throughout the Philadelphia area, bringing comfort and hope while uniting families in prayer.

The image is one of many such statues circulating throughout the world, but for Anna Marie Cuccio, this Marian figure has been a part of the family for generations.

“My grandmother got the statue around 1960, and she asked my dad to make a protective case for it,” said Cuccio, who grew up in St. Nicholas of Tolentine Parish in South Philadelphia.

Cuccio’s father “wasn’t very handy,” but devised an enclosure for the statue, even using the glass screen from an old television in his basement.

“It fit perfectly,” said Cuccio, who now lives in southern New Jersey. “It was meant to be.”

Cuccio’s grandmother wanted families to share the statue to encourage devotion to Mary and to the rosary.

Marian expert Father Johann Roten, S.M., of the University of Dayton observes that such “traveling Marys” derive from the custom of “shelter seeking,” which recalls the journey to Bethlehem undertaken by Mary and St. Joseph just prior to Jesus’ birth.

Writing on the university’s International Marian Research Institute website, Father Roten said that the practice provides “spiritual compensation” for the lodging that, according to Luke’s Gospel, was denied to the holy family. The Frauentragen of medieval Germany and the posadas of Latino countries are examples of how the practice developed in various cultures.

Shortly after Cuccio’s grandmother died in 1964, her father entrusted the image to Marie Burke, a fellow parishioner who served as Mary’s “travel agent” until Cuccio herself assumed the role about five years ago.

Interested families, drawn into the network through word of mouth, reserve the statue for week-long periods by filling out an itinerary that accompanies the image. The current host contacts the next one to arrange delivery of the statue, which usually takes place on Sundays.

The 20-inch figure of the Blessed Mother inspires calm and serenity in the homes of those who welcome her.

“When she’s in the house, you feel peace,” said Cuccio.

The statue also helps to promote what the Second Vatican Council called the “domestic church,” the experience of faith lived out in the context of the family.

When the statue is at Cuccio’s house, there sometimes “isn’t a seat to be found.” Parents, children, relatives and friends crowd into the living room to recite the rosary, which is followed by dessert and fellowship.

“People have learned to say the rosary as a result of this statue,” said Cuccio, noting that the image “comes with instructions.”

Simply exposing children to such prayer can have lasting effects, she added. At age 4, one of her daughters elicited giggles by her loud emphasis on the words “holy Mary” during the rosary. Years later, the same daughter, like her sister, posed with the statue just prior to her wedding, recalling how she would “say goodnight to Mary” before bedtime as a child.

Cuccio even brought the figure to the post-surgical rehabilitation center where her mother once stayed.

“The nurses would come into the room to pray before her,” she said.

Veronica Nardi and her family have welcomed the statue into their home for years. Nardi’s mother, a Marian devotee who worked for Catholic publisher H.L. Kilner and Co., would set the image of “Our Blessed Lady” on the coffee table then invite relatives and friends over for dinner and the rosary. For the past 20 years, Nardi has continued the tradition.

“Nothing bothers me when I have her here,” said Nardi, a parishioner of Blessed Virgin Mary in Darby. “I’m excited to get her; I feel like she’s mine.”

The statue has been “stuck” a few times on her journey, said Cuccio, recalling how one host kept it for three months, something Cuccio strongly discourages.

“If she’s there all the time, you’ll risk taking her for granted, and you won’t make the effort to say the rosary,” said Cuccio, noting that she now regularly checks up on the statue, which currently travels throughout Delaware, Bucks and Montgomery counties, as well as through parishes in the Camden Diocese.

The end of a given visit from Mary is “bittersweet,” said Cuccio, leaving “an empty spot” in the house. At the same time, Cuccio is delighted that the statue’s itinerary is now booked into the year 2028.

Nardi, a mother and grandmother, has already put in her 2021 reservation.

“Mary is a fellow mom,” she said. “And she has a hotline to heaven.”

PREVIOUS: In time of turmoil, Man Up Philly keeps raising the bar

NEXT: Do less not more this Lent, advises local prof