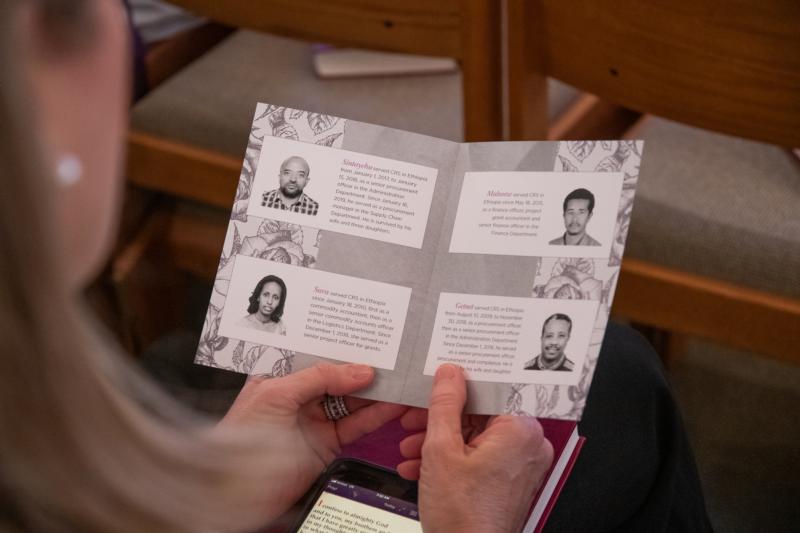 None were more affected than Yishak “Isaac” Affin and Atli Moges by the March 10 Ethiopian Airlines crash that took the lives of all 157 on board — including four who were not just colleagues, but their fellow countrymen and women.

Affin and Moges were part of the standing-room-only gathering at the CRS chapel March 14, when Baltimore Archbishop William E. Lori offered a memorial Mass. His concelebrants included a majority of the 14 bishops who serve on the CRS board of directors, in town for meetings.

Like the four who perished, Moges and Affin are natives of Ethiopia, which has approximately 100 million residents. Almost half lack access to clean water.

Trying to better themselves so that they could better their country, the four CRS administrators were en route to a training session in Nairobi, Kenya, when their flight crashed minutes after takeoff from Addis Ababa, the capital of the east African nation that sits in a region wracked by famine.

“They do their work from their hearts,” Moges told the Catholic Review, Baltimore’s archdiocesan news outlet. “They were the kind of people who stayed in the office until midnight or worked Saturday if that was necessary.”

She speaks from experience.

A senior adviser for CRS in financial technical support, Moges came to Baltimore in 1988, but from August 2015 to March 2018 served in Ethiopia as the deputy country representative for operations.

Managing administration, finance, human resources and IT for a staff of approximately 200 during her time in Ethiopia, Moges said she worked with the four deceased staffers “very closely.”

They were typical of the 7,000 people employed by CRS, which prioritizes hiring and training local people in the nations it serves.

Moges said that Mulusew Alemu, a senior finance officer, was devoted to his Ethiopian Orthodox faith and “a delightful person, very respectful and hard-working.”

Despite his low-key demeanor, she said, Sintayehu Aymeku had “wonderful leadership skills.” A procurement manager who had lived for a time in the United States, Aymeku left behind a wife and three daughters.

“I had high hopes for him,” Moges said.

Sara Chalachew, who once spent three weeks in Baltimore on temporary duty, was promoted last December to senior project officer for grants. Moges said she was always smiling, and “got along with everyone on staff.”

Getnet Alemayehu was a senior procurement officer, known for being patient and persistent while navigating shipments.

Before Affin, a senior accountant, came to Baltimore in 2003, he worked as an auditor in Addis Ababa, where he knew Alemayehu as a driver, albeit one “studying at university.”

As Moges got emotional remembering the four after the Mass, Affin placed his right hand on her left shoulder.

The Mass included a choir comprised of CRS staff based in Baltimore.

Bishop Gregory J. Mansour of the Eparchy of St. Maron of Brooklyn, New York, who is chairman of the CRS board of directors, welcomed Archbishop Lori, who had made a short walk from the Catholic Center, headquarters of the Archdiocese of Baltimore, to CRS.

“Why were such good colleagues taken from us?” Archbishop Lori said in his homily. “A tragic moment such as this, and the season of Lent itself, tests and probes the depth of our faith,” he said.

“It highlights the kind of faith, hope and love — coupled with courage — that undergirds the many risks you and your colleagues take each day to advance the kingdom of justice, peace and love in this world.”

Archbishop Lori said the four employees “died in pursuit of their mission to bring a measure of food security to regions of the world that are habitually plagued by famine. They met the Lord as they were dedicating themselves and their lives to the golden rule.”